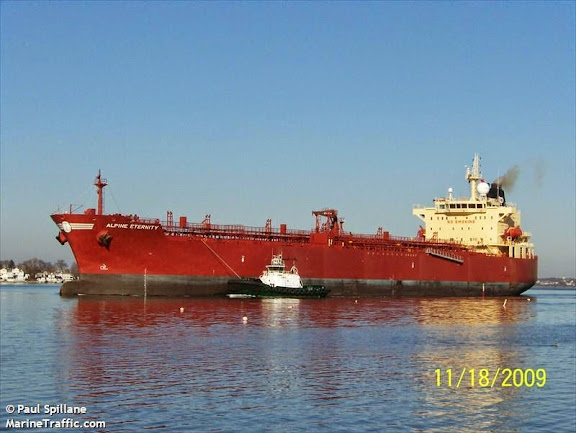 File photo of merchant ship Alpine Eternity, unsuccessfully seized by IRGC-N on 14MAY15


For the second time in two weeks, Islamic Revolutionary Guard Corps Naval patrol boats confronted a commercial ship moving through the strait and ordered it into Iranian waters on Thursday, according to U.S. officials.

Three IRGC naval patrol boats ordered the tanker to shift course and head into Iranian waters, U.S. officials said. When the commercial ship’s crew refused, the Iranian boats fired warning shots to try to force the Alpine Eternity to follow their orders, according to the U.S. military and officials with the ship’s Norwegian operator.

When that didn’t work, the Iranian boats tried to “disable” the Alpine Eternity, apparently by opening fire with machine guns directly at the ship, said one U.S. official.

The Iranian boats then pursued the commercial vessel for close to an hour as it headed for port in the United Arab Emirates, American officials said. The Iranians broke off pursuit only when the U.A.E. Coast Guard ships came to the aid of the Alpine Eternity. Kai Bjorkelund, director of Transpetrol TM AS, the Norwegian operator of the Alpine Eternity, said the crew was safe and the Iranian boats caused no damage to the tanker.

COMMENTARY: Evidently IRGC-N have determined a more assertive stance in the Persian Gulf is in order; this being the second time in a matter of weeks this navy has played the role of sheriff in attempting to collect debts Iran claims are owed from shipping companies.

From the U.S. military-provided description of what took place, it sounds as if IRGC-N utilized HSPBs in what turned out to be an unsuccessful ship seizure operation. Using Thondar-class missile craft would have enabled IRGC-N to utilize a Type 69/AK-230 type fully automatic naval twin 30 mm gun, potentially escalating tensions even further. Admittedly, type of vessel(s) used in the operation is speculative given the highly generalized details that have been provided to the press. Nevertheless, the potential use of BuMusa (Abu Musa) in this attempt serves to illustrate the inherent tactical advantages that island provides Iran’s IRGC-N, and the underlying discontent this causes to GCC.

It may well be IRGC-N feels compelled to take a more assertive, challenging role in the Persian Gulf, while USN and the Saudi-led coalition have taken such an active military role at the Gulf of Aden. Noteworthy also is that both Maersk cargo ship and Alpine Eternity transited GCC ports (see table below), for it's understood IRGC discerns the Yemen revolution and conflict within their own historical experience of Iran's revolution being defended against what they term the Imposed War of 1980-1988.

The incident may also be revealing in that U.S. officials (not Iranian officials) went public with details of Iran’s compensation dispute with Alpine Eternity and Transpetrol TM A, suggestive of a direct, diplomatic communication between the United States and Iran, which if indeed did take place, might not have been so readily possible prior to nuclear negotiations undertaken since 2013. 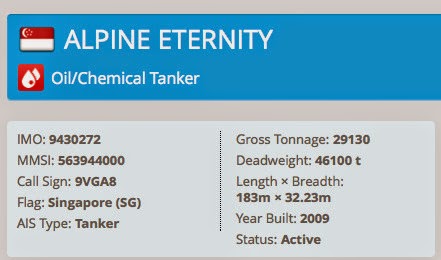 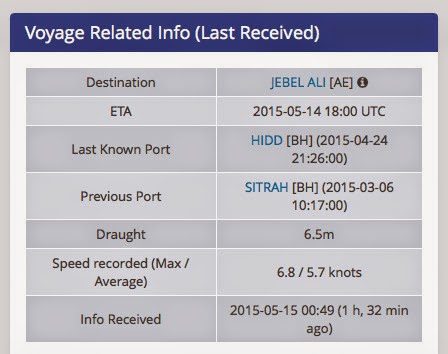