‘Issue in Arab-Iran Relations is Iran’s Desire for Expansion’ 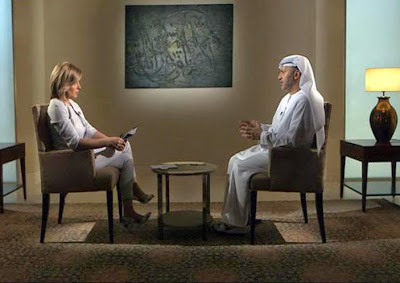 UAE Minister of State for Foreign Affairs Anwar Mohammed Gargash said today a political solution in Yemen “is possible without Iran.” Gargash made the comments during an interview on Sunday with Sky News Arabia.

Gargash added that presence of Hezbollah-like militias in Southern Arabian Peninsula is not acceptable, and that the Huthis could be part of the political process based on their real size and not on their arms.

On the upcoming summit at Camp David, Gargash said, “The GCC leaders will demand a political commitment from the United States that guarantees that the results of its (nuclear) agreement with Iran will ensure that Iran’s policy will be less expansionist and will respect its Arab neighbors.”

If they think the war at Yemen can be resolved diplomatically without Iranian participation, they have another thing coming.

I understand that they're concerned about Iranian meddling in their backyard, but they've already punished Yemen (Ansarullah) for its alleged connection to Iran. If Ansarullah's power survives this war, and there's every reason to think that it will, the PGCC's Iranophobia will have made Ansarullah more, and not less pro-Iranian.

Yea...right. They were saying the same thing about Syria...and look how that is developing. Sadly the Yemeni conflict will continue.

When you have politicians from a small made up country that didn't exist over forty years ago dictate their political opinions about a country in the region that has existed in some form or another in the past seven thousand years.Then you just know that the people in charge in that great old country are the wrong ones in political control.

Indeed, proclaiming that Iran is the root cause to every problem in the ME, disqualifying its existence as outright negative, dismissing any of its possible roles in resolving conflicts, and refusing to even come to some kind of compromises with it in order to find common, viable ground for Yemen to have a chance to be "normal" again, sure is the way to move forward in a constructive way in such a troubled region where once again, civilians and civil society are bearing the brunt of an ongoing, devastating bombing campaign that goes unabated despite so much documented suffering by the UN.

And when you think that the main patrons of the official's country behind these claims counts among the regimes that have been renowned at persistently funding and supporting the worst kind of reactionary paramilitary groups in the face of sometimes secular regimes (as in Syria) or at least more tolerant and realistic than their proposed nihilistic, head-chopping, mass-raping and women-solding Salafist alternatives (as in Iraq), and that Iran technically happens to be currently supporting, it almost becomes laughable. When it comes to desirable outcomes and lasting political solutions being at the advantage of local peoples and not regional interests, Gulf monarchies may well be the last regimes on Earth with an ounce of legitimacy to point fingers at let alone impose their will on anyone posing as wannabe sages in interviews. Iran might be as much cynical and vicious in its own calculations in supporting undesirable entities such as expansionist Houthi religious radicals in this particular affair and way out of their league considering their ambitions, and where I personally think they should entirely back away, but again : who exactly isn't right now ? from western powers to Russia and the whole ME counties engaged in power-play today, give me ONE actor that can be considered selfless and humane in its objectives, making the lives of the innocents its primary concern on top of its agenda ?

This man is none to lecture Iran considering what himself and/or his principal allies have been doing lately in the region, and that is a fact, and this no matter how guilty the IRI might be of fanning the flames here. The people of Yemen would be quite a more appropriate group to understandably yell in anger against Tehran if they wish so, while also rebuilding their homes destroyed by Gulf States, of course.