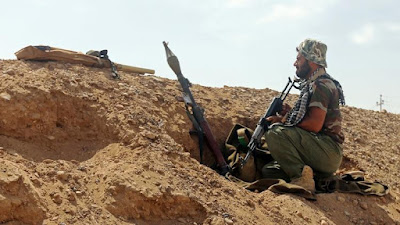 Note: Iraqi government should be applauded for its action. The fight to liberate Ramadi is for preserving the Iraqi sovereignty and not for sectarian gain by extremist groups within the anti-ISIL coalition.

Disaster in the house of Islam !,A brother aiming his weapon to a brother !.

Disaster in Islam ,when the real enemy sleeps happily without any bother !.

Disaster in the world ,when intolerance,savagery is mistaken for Islam while in reality Arab-ism is its mother !.

The whole world and Muslims included MUST HEED THE words of the Mercy upon mankind !.

Nader, we can say all we want about whats right or whats not right but the fact seems to be that Iraq as 1 country is history so what will this operation name change achieve? lets be realistic. Sunnis will never fully integrate into Iraq because Saddam is gone and Shiites wont s hare enough power to make sunnis comfortable.

Religious war is wrong, no matter where. Sectarian extremism should be opposed, no matter where, as it's a prelude to religious conflict, which are easy to start but extremely difficult to end. Shias and Sunnis have lived in that part of the world for some 1,400 years. Iraq, as a unified country, might not last, but Sunnis and Shias should oppose sectarian extremism within a united Iraq or outside of it. The outcome of a religious war is a lose-lose situation for all.

Tell that to the sunnis [ISIS]