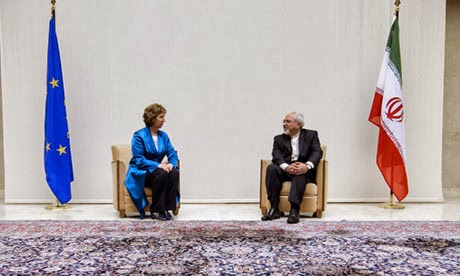 The Geneva talks are ending today after Iran concluded its detailed proposal for nuclear deal. The next round of talks will be held soon in Geneva, reportedly on 7-8 November. The P5+1 would then present its response to the Iranian proposal to end the decade-old nuclear impasse.

Zarif’s PowerPoint presentation on Tuesday laid out a roadmap, which reportedly envisages an initial confidence-building period of six months, when undisclosed limits would be put on Iran’s uranium enrichment program in return for some sanctions relief, the Guardian reported today. The follow-up second and third stages will lead to “a new equilibrium in relations between Iran and the rest of the world, in which Iran continues to enrich uranium under agreed limits but without sanctions.” (The Guardian, 16 October)
Iran’s Deputy Foreign Minister Abbas Araqchi is quoted as saying the proposal would include Iran’s acceptance of “Additional Protocol,” an intrusive inspections regime by the International Atomic Energy Agency (IAEA). Araqchi’s announcement of the proposed inspection regime is the single most important development yet reported. It will break years of paralysis that gripped previous rounds of negotiations.

A number of important issues need to be resolved at the end of the process, but the two sides seem poised to strike a final deal within months. Among the issues beyond the acceptance of “Additional Protocol,” are the limits on uranium enrichment and the plutonium-based IR-40 reactor in Arak.
Photo credit: EU foreign policy chief Catherine Ashton sits with Iran's foreign minister Mohammad Javad Zarif at the start of two days of nuclear talks in Geneva. (Fabrice Coffrini/AFP/Getty Images/The Guardian)
Posted by Nader Uskowi at 9:53 AM

The West will respond to this "Irani bazi" by ignoring it, as every one should when Iranians try to display their "cleverness." In other words, there will be zero sanctions relief as a result of this, and there could possibly be increased sanctions, until the Nov. meeting occurs. In other words, this meeting accomplished absolutely nothing, despite Iranians' delusions that they have somehow fooled the west.

" ,,,,, but the two sides seem poised to strike a final deal within months."

THIS is what Borger in The Guardian actually reported ..... and it's not quire as Nader Uskowi's reading causing him to suggest.

the real report notes that if this preliminary deal can be reached........ there is still nothing beyond this, in those fuzzy second and third stages, that is even in vague form close to agreed upon.

nor is it yet clear that there is any agreement on even the partial sanction relief in the six months following the Iranian acceptance of the Additional Protocol.

what we've got, and it IS important, is an offer that might start some serious progress....... what we don't have is any deal or any reason to think that a final deal is soon to come.

Even harder sanctions must be introduced. The regime can not be trusted in any shape form or colour. They need to be hammered untill they turn into Goosht Koobedeh.

What the heck Iran Bazi? are you Iranian? at least if your gonna use Iranian term say it right instead of embarrassing yourself.

look at the US and Government Shutdown, and you know who is Goosht Koobedeh.

The Sanction sare not very relevat
every sancton becomes ineffective or bypassed during the time
The iranian economy has already overcome the schock of last sanction
the oil revenue are raising, Rial is raisng and 2014 we will have 1,5% growth
more imporetant is that right of the Iran be officially recognized.
if this happens then the US congress or US senat can decide any sanction they want
the world will not follow

they be lying or whatever. however, US even called it constructive and positive. so Iranians are either telling the truth or playing the lying game pretty well. In RealPolitic both sides lie. Politics is all about 90% babble and 10% actual work. Having said that the ones in the corner are Iranians not P5+1 and they have created this status quo themselves for the past thirty odd years since these idiots have come to power.

in the final analysis, it's up to the Iranians to crush their theocratic oppressors.

The Guardian was the source of the reports from Geneva, and those parts clearly marked and credited. You are referring to the last paragraph that is this blogger’s take on what happened in Geneva. The Guardian is not the source of my analyses!

Anon 4:13 PM....In a democracy shutdowns are part of the package.If that happened in IRI there will be a basiji lynch mob out to crush it out of fear. There lies the lynch "law" of the theocratic dictatorship.

Anon 4:20 PM....Go and tell that to the Iranian people that the sanctions are not "relevant". What "iranian economy"?

Anon 5:45 PM....Agree. But the regimes financial resources are used against the Iranian people.Once the theocratic oppressors resources are limited their goons might come to their senses.