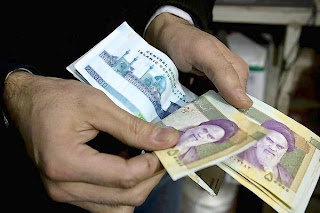 Iran has not paid back any of its loans to the World Bank for more than six months, the bank said today. (Reuters, 18 July)

The non-payment of World Bank loans is yet another sign of the economic woes the country faces. The sanctions imposed against oil and banking sectors, along with the mismanagement of the economy by Ahmadinejad’s government, seem to be the main factors in the worsening economic situation in Iran.

The World Bank said it was placing Iran's loans in “non-performing” status, as it must do when a country has not made any payments for more than six months. Iran owed the bank $697 million on June 30, of which $79 million was overdue.

The non-performing designation from the World Bank, often a lender of last resort to cash-strapped governments, means Iran may find it even harder to get money from commercial creditors.

Zimbabwe is the only other country beside Iran that is in non-accrual status - it has not made any payments to the World Bank since 2000.

Juxtapose the indebted economies of developed countries such as Canada, Australia, Germany, United States, South Korea, Italy, France, Spain, United Kingdom, Japan, to that of Iran. All carrying heavier external debts than Iran. Iran has the third lowest percentage in terms of debt to GDP ratio.

the failure to pay on the loans isn't a sign of Iran's struggles, but of Iran's truculence.

Yeah sure, deadbeat US cities like Detroit, Jew York are not only in default but BANKRUPT. However, the US will print more dollars so that the Chinese will open more dollar stores and then use them as toilet paper. On a more serious note, World Bank and IMF are Zionist controlled fronts to impoverish the third world. US has over $33 billion in current value Iranian assets that were frozen when Mr. Pahlavi took flight, give them back, lift the illegal sanctions and then Iran may consider funding Zionist stooges at IMF/World Bank. They add no value and have not given Iran ONE RED CENT since 1979 in loans or assistance. I say stuff the World Bank and its scamming Zionist banksters like Wolfowitz and while at it, stick the UN too and its pet monkey Ban ki Moon where the sun don't shine.

How would Iran be able to pay when illegal banking sanction is imposed making payment to foreign entities using hard currencies practically impossible. In the case of Iran, non payment is not an indication of poorly performing economy.

The decision of Iran govt not to pay can be estimated from two angles:

1) An intentional or delibrate attempt punish the world bank for west's banking saction.

2) To prevent starving their domestic operations of hard currencies further.

Iranian govt will surely take the country through this difficult time with prudent and careful planning.

Khamenei is finally happy; He will now go paradise because has bankrupted Iran whose (cultural, political, economical) destruction he saw as his Islamic duty all along; now they can sell its parts to China

No thanks to the mullahs Iran has become a deadbeat bankrupt country.

It seems this has more to do with sanctions imposed on irans financial institutions making it very difficult if not impossible to actually transfer the funds rather than any lack of funds per se,and anon 10:58 PM makes an excellent point iran despite the sanctions is in far better shape economically than most of the west

why Iran should pay to those mother f.cker ?

One of the sayings of Khomeini.

Iran can't transfer $ due to unilateral sanctions by US so an excuse by iran not to pay the loan n it doesn't mean Iran is bankrupt.

I'm sure they have been doing a lot of that in Evin prison.

Payments to the UN and its agencies, including the World Bank, are except from the sanctions.

Sorry for misspelling: Exempt not except.

They may be exempt from un sanctions but are they exempt from us/european sanctions?,you see if iran cant use the international banking system then how is it supposed to make the payments.In theory quite a few things were supposed to have been exempt from sanctions but often these sanctions were deliberately very vague,so suppliers didnt want to run the risk of doing business and then possibly falling foul of the us and its punitive measures.Heres my solution if the world bank really wants its money it can send a representative to iran to physically collect the money and arrange its transportation in person.Personally I think that at this time of cold war with the threats to irans security and even its national survival potentially being at stake it seems stupid if not criminal to waste hard currency reserves paying off loans to an enemy,the money could be better spent improving irans military and civilian infrastructure

http://www.youtube.com/watch?v=y5hvSwmCplE --- New round of US sanctions against Iran

“Criminal” is the wish to continue what you describe as this “cold war.” Iranian leadership, as the citizens demanded it in last month’s election, should want a normalization of relations with the West and an end to the sanctions. Doing so requires the country to re-enter the global banking system.

The Iranian people spoke clearly last month. My advice to you is to avoid using terms like “criminal” in describing programs that fall within the normalization of relations with the West. The extreme right in Iran and its representative received only 11% of the votes last month. Empty sloganeering should be set aside and the country should unite under a moderate agenda to end the economic woes and political isolation.

It is the west who is continuing the cold war,they are the ones placing sanctions on iran and demanding it surrender its rights,perhaps you favor iran surrendering to the wests demands?,I think you`ll find tho` that neither the moderates or the hardliners favor that course of action