Iran Accuses Netanyahu of Being ‘Warmonger’ 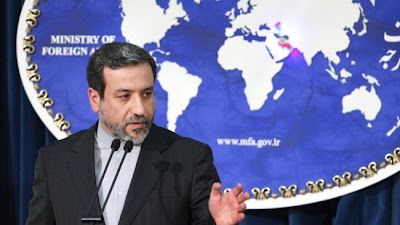 Iran's Foreign Ministry spokesman Abbas Araqchi today accused Israeli Prime Minister Benjamin Netanyahu of being a “warmonger,” trying to destroy Iran's relations with the rest of the world. Araqchi made the remarks in response to Netanyahu’s interview on Sunday with CBS’ “Face the Nation,” in which he said Israel’s clock for action against Iran’s nuclear program was running out.

Araqchi said that Israel is upset over the victory of Hassan Rouhani in the presidential elections, and that it fears that the international community will relax its pressure on Iran in order to create a better environment for negotiations with the new president. (IRNA, 16 July)

Netanyahu has said Iran's nuclear policies were unlikely to change under Rouhani who has been Iran’s chief nuclear negotiator for 16 years, and the supreme leader’s representative at Supreme National Security Council since its inception 24 years ago.

Netanyahu is really scared of Iran election outcome. He is so skeptical and fears that Iran may eventually find escape route which he detests. He hate to see a powerful neighbour that might likely checkmate it atrocities.

Mark,
The Iranian leadership’s responsibility toward the country and its security far exceeds Iran analysts', including professor Cole’s. The ten reasons given here theoretically make so much sense, but they are still theory. I am sure Netanyahu’s speeches are taken seriously inside Iran, as was the case with Iran’s ministry of foreign affairs response today. That’s the only responsible thing to do.

Netanyahu's speeches are TAKEN SERIOUSLY inside Iran, like ilustrated by the following events:
- that the majority of Iranian population has elected Mr Rouhani, who was described by that zionist (Netanyahu), that Mr. Rouhani is a "wolf in sheep's skin"...(against israel),

- and by the event that Mr. Rouhani has recently said that "...efforts should be made to understand the enemy and their plots and to take the measures necessary to foil those plots."

The simple FACT is that the Zionist usurpers of Palestine are becoming increasingly isolated in the world along with the US stasi police state. Most Europeans are sick of Jew fiscal scamming Banksters and the Zionist global snooping blueprint. EU has openly condemned Zionist treatment of Palestinians, particularly the recent arrest of a 5 year old boy for "throwing stones" at Zionist occupation troops. EU diplomats have called for financial sanctions and travel bans on Israeli settlers in a last-ditch effort to save the Middle East peace process.

Most rational people now discard Zionist nonsense about military "attacks" on Iran as hot air, and the grown-ups know that 5 million imported Zionists thugs with no roots in the region will simply not last in an indefinite war of attrition with Iran.

From crypto-Zionist left-Bolshevism and right-Neoconservatism in the Diaspora, through naked Jewish national socialism in so-called Israel, Judeo supremacist (Zionist) movements have murdered and terrorized millions in pursuit of a messianic, "Chosen Race" agenda. They will continue to kill until the Judeofascists and their agents, allies and accomplices are identified, exposed and isolated.

The Zionist take-over of US and their police state agenda is only stoking more anti-Jewish sentiment again as it did prior to WW1 and WW2. The Jews with their arrogance and greed are their own worst enemies. This idiot Nothing Yahoo has been bleating anti-Iran mantra for decades now and simply does not have the guts to even launch a simple bullet in Iran's direction, let alone launch a full scale swan-song war. Zionist warmongers are trying desperately to get the gullible US rednecks into a suicidal war with Iran, but that is not going to happen for obvious reasons: US IS BANKRUPT, BROKE & LOST 2 MAJOR WARS IN A DECADE and SADDLED WITH $16 TRILLION DEBT, most owed to China and rising Asia. US has 100 million on foodstamps and final war will totally nail its coffin forever. Zionists are on stolen land and on borrowed time anyway.

thanks MARK ! for bringing this one on the open,Ramadhan Kareem!.

Iranian President-elect Hassan Rouhani said on Wednesday it was laughable for Prime Minister Benjamin Netanyahu to say that Tehran was getting close to Israel's "red line" over its nuclear program and derided the Jewish state's ability to strike Iran.

"There has been a lot of talk that this option is on the table," said Rouhani, referring to Israel's veiled threats.

"You laugh when you hear them," Rouhani told veterans of the 1980-88 Iran-Iraq war. "Who are the Zionists to threaten us?"

What a schizophrenic diatribe! The secular Jews in general are well-educated, intelligent, intellectuals, rich and powerful, contrary to the majority of backward Muslim countries and that is why you hate them. Very simple.

Is there no time and a space; for the authors, to specify and describe those "ten reasons".

There are no "secular" Jews, they are all Zionists and are generally hated more in the "west" than in the Islamic world. When you are able to read and write you will realize that it was the Europeans who killed Jews and initiated pograms due to Jewish manipulation of their economies and also Jewish devious arrogance. To get them out of Europe, the always conniving Brits created the "Zionist homeland" in Arab Palestine as an eternal source of divide and rule conflict. The Zionist situation is untenable and the Jews are again being universally despised. Have a grown-up help with with googling anti-Jewish sentiment in Europe, particularly Germany and Eastern Europe. All these atrocities towards Arab women and children and ponzi financial scams are not going to help you hasbara idiots. My sincere advice: pack up and go back to the ghettos and stick to selling gold and "jew-elry" in Brussels and Warsaw. You know the old Shakespearean Jewish Shylock pound of flesh and all!

Not every jew is a zionist and not every zionist is a jew,by making that mistake you only help the zionists

Nutty nutanyahoo and the zionist regime are well known as warmongers. Their entire 65 years of existence have been nothing but conflict.

Having already deployed their cartoon bomb, what will nutty nutanyahoo and the zionist regime do next? Drop an Acme brand anvil?

How about the Islamic regime's "atrocities" against its own people? Don't you think that they should be checkmated by more powerful countries?

Israel will have the last "laugh" in this matter.

Don't worry pal because the Islamists are quickly filling up the shoes of Jews as being the most hated in Europe.I rather live next door to a "Jewish Shylock" and "hasbara idiots" than some hateful Islamist terrorist that might plant a bomb in a bus and murder our children.Now be a good little bigot and go back under the stone you came from and stay there!

Most of the world would disagree with your hasbara rant. The Zionists are digging their own grave as hatred towards them is on the rise as always in history.

Anon 7:53 AM. Nutty nutanyahoo has made the zionist regime an international laughing stock, with his cartoon bomb.

The only "good little bigot" here is you,as for the "Islamist terrorist" you`ll find most of them and their wahabist doctrine are courtesy of that western ally saudi arabia

Your kind is no different than those Wahabists and skinhead Nazi.All your diatribes are full of bigotry.

When it comes to Acme brands the Islamic terrorist regime has dealings with them all the time.

" Most Europeans are sick of Jew fiscal scamming Banksters and the Zionist global snooping blueprint. "

most everyone is sick of bigoted bullshit such as this, you enfecalated lune.

Iran's newly elected President Rowhani yesterday detailed the key elements of his foreign policy and said he would support Iran’s alliance with its Lebanese Shia ally Hizbollah as well as strengthen its historic alliance with fellow Shia run government of President Bashar al Assad in Syria. He further stressed that Iran will remain a staunch member of the resistance front against the Zionist entity. Rowhani, scheduled to assume office on Aug. 4, also dismissed the prospect of an Israeli attack on Iran’s nuclear facilities.

“There has been a lot of talk that this option is on the table,” Rowhani
said. “You laugh when you hear them. Who are the Zionists to threaten us?”

The zionist regime leads the world in cartoonish stupidity.

Anon 10:39 AM, that describes the people being supported by the USA to fight in Syria.

http://www.youtube.com/watch?v=tMtrCzDVE0s --- "Iran has questions to answer if it wants to be free of suspicion", IAEA Chief Yukiya Amano.