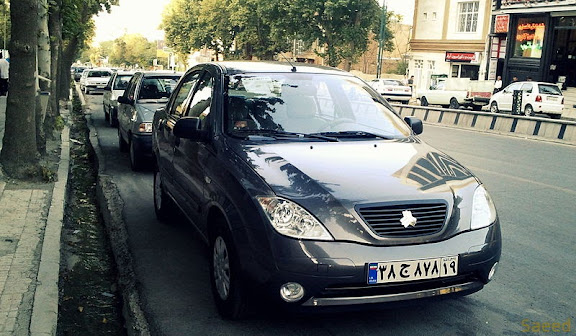 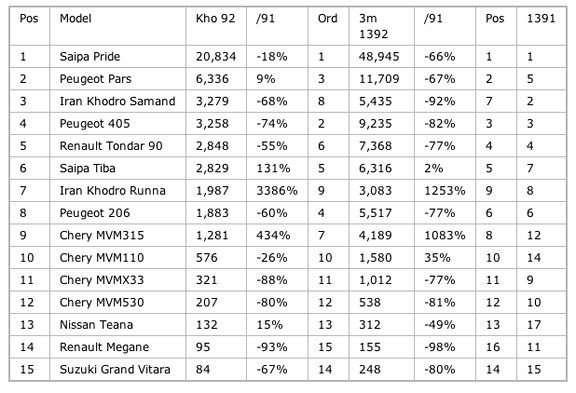 Because at the same time last year they were either still kick-starting their production or had it interrupted, both the Saipa Tiba at #6 and 2,829 units (+131%) and the Iran Khodro Runna at #7 and 1,987 (+3386%) post impressive year-on-year growths, however they remain far from their best monthly volumes. Notice also the Chery MVM315 (aka Fulwin 2) at +434% year-on-year, however the Khordad 1392 production figure is estimated and will be confirmed next month.

Due to sanctions, Iranian car production continues to adjust away from Western and towards Asian model types. Barring a rapprochement with the West, this trend will continue.
Posted by Mark Pyruz at 4:10 AM

When are you going to move out of the West and to Asia?

when a single model represents half of all auto production in the country, it indicates either that the choices are very scant or that the sales are in large part NOT to private citizens but are institutional sales.

and when sales of that model are down 18% it just might indicate that there is a serious problem with the economy of that country.

these are very small overall numbers. overall yearly production of half a million autos for a nation of eighty million people indicates wide-spread poverty.

The way things are going,Iranians are fast heading towards ownership of stray donkeys in the very near future.This is the result of bringing in a band of criminals and bandits to govern the country.

owning stray donkeys would be a step up for the people. right now, Iran is governed by donkeys.

Glad to see production getting back on track after the disruption caused by the idiotic sanctions,hopefully iran has learned that relying on others to supply components or kits is an unsound policy.In future iran needs to ensure the production of all necessary components in country,it also needs to start moving to non western designs and components and should begin work on completely indigenous designs.Iran should also remove the "renault" and "peugeot" names from these vehicles