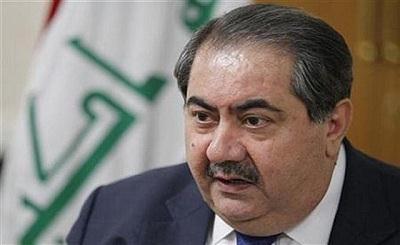 Iraqi Foreign Minister Hoshyar Zebari said in an interview with pan-Arab daily Asharq al-Awsat on Saturday that Iraq is unable to stop Iran transferring weapons to Syria through its airspace.

“We reject and condemn the transfer of weapons through our airspace and we will inform the Iranian side of that formally. But we do not have the ability to stop it,” Zebari said. “If you imagine these flights breach United Nations Security Council resolutions banning weapons imports and exports from Iran... I invite you in the name of the government to help us stop these flights across Iraqi airspace,” he added. (Asharq al-Awsat/Reuters, 13 July)

Zebari said Iraq does not provide any weapons or money to Syria and, despite requests from Damascus, does not sell it crude oil at preferential rates.

No kidding! Iraq is itself sending thousands of fighters into Syria not to mention the Wahabbi freaks from al-Anbar.

In other words, the Iraqis are asking for their overdue American-made F-16 fighter jets.

This is not what he said at all,

He said we did stop and asked to be shown and all we found was humanitarian things,,,

now, we can NOT keep asking the Iranians to land, this is damaging to our relations and we have had no evidence of any shipments or wrong doings on the part of the Iranians.

Those who claim otherwise!!! Can come and stop them themselves, we cant .

I am amused at the distortion of some of the news agencies on this.