'Art of Interaction is Continuing One's Own Path' 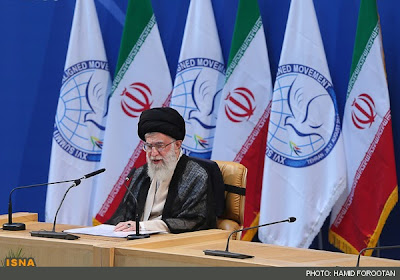 Iran’s Supreme Leader Ayatollah Ali Khamenei said today he would not prohibit talks with the U.S., but urged the authorities, presumably the incoming president Hassan Rouhani, to be cautious in any possible dialogue. Khamenei said he continues distrusting the American government, describing the Americans as “untrustworthy and illogical.”

“I said earlier this year that I’m not optimistic about talks with the U.S.,” said Khamenei, “although I didn’t prohibit dialogue on specific issues such as Iraq in the past years.” (khamenei.ir/AFP, 21 July)

“Americans are untrustworthy and illogical. They are not honest in their dealings,” Khamenei added.

The president-elect, Hassan Rouhani, has pledged to follow a path of moderation and interaction with the outside world. Khamenei seemed to be counseling to him that he could keep talking to the Americans as long as such talks does not affect any of Iran’s policies, or what Khamenei called “the art in the interaction with the world.”

“Americans are untrustworthy and illogical. They are not honest in their dealings,”
I think thats really all that needs to be said

Of course Khamenei is entitled to his opinion. But the interesting thing about his speech was that he was publicly saying that the ‘art’ of interaction/negotiation is to just engage in talks but continue with one's own policy. Such proclamation by the country’s leader in a policy speech is amazing, especially when discussed in the context of untrustworthiness.

Even an ADD child on Ritalin knows that as long as Zionists have total control over the paranoid US stasi failed state there is less than zero chance of any improvement of relations with Iran. Zionists are in the desperate end game in the region as US is imploding and the "Arab Spring" is having unintended and unforeseeable consequences. The region is heading towards a major conflagration and at least another 2 decades of destabilization. The whole area will look different in about a decade and the US will be total third world deadbeat by then.

Khamenei was defeated by Saudis in Egypt; he was defeated by Saudis in Syria - now Assad siding with the new Egypt, along with Saudi Arabia and Israel declaring political Islam (Khamenei) dead; that is the foreign policy of Khamenei defeated every where; and at home he steals elections, ruins economies and silences an entire population; that is the testimony he wants to continue ...

What happened to the notion of compromising for the sake of the entire nation and not be so hard-headed.

Political Islam of cannibals, child killers, rapists and murderers of minorities, paid to fight in Syria by the USA, is dying.

That sort of "sh!t" as you put it, is a Saudi thing supported by the USA. It is not Iranian and has nothing to do with Iran.

Nader UskowiJuly 21, 2013 at 8:24 PM
I think he made it pretty clear that there will be no deviations in irans current policies talks or no talks and that he himself has no faith or trust in america or its words,hes made it pretty clear that its not americas words that matter but its actions and so far there has been no change in either and iran is not going to change its policies in the faint hope the us will reciprocate

Supreme Leader Khamenei, is not only etitled to his opinion, but he is correct in his description that they (West, Americans) are not honest in their dealings.

One doesn't need to pretend to be an "impartial", and divert attention from facts of the last 34 years,....because they spell proper conclussions; for any decent and educated person, who should be blamed for....

Of course there are always "educated and wise" people who will create their "opinions" for money...according to someone's political needs