Ahmadinejad to Build a Technical College 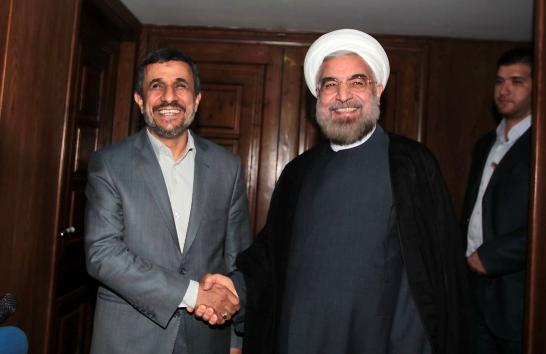 His biggest challenge would be to recruit the calibre of scientists needed to head these leading edge science specialities. No scientists in his/her right mind want to be associated with a man who once claimed to be in an "aura of light" when addressing UN general assembly. A delusional optimist with a touch of narcissism.

Looks like you are in need of your meds.

Like the photo has been showing, the new president-elect Mr. H. Rouhani has no problems with your delusions and is not ashamed to joyfuly shake hands with Dr. Mr. M. Ahmadinejad...

Even author of this article and maybe some "annonymus" comments claims to be a "godfather" of Mr. Rouhani..

The mixture of your mentioned nacissism and shizophrenia as well as double standards are apparently foundation of the land, where your "assembly" use to reside..

Make I kindly borrow some of your Haldol?

When other western "leaders" end their terms, they indulge themselves in their selfishnesses, and create "libraries" of their false "legacies" for brainwashed constituencies.

Mr.Ahmadinejad has chosen to serve his nation instead, in a much superior and not comparable way, than those western clowns.

His visions, if not disturbed or sabotaged, can and would bring new technological epics to the honorable nation of Iran.
He has more energy to create and contribute for the development of the country in the coming future and he has a chance for the political comeback.

I wouldnt automatically assume that,fame and notoriety cuts both ways,in addition Ahmadinejad would have a lot of powerful political and economic contacts/connections as a result of his time in office,these things would likely be incentives to a lot of people,so I dont think he would have too many problems attracting teachers and students to his college.Time will tell but dismissing the idea because its Ahmadinejad is silly its the sort of small minded and petty attitude one would expect from western politicians and its media

The term ' University of Iranians ' perhaps, will be specially, specifically and tecnically designed, built and finally established in the name of iranians only. The possibilities is; will there be no any non-iranian staff of trainers or trainee in the above mentioned university?

WELL said!-it is a noble course and our prayers are with Him,

I agree,good luck to him and his school