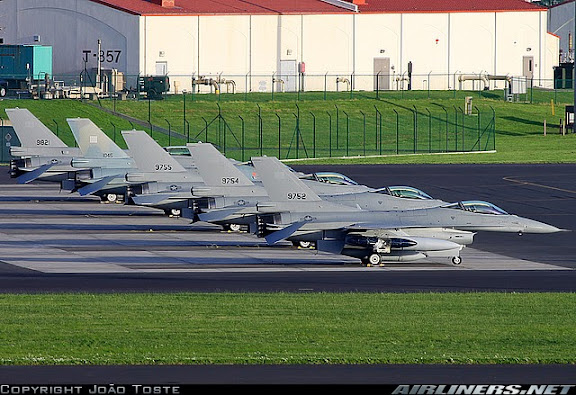 Above: Four F-16C deliveries seen last April on their way to Egypt (the fifth going to Greece)


President Obama, in his first punitive response to the ouster of Mohamed Morsi as president of Egypt, has halted the delivery of four F-16 fighter planes to the Egyptian Air Force.

The warplanes are part of a deal the United States and Egypt reached in 2009 for the delivery of 20 F-16 C/D fighters during 2013. The first batch of aircraft was delivered in January, with more scheduled for this summer and another delivery late this year.

The decision was described by some Pentagon officials as carefully calibrated to signal American displeasure but not go so far as to rupture the relationship or put Egypt’s security at risk.

These are F-16C/Ds Block 52 aircraft downgraded in relation to Israel's F-16s, such as being armed with AIM-7P Sparrow systems as opposed to more current active-homing AIM-120 AMRAAMs.

This is not the first time F-16 deliveries have been adversely affected by political developments. Iran's large order of F-16s was cancelled following the Iranian revolution, and more recently Venezuelan F-16 aircraft have been rendered with servicing difficulties due to a U.S. arms embargo on the country. (There have even been rumors Iran's IAIO has made attempts of assistance, having considerable experience in servicing U.S. military aircraft without American manufacturer support.)

Iraq is anxiously awaiting delivery of their F-16 F-16C/D Block 52 aircraft. The 1st delivery of 2 planes is scheduled for September 2014, with at least 2 arriving every month thereafter. The expectation is for all 36 ordered fighters to arrive by the end of 2015. However, like Egypt's F-16s, the Iraqi F-16's are also downgraded in relation to those delivered to Israel's air force. Within the past week, Iraq stated it had no way of interdicting arms being ferried to Syria over its airspace, which could be seen as a big hint it hopes for the F-16 deal to actually materialize and also perhaps to enable political cover in Washington for deliveries to become a reality.

File photo: Joad Toste at Airliner.net
Posted by Mark Pyruz at 3:04 AM

THE Americas don't fear a people! they fear their potential!! and IRAN is a perfect example.

US/Zionists are confused and hypocritical as always and hedging their bets at the final outcome in the Egyptian unrest heading towards a full blown civil war and terrorism. In any case, these weapons the $30 billion others since 1980 that bought the corrupt Egyptian generals will eventually end up in anti-US/Zionist hands anyway just like Iran in 1979. Egyptian military will implode eventually as the Fellahin conscripts and Junior officers are already very upset at the coup. Egypt is in for a massive upheaval and the US and its Zionist mutt will be the ULTIMATE LOSERS as always.

Are these made in Texas or Turkey this time around?

These could have been Iranian F-16s...! Little did the Zombies that crawled out of the sewage called Qom, know what they missed out on.

AnonymousJuly 25, 2013 at 8:06 PM
Yeah,they could`ve been another "arab" puppet state,I`m sure they`re kicking themselves for missing out on that,altho` if being an american arab puppet state is so great how come so many arabs are trying to get rid of the puppets and the american influence in their nations?

Your comment is spot on. There is so much hatred for the US in the region, particularly the US and its Zionist masters that average Egyptian would be happy to sever all ties with both. Just watching the mass turnout in Cairo and other cities with people holding millions of anti US/Zionist placards confirms that Egypt is drifting towards an Iranian style nationalist future. At the huge pro-military rally held in Cairo Friday, July 26, demonstrators shouted slogans against Barack Obama and calls to revive Nasser’s 1960s bond with Russia. “Bye Bye America!” took the place of chants against the Muslim Brotherhood, as huge placards waved over their heads depicting a threesome: Gen. El-Sisi, Vladimir Putin and Gemal Abdel Nasser, who ruled Egypt in the 60s in close alliance with the Soviet Union. Egyptians are yearning for a pan-Arab democratic future and ridding themselves of US/Zionist yoke.

Reports in Facebook spoke of Moscow’s offer to send Egypt replacements for the US F-16 fighter-bombers Obama stopped this week. Russia has expressed interest in selling modern weapons to Egypt and reviving economic aid. Russia under Putin is following the same vigorous foreign policy that USSR had vis a vis the Arab world. The only difference is that today Russia is on the right side of history by supporting the Arab people while the US is on losing side by supporting corrupt non-democratic puppet pimps and repressive militaries from UAE, Bahrain, Qatar, Kuwait, Oman and above all the arch-pimpdom of Saudis. US is in for severe problems and blowback from Syria to Egypt. Russia and Iran are on a winner.