Netanyahu to Push U.S. for ‘Credible Military Option’ on Iran 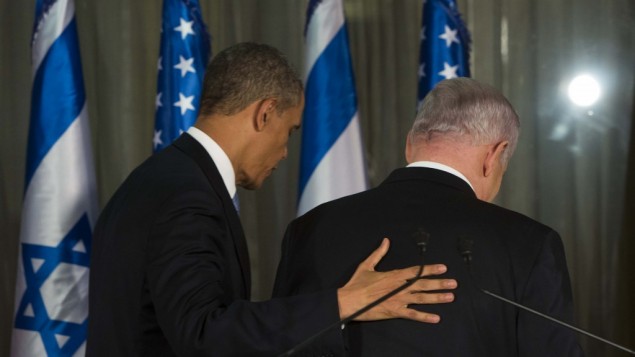 As the swearing-in ceremonies of Iran’s President-elect Hassan Rouhani nears, and with it a hope for an agreement between the U.S. and the new president increases, Israeli Prime Minister Benjamin Netanyahu is reportedly to launch “a new, last-ditch effort in the next few days to persuade the U.S. to revive the military option against Iran,” The Times of Israel reported today.

Quoting a report by Israeli Channel 2 TV, the Times also says that Netanyahu will have to decide whether to attack Iran by winter, at the latest, if new “public diplomacy” effort with the incoming new Iranian president fails. The assessment in Israel is that the window for military intervention will close next winter.

Next week, the P5+1 are set to meet to coordinate positions ahead of talks with Rouhani’s administration. Channel 2 points to a concern in Israel that Iran will prove capable of buying more time in such talks, while its nuclear program moves forward in full speed, making an effective military intervention too late.

The report stressed considerable support for a resort to military force by next winter within the Israeli cabinet, and concludes: “This could happen.” (The Times of Israel, 13 July)

I hope they really attack. This give us the needed reason to withdraw from NPT and make ourselves free of those stupid obligations.

I thought you didn't want to make the bomb, no?

why you thought I didn't want? I assume you are thinking that I am interested in IR or stupid Khameni but you make a mistake here. I am a 100% secular and support Iran's right for a nuclear arsenal like France and US.

What does the bomb have anything to do with secularism? I thought going nuclear is a political decision and why do you need to frame it ideologically? Fine, we now know you like Iran makes the bomb. Noted.

There is nothing surprising in such a move. Bibi has been renowned for not being interested in drawing down tension with Iran or with its regional neighbors in general, resorting to threats in the case of Iran and actual aggression when it comes to weaker enemies such as Syria or Lebanon, not to mention Gaza over the years. He is the exact equivalent of hard-line elements in Tehran such as Ahmadinejad and his clique, waving the never-fading external threat and burning as many billions from the state budget (and in Israel's case, the American budget and american tax-payer's money, obviously) and diverting people's attention from internal issues, notwithstanding how pressing they are for the average citizen. If all this nice posturing we've been witnessing between Rouhani and western power is more than mere self-congratulatory show for masses hungry for good news, we can expect a hardening of Bibi's stance on every of his Washington visits, and even anticipate the grave, catastrophic threat of seeing him finally go it alone and literally make the ME explode in every direction. I prey to God it never comes to that and that American finally gets a hold of this mad dog through a (very) tight leech it has visibly lost track of in recent times.

Israel can not do in alone and they know it. They have been saying that Iran will have the bomb in the next 6 months since 2005 (at least)
The first 6 months of Rohani's presidency will be a very crucial period for Iranian- 5+1 negotiations and how things unfold.

Nutty nutanyahu trying to push America into a new war of aggression. The whole world can see clearly who is the real threat to the middle east and the world. The zionist entity.

Poor Obama is at his wits end with this confidence trickster called Nuclearyahoo infamous for his everlasting bamboozling and tall tale predictions.

It is yet the same old story again from years of empty military rethoric against the great nation of IRAN coming from the world's most cowardly Prime Minister of a very tiny little state of the Zionist Regime of Israel(everytime when it comes to dealing with IRAN). Indeed, it is all not about IRAN's peaceful nuclear energy program but instead, IRAN's fast growing military power and as a new superpower in the whole region of the Middle East as which has been analysed, described, stated and written by the famous U.S. CIA Middle East Specialist Agent, Robert Baer, in his book a couple of years ago. Looking at the current situation of IRAN's military, the threats are becoming slower, weaker, softer, sadder, more humble and the most of all, funnier. Actually it has been the true color of Israel.

Just an empty barking as always. Isreal has bombed Syria more than four times in the last six without prior warning, likewise has it attacked Palestine. Why does it has to make so much just to attack Iran; just because it is mission impossible.

Who let this Zionist dog out? wuf, wuf!

Never underestimate the vicious stupidity of the zionists or their utter contempt for international law and its norms.Ian should make it very clear that any act of aggression would see iran withdraw from the npt

I Loved the reaction Rohani had upon hearing what Netanjahoo had said about him regarding wolf in sheep......

Rohani said I don't know a man by this name amongst the heads of states. Implying about Israel being an entity and not a state.

(you can imagine the laughter it generated in the hall)