The Challenge of Inflation 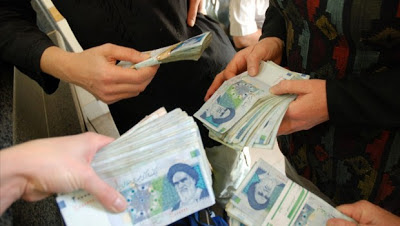 
The CBI figures are normally lower than unofficial inflation reports, but still point to a growing inflation that might be getting out of control. CBI also devaluated the rial by more than half this week, a move that will have inflationary pressure on prices beyond the figures released.

President-elect Hassan Rouhani is inheriting a very sick economy and would need all the right decisions and a bit of luck to reverse the current trends.

Iran's inflation and economic problems are related to the nature of the regime.It won't make any difference if you have a grey donkey or a black donkey because no matter what a donkey is a donkey and khomeini said that economy is for donkeys.Little did anyone know that he literally meant it when he handed the country over to his donkeys.

You are right on the money.

People that are in love with the Khomayni legacy would have you believe that 34 years of isolation and reverse progression is meant to be viewed with success. Indeed, the Khomayni legacy can be touted as the foremost example of inflammatory attitude towards other nation states as well as the movement that has been the most dangerous in the MiddleEast since takin over the country in 1979.

It would be great if we had a source to verify these numbers - the EA WorldView post is without a linked source. Not saying they're necessarily wrong with this but in the past they've been demonstrated wrong many times; a result of heavily biased reporting.

If these figures are accurately portrayed by EA Worldview, we still need to compare them with figures provided by the Statistical Center (SCI). There also needs to be a reckoning of CPI, with time and regional variations taken into consideration. So no, it's not as easy as pointing to a single figure.

As the economic situation remains challenging for Iran, it is not as bad as Iraq in say 2002 or Britain in 1940. It's not even as bad as Egypt in 2013 and Egypt isn't even on the receiving end of an economic war; quite the opposite, they're getting billions of dollars in handouts from U.S. aid.

Most of these figures by US/Zionist institutions are baloney. Inflation by world standards is relatively high but Iranians have access to all goods and foodstuffs, the economy is booming and the malls and shops are full. It is still better than the deadbeat US where now over 100 million are on foodstamps or the bankrupt EU with millions on unemployed.

Now that the enemies of Iran can't fault its democracy they post crappola about the economy. Actually, with both the currency and stock market strengthening, oil prices going up due to Arab implosion, Iranian economy and inflation will stabilize. Iran is also looking at strengthening trade with various Euro nations like Germany and France. Even the eastern Europeans are interested in better trade ties. Iran is a rich nation and a large lucrative market and its economy will only rise.


Despite all the claptrap the cappuccino drinking and West residing apologists and their cyber thugs try to portray their pay masters shenanigans as "progress" and "independents",the reality is the opposite of the spectrum, because Iran has become more dependent upon a country like China for its oil exports.China knows that the Khomeinist regime is in a weak economic state and under sanctions therefore the Chinese take advantage of the situation and offers Iran far less value for its oil below market prices and as barter.This alone prevents Iran's "independents" because of the cash poor return to its economy and freedom of choice in dealing in an open market economy. Until Iran learns that the Khomeinist occupying charlatans are the main reason why the country is in such a poor state and in need of being evicted out of power in its entirety,the country will remain the same and in poverty for a long time to come.

Pyruz,you bore us to no end with your comparisons of Iran with war time Britain of the 1940s.Khamenei is no Winston Churchill and the regime is more comparable to the Huns and the sack of Rome. Get real man!

I bet if the figures were favourable towards the regime you would consider it as true,right? Only thing that is "full" is the excremental garbage you come out with.

No kidding Sherlock! Your ilk sitting in chai khanehs have been predicting doom and gloom for Iran since 4 long decades and by now you are probably on a made in China mobility scooter from Walmart and wearing Indian made dentures (cheaper labor and outsourcing and all) but still rattling off rants extraordinaire! Que pasa amigo? things ain't lookin too rosy on the Zionist front either...eh with Snowden spilling the beans...

More excremental garbage spewing out.When will you saps ever learn that no one believes in your distorted rhetorical nonsense.

Are you calling the Central Bank of Iran (CBI), the source of this news, a “US/Zionist” institution? I have heard many criticism against the CBI, being an agent of the U.S. and Israel is new!

We need to be extra careful with accusations of unprofessionalism and false reporting against a very active news blog, with dedicated staff writers. What they have reported here are the inflation numbers that were released by the Central Bank of Iran, the government’s official source of reporting the rate of inflation. If numbers are wrong, then it is CBI’s fault. But I don’t have any indications that CBI is overstating the inflation numbers. If anything, they usually have a tendency to understate the figures!

http://www.youtube.com/watch?v=dmakAGLCE5c --- Iranian presidential election: Implications for Iran, the region, and the world.