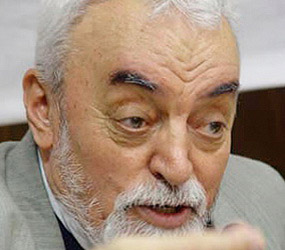 Habibollah Asgaroladi, Iran’s veteran politician and the dean of the Bazaar, has raised hopes this week that Mousavi and Karubi could be freed on Eid-e-Fetr. The Eid marks the end of Ramadan, a month of fasting and prayer, and is expected to fall on 7 August.

Asgaroladi made the remarks during the Iftar on Thursday evening at the Islamic Association of Engineers at Imam Sadeq University. He also said that the two political parties, Mosharekat, and Mujahedeen Enghelab Islami, which were created in the first days of the Islamic revolution but has since been declared illegal, as well as Etemad-e Melli, a newer group, should have the freedom to restart their political activities.

“During a time that (President-elect) Rouhani has unfastened an umbrella under which all Iranian people can gather, why couldn’t different political views (groups) also be among the participants?” said Asgharoldi in response to a reporter’s question whether those parties could restart their activities. (Etemad, 20 July)

Asgharoladi’s remarks are the firmest indications yet that Rouhani’s victory could result in political openness in the country not seen in the past eight years under the hardliners.

Let's be clear: this proposed "political openness" extends only to Khomeinist Islamists (i.e. followers of "Khatt-e Emam"). It would be the approximate equivalent of the former USSR "opening" its system to different strands of Marxism-Leninism. All non-Khomeinist organized political groupings have been violently suppressed by the Islamist regime.

Let’s hope this openness is as good as Gorbachev’s glasnost. It would be a great step forward for Iran.

I agree with Anon 12:19.But as you know Gorbachov's glasnot was a failure and lead to the collapse of the Soviet Union.Once a dictatorship tries to reform the system it opens a Pandora's box of unmanageable problems.The problems for Iran's economy is the ideology of the regime itself.

And the collapse of the Soviet Union also meant the rebirth of Russia. Political openness might not be as good for the regimes, but the nations need to pass through that phase of political development.

The sooner the better.

This reminds me of the sort of "all things to all people" mentality that was seen in the aftermath of obamas election,the belief that he would fix all these problems,right all these wrongs,it was utterly unrealistic and it certainly was not going to bring about the end of the american political structure anymore than the election of rouhani is going to bring about the end of the iri as some of the commenters here seem to so desperately and like some of the people who voted for obama,rather unrealistically,hope

Rohani to have a US educated cabinet

Several U.S.-educated Iranians are expected to be tapped for key posts in President Hassan Rowhani's new administration, hinting at a break from the antagonistic rhetoric of predecessor Mahmoud Ahmadinejad.

The 64-year-old moderate cleric won an outright victory in June’s election, in which he was the closest thing to a reform candidate running to replace Ahmadinejad.

A sudden thaw in relations with the West is unlikely, most experts agree. But Rowhani's installation could mark the beginning of a more open government and lead to friendlier relations between Washington and Tehran.

“I would not expect a change of agenda, but maybe a change in the way things are done – and that is important when it comes to diplomacy,” said Sasan Aghlani, an expert on Iran at British think tank Chatham House.

After Rowhani is sworn in on August 3rd, he will unveil a new cabinet and team of advisers. Among the names being touted are four veteran Iranian politicians who all hold degrees from U.S. universities.

Vaezi graduated with a degree in electrical engineering at California’s Sacramento State University in 1976, and his biography lists two other U.S. degrees and a doctorate from Warsaw University in Poland.

Dear Mr Uskowi, Gorbachev was the leading figure in the Soviet system. For the USSR analogy to apply to the Khomeinist regime, the position of Supreme Leader-for-Life would have to be held by a Gorbachev-like figure. The chance of that happening anytime soon is slim to none. However, I do remember all the excitement and hopes back in 1997 that Khatami would be the IRI's Gorbachev. For a nation with such a long history, we Iranians sure do have short memories.

Asgaroladi is a crypto Jew. As everyone knows the crypto jews close to Bazaar financed the revolution which toppled the Shah of Iran and increased their total control of the country. His brother, Habibollah Asgaroladi, worth almost 10 billion USD is chairing several influenctial Iranian trade organizations and for a while he worked at the ministry of commerce.
Given the fact that Saeed Emami aka Saeed Eslami aka Saeed Ghavami, another Jew, was the deputy minister of intelligence who later on was killed in the prison in a strange way accused for chain murders in late 90's, one can conclude that certain secret organizations in Iran close to the Jewish community are controlling some very vital areas of Iranian economy and politics.
At the same time many Iranian Jews in exile are heavily involved in indirect trade with Iran making huge amount of money by utilizing the current situation with the imposed sanctions on Iran.