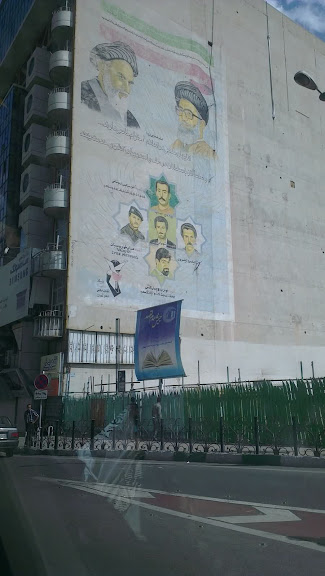 Street mural in Tehran in memoriam of fallen Iranian Jews and Christians of the Iran-Iraq War (click photo to enlarge).
Posted by Mark Pyruz at 4:09 AM

Great photo. Iranian nationalism transcends religious dimensions. This was a just war for Iran's survival and its sons and daughters regardless of confession or beliefs answered the call in millions. RIP to all their noble souls. IRAN PAYENDEBAD.

Mr "IRAN PAYENDEBAD",were you there like some of us who lost our brothers fighting against Saddam's army while unkowingly the regime was stabbing us in the back or are you living comfortably in the West and just like to say "IRAN PAYENDEBAD" while doing mozdori for such an anti Iranian entity? Do you REALLY know what "IRAN PAYENDEBAD" means at all?

Yes, you were indeed sitting in Los Angeles like most of your runaway buddies.

You didn't answer my question Mr "IRAN PAYENDEBAD".Were you there with us when we were receiving shit from both ends of the spectrum while the mullahs and their lackeys were enriching themselves at our expense or not?

This is good. Iran has no problems with jews, despite the raving propaganda of American joke media and its zionist masters. zionists must be fuming with anger because this was posted. Good job.

Most of the regimes Aghazadehs and their buddies are lording it with Iran's stolen money in Los Angeles and Orange County USA.Meanwhile the Iranian people are struggling to buy bread to put on the table.

Not just is an unofficial wall mural, but a proper landmark memorial to honour the contribution and sacrifices made by Iranians of Christian, Jewish, Zoristarian and Bahaii faiths to defend the country is long overdue. Let’s also not forget the sacrifices made by probably the largest minority of all, i.e. those who didn’t subscribe to any religion or to the existence of God.

Iran has enormous problems with Jews and with every other form of religious belief that differs from the crap taught by Khomeini.

Anon 10:17 PM, your hasbara propaganda is proven wrong. Iran has a problem with zionists, not jews.

7:13--- gosh, but you're a teller of untruth..... when the vile Mr Khomeini assumed power, the majority of the Iranian Jews left the country....precisely because of the vile nature of the man and his loathsome backwardness.

He's the benighted man who declared that it was fit and proper to murder authors of books.

Iran has always been a multi-cultural mosaic since the days of the global Persian Empire. Iran's stock in the world is rising and it is once again slowly opening up to its neighbors as its democracy and security increase


Fourteen thousand students are studying at Iran's universities and efforts are underway to attract more international students, according to Iran's minister of science, research, and technology, Kamran Daneshjoo.

According to Hossein Seyyed-Mousavi, a deputy president of Ferdowsi University of Mashhad, most of the foreign students studying in Iran are from Afghanistan, Syria, Iraq, Pakistan, and Turkey.

A report published by the UNESCO Institute of Statistics (UIS) in 2012 said that at least 3.6 million students in 2010 were enrolled in tertiary education abroad, up from 2 million in 2000.

Ha ha, zionists are indeed getting angry with this article. They are posting their hasbara propaganda at 10:17 PM and 4:01 PM .

Anon 10:17 PM.....I agree with you but with a slight difference.This regime is not Iran but anti Iran Khomeinist regime.Khomeini once said "Let Iran burn for Islam".There lies the foundations of the anti Iranian regime.

http://en.merc.ir/default.aspx?tabid=98&ArticleId=272 --- Viewpoints of the Iranian political and military elites towards the Iran-Iraq war.

The Iranian Jews , who haven't left for the Western stupidity and money, are enjoing a freedom to worship Judaism (without Mossad's and other western agents), and are represented by the 2 of their representatives in the Iranian Majlis, despite that their population in Islamic Republic is a small one.

Many so selfcalled "jews", around the world, decided to emigrate to the other lands, than to the land specified by their "history" books..

Apparently most of those emmigrants, who "complained" about religious "freedom" in countries of their birth, have decided to see money as a their new god, in "new" lands ...

Anon 7:50 Iran is run by a fascist Islamic dictatorship.And they pay their minions to spread nonsense propaganda.

Anon 3:35 PM, they are in good company with the fascist zionist dictatorship.

6:37------ I would hope that we all understand that the crap shoveled by Khomeini and the present pygmies is not at all representative of the Iranian people.

Neither is the crap shoveled by nutty nutanyahoo and the zionists at all representative of all Jewish people.

Anon 9:26 --- that is also true. Netanyahu and his buddies are pretty lousy.

not as utterly loathsome as Khomeini (pox be upon him) but pretty lousy.

Even more so than Khomeini. At least Iran did not conduct decades long occupations, settler colonialism, apartheid, collective punishment or use chemical and experimental weapons on civilians.