Russia, China side with Iran at UN on recent Iranian missile testing 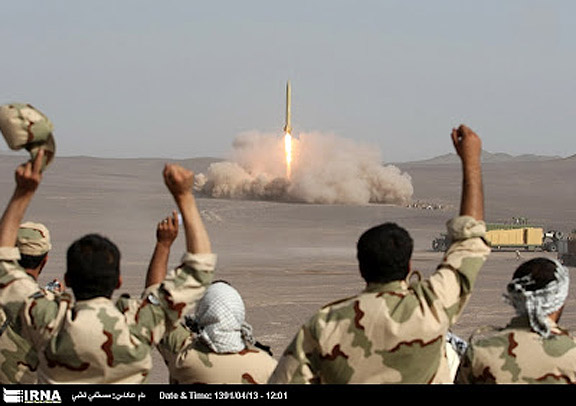 That division effectively rules out any expansion of sanctions against Tehran over the tests for the time being, U.N. envoys said on condition of anonymity.
Diplomats said it was Russia, backed by China, that refused to declare Tehran's missile launches a violation of the U.N. restrictions, as a U.N. Panel of Experts on Iran said was the case.

As long as the sanctions committee remains divided, it will be difficult for the Security Council to add names of any Iranian individuals or entities linked to the missile tests, Security Council diplomats said on condition of anonymity.

The tests involved the launch of Iranian Shahab missiles in July 2012 during the "Great Prophet 7" military exercises.

"These included launches of the Shahab 1 and 3, Zelzal, Fateh-110 and Tondar missiles, as well as an anti-ship ballistic missile, the Khalij Fars," the Iran Panel of Experts said in its May report to the Iran sanctions committee.

A Russian delegate explained Moscow's position to the Security Council, saying "hasty conclusions not based on facts must be avoided."

A Chinese delegate reiterated Beijing's stance: "We are not in favor of increased new pressure or new sanctions against Iran."

The Russians and Chinese feel they were previously misled when voting for a new fly zone over Libya on the basis of protecting civilians, but instead in their view the NFZ's actual purpose was to impose regime change by armed force on the country. Since then, they have blocked any repeat type of measure on Syria and Iran.

Furthermore, the Russians and Chinese have repeatedly voiced their objections to unilateral sanctions against Iran outside the authority of the United Nations. As such, this sort of rejection shouldn't be considered a surprise.

For their part, the Iranians consider these missile tests defensive in nature, in support of their defense doctrine based on deterrence.

the noose continues to tighten ...very slowly...but the circulation of the Iranian economy has already been restricted to the point where growth is no longer possible and prices rapidly rise.

The wests desire Iran to be weak, but it disturbed and confused them seeing the exact opposite. Russia has come to her senses by realising that it will be protecting itself by protecting its allied neighbour. The wests are not interested in resolving issues with Iran but distabilising it, they were seriously diappointed by the outcome of Iran election, they had desired a repeat of 2009 chaos. Thank God for the wisdom of the Leader, Iran will come out stronger and better.

Considering the US/Zionist and Wahabbi takfiri triad of sheer cannibalistic terror, everyone should support Iran. The Chinese, Indians and Russians should be thankful that a powerful Iran on their flanks is impeding massive Wahabbi terror in their own countries. Specially, for a Russia already under Wahabbi threat in the Caucasus. Putin is kissing "western" arse to no avail as Russia's energy and natural resources are too tempting a target for the US/Zionist global plunder Inc. with a franchise in takfiri cannibalism.

Of course Russia and China would side with Iran.After all China owes Iran over fourty billion dollars in oil revenues in which the Chinese would decide what sort of junk they would give to Iran instead of hard currency.As for Russia,we know why they support the IRI because of their arms sales to Syria and the IRI neglect of the Caspian sea.In which IRI gave away our fifty per cent share and reduced it to thirteen per cent.Russia and China are in it to win it for themseleves and the regime in Tehran is very willing to sell Iran at bargain basement prices.

AnonymousJuly 16, 2013 at 9:09 AM
Iran has given up nothing in the caspian,no agreement has been reached on any new divisions,as for chinas payment problems your good friends in the west are to blame for that,but since china is the manufacturing capital of the world these days I dont think iran is missing out on much it just gets its payments in goods and yuan

Anon 3:31 PM....The payment problems just like the other things that has destroyed Iran is due to the Islamic regime and no one else.China owes over $40 billion to Iran in oil sales.Lot of manufacturing is leaving China because as their living standards go up so do wages.That honeymoon with China and the West will come to an end.Hala boro cherteto yekja digeh begoo.

No its due to WESTERN sanctions,and its nothing like 40 billion.I think you need to get your facts straight

Stop living in your bubble.China owes Iran $40 billion.And why is there "WESTERN sanctions"?

Because of IRI self inflicted destructive policies.

No wonder you flunked junior high! China does not owe Iran $40 Billion. China is slowing down and manufacturing is indeed going to the lowest common denominator in Asia and Africa. However, Iran-China trade in total is barely $37 billion and slowing as there have been complaints about dumping and shoddy Chinese goods in the bazaars.

Trade between Iran and China dropped by 18 percent in 2012 to $37 billion after a raft of banking sanctions imposed on the Islamic republic, Iranian newspaper Donya-e Eqtesad reported on Monday.

"Iran-China trade fell to $37 billion in 2012 from $45 billion in 2011," the newspaper quoted Assadollah Asgaroladi, director of the Sino-Iranian Chamber of Commerce, as saying.

Even as America and other Western governments have tightened economic sanctions against Iran with the aim of forcing it to curb its nuclear ambitions, China has continued to strengthen its links with the Islamic Republic. Iran’s oil, which generates around 80% of government revenues, is increasingly flowing towards refineries in China, which is now its biggest trading partner.

Iran has also become a lucrative market for Chinese products and services. China is investing $1 billion to improve Tehran’s infrastructure. A Chinese conglomerate has already expanded the sprawling capital’s underground railway, under a contract worth $328m.

Most Iranians, however, bear no special love for either China or the Chinese. Many think China is just another country seeking to exploit their country’s weakness and pressure from the west. There is a wide sentiment in Iran that it can’t rely on the Chinese, as it has colluded with western sanctions regime at the UNSC. In general, China is not very popular in Asia either as the perception is that the Chinese are money hungry, unprincipled, crude and care only about themselves. The quality of their goods is often poor. After several cargoes arrived with “fraudulent” chemicals inside, the Iranians had to to pay for quality tests in China, adding weeks to the delivery time and costs. “The Mongols are invading again,” is the feeling in Iran and Asia in general.

Iran is diversifying its trade and the total outstanding trade imbalance with China after oil payments is about $1.3 billion and Iran will accept yuan. GET YOUR FACTS RIGHT! This type of uneducated exaggeration is beyond stupid.

Stop watching so much LA Iranian TV programs. You sound ignorant and your comments are ludicrous.

You are right, but such idiotic propaganda is their own worst enemy. They should at least take the time to study some facts, rather than making absolute fools of themselves. Malcontent is one thing, being a certified IDIOT is another.

Not as ignorant and ludicrous as your childish comments.Now go back under that stone and be quiet.

Well I'm sure someone like yourself knows about being a "certified idiot",right?
Your pathetic comments leaves no doubt that the real "Malcontent"could only be you on this blog.