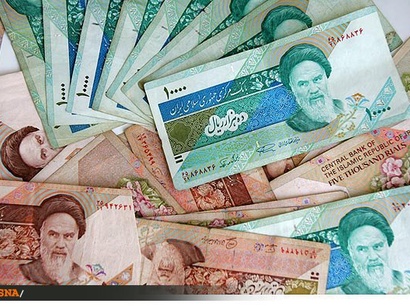 According to Money News:


The central bank on Saturday was selling one US dollar for 24,779 rials at the subsidised rate available only to select importers to procure basic commodities and medicine, according to the bank's website at http://cbi.ir.

By increasing the so-called reference rate, the central bank scrapped its rate used at an "exchange center" that put goods importers in contact with exporters to exchange funds at a rate of around 25,000 to the dollar.

It appears the multiple exchange rate system put in place by Iran has been simplified from three to two, with the official rate now much closer to the parallel market rate. Interesting that this move is being implemented before the formal onset of Rouhani's presidency.
Posted by Mark Pyruz at 4:10 AM

Ahmadinejad’s government, in the last weeks of the presidency, has practically devaluated the rial by 100%. The question asked was why? The justification given is to bring the “official” rate closer to the reality of open market rate that is now at around 32,000 rials a dollar. On the face of it, this is a smart and logical move. Rial needed to be devaluated to a managed rate close to the open market’s. So the move in itself is a correct one. But there is also a more sinister reason for Ahmadinejad to devaluate the currency weeks before leaving office:

Ahmadinejad’s administration had used borrowed petro dollars from the treasury, and lots of it during his presidency with oil at more than $100 per barrel, to sell at open markets as high as 38,000-40,000 rials for a dollar. In turn, the government used the rials to finance its programs, especially its monthly cash payouts to the citizens as part of its subsidy reform program at costs of billions of dollars a month. Now weeks before leaving office, the administration needs to pay back those dollars. And what an easier way than doubling the official rate overnight, in effect cutting its dollar-denominated loans by half!

This is a classic case of how governments (and major importers/exporters) can and have manipulated the multi-tiered rates of currency to finance their programs (or enrich themselves) only by playing with artificially set rates (Buying in lower rates and selling in higher ones, without producing anything in between.) That’s why it is incumbent for President-elect Rouhani to establish a single currency rate (for example, a managed open rate, as in China, where the government sets the low and high limits for the currency against the dollar, and let it float within that range in the market). The move is necessary to stop fraud and bring normalcy back to the currency market.

one of the most outstanding expert advice on your part!.THIS IS WHAT IS EXPECTED FROM A PERSON OF YOUR STANDING not those politically tinged rhetoric essays you have been laboring to convince your readers!.
this Nation needs everybody among its sons and daughters and at peace are those who live to accept the present political setup as a point in the history of the Nation.
thank you once more FOR SHOWING HONESTY and may the ALMIGHTY HAVE MERCY TO US ALL!.