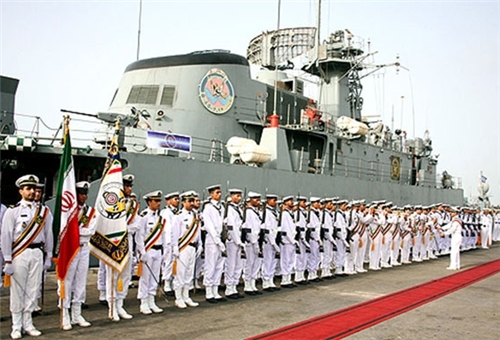 Iran’s maritime forces, including the Islamic Republic of Iran Navy (IRIN), the Islamic Revolutionary Guards Corps Navy (IRGCN), as well as its commercial shipping fleet its flagship, the Islamic Republic of Iran Shipping Lines (IRISL), have been expanded and developed rapidly during past years, semi-official Fars News Agency said, attributing its report to recent findings by the Institute for the Study of War, a U.S. think tank. (Fars News Agency, 6 July)
“Iran is expanding its naval activities to further reach its strategic goals and gain more defensive power and influence in the region,” the report said.
Iran launched its arms development program during the 1980-88 Iran-Iraq War to compensate for a U.S. weapons embargo. Since 1992, Iran has produced its own tanks, armored personnel carriers, missiles and fighter planes.
Iran's naval power has even been particularly acknowledged by friends and enemies, Fars said.

“Iran's Navy has been transformed into a highly motivated, well-equipped, and well-financed force and is effectively in control of the world's oil lifeline, the Strait of Hormuz.” (Fars News Agency, 6 July)
Photo: Fars News Agency
Posted by Nader Uskowi at 10:03 AM

For those interested in reading the Institute for the Study of War report "Iranian Naval and Maritime Strategy" by Christopher Harmer click HERE.

I just read the I.S.W. report paper on The IRIN and it was a remarkably unprecedented amount of information, about the emerging Global Power of the IRI. I can see why North America, fears IRAN because the IRI will soon be the master of the entire Western Hemisphere, god willing! The Iranians are Super Muslims! And the Anglo/Euro/Zionazi's are afraid of this fact.

I have also read that report, and published this post. But you better clam down; they are not saying Iran will soon become the master of the universe, God willing or not!

Anon 4:39....When will you become ten years old so I can said you a new box of toy soldiers for your birthday?

Anon 4:39 thank you for the amusing parody.

Do you know what happened the last time iran's Navy looked the wrong way at the u.s. navy? It was an utter massacre with every iranian ship that moved being sunk. And that was the u.s. navy of 25 years ago taking on the same ships in iran's many today.

Rather than lying, which is apparently the cultural trademark of iranians, you should try to embrace reality no matter how humiliating and it may be.

Iran has indeed achieved remarkable domestically manufactured military capabilities since the revolution and the adults here have been posting factual information for a while and this report amongst many others states the obvious. Iran learnt a lot of hard lessons during the jange tahmili and started on a total khod kafei (self-sufficiency) drive in just about every field. This was further accelerated due to the US/Zionist sanctions. Iran played the sanctions busting game very strategically, by focusing on mass education, expansion of tertiary education , enhancing domestic R&D, reverse engineering and in some cases import substitution. It also mastered dual use technology application and diversifying its economy.

It was never in doubt, that when Iranians put their heads together they always innovate and come up with solutions. The military-industrial infrastructure that Iran has built over three decades is world class and some the modern weaponry has not even ben revealed like the full extent of its diverse nuclear program. One has to keep in mind that Iran is huge nation with immense resources and a human talent pool to match. With Iranophobia and Islamophobia in the "west", Iran has benefited a great deal by high calibre reverse migration of professionals. Many of the scientists and engineers working in Iran had been trained and worked in the west and are now proudly serving the motherland in various capacities. There is also immense input from the Iranian diaspora of over 3 million people, most of them highly trained professions with skills.

Iran in the near future will be able to further develop its military and manufacturing capabilities and the naval developments are a glimpse of the future. Now with a more open and free social environment and political stability, Iran's development will only accelerate. Iran has saved over $52 billion in its future fund. This is a commendable achievement, considering the US/Zionist economic pressure and is in stark contrast to the deadbeat bankrupt US snooping police state and imploding EU.

http://www.youtube.com/watch?v=5x2lGVasrPM --- Iran-Azerbaijan relations and strategic competition in the Caucasus.

What's wrong Uskowi? Are you scared of an emerging Islamic Super Power? you see Mr Uskowi, Zionist/Western hypocrisy and ideology is on the decline. And theirs Virtually, nothing the Zionist Pigs can do about it. Oh sure, their trying to bribe and intimidate the rest of the world, such as the Egyptian Army, The Saudi's and other Zionist Arab-Euro states, a percentage of the Sunni Muslims are corrupt and have struck a deal with the Anglo/Zionist devil Himself. That is why their defiled interpretation is not working! However a correct understanding of Gods way is being exemplified, by your people. God has once again chosen the Persian People to lead Humanity. Mr Uskowi, I like you. you are a phenomenal Journalist, and an exceptionally gifted Man and I believe that in due time you will accept this reality, God willing.

@10:03 AM,
The emergence of an Islamic superpower or not was not the subject of this post and my comments. The subject was the capacity of the Iranian navy at this time and my comments should have been read as a cautionary note not to become emotional in your analyses. Stay realistic, and your ideas will prevail if they are grounded on truth and realities of the times.

Praising ones self are we.

Anon 2:45 AM, that makes a difference from lying as a way of life, which is apparently the cultural trademark of zionists.