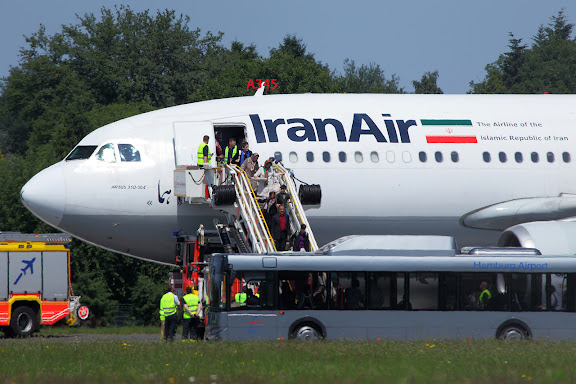 Reported by Simon Hradecky at The Aviation Herald:


An Iran Air Airbus A310-300, registration EP-IBK performing flight IR-723 from Tehran Imam Khomeini (Iran) to Hamburg (Germany), landed on Hamburg's shortened runway 23 at 11:44L (09:44Z) but overran the end and broke through a fence protecting a building site on the runway before coming to a stop. No injuries occurred, the aircraft remained without damage. The passengers disembarked onto the runway via mobile stairs, the aircraft was subsequently towed to the apron.

The incident aircraft was able to depart for the return flight IR-722 via Ljubljana (Slovenia) to Tehran about 5:45 hours after landing and is estimated to reach Tehran with a delay of 4:15 hours.

A German-based source claims there was no fence on the runway, with the crew managing to veer around some lighting equipment. A tailwind may have contributed to a late touchdown.

This IranAir flight appears to have refueled at Ljubljana Jože Pučnik Airport (LJU / LJLJ); a sanction-related refueling site for the airline. 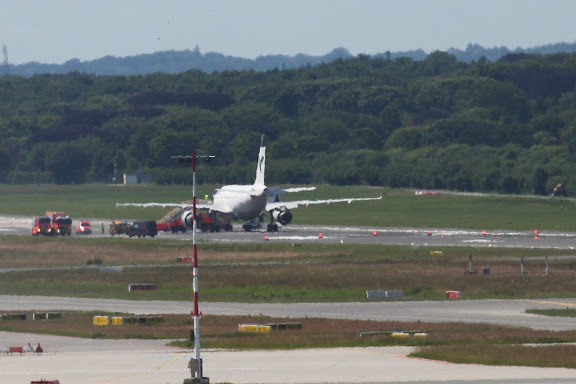 Luckily everything turned out fine as this was most probably an error in estimating the runway clearance. The Korean airliner made a fatal error in San Francisco, however, Iran Air pilot was able to make corrective measures.

MAY the Almighty guide us all and steer us away from calamities!

I have noticed again that some articles disappeared (are in hiding) from public viewing and they were related to the US independence day or those articles have been related to the events in Egypt...

Perhaps NSA/CIA scooped them and are now on Snowden's laptop on way to Venezuela, Nicaragua, Bolivia or Ecuador. You know the US police state is very sensitive about any criticism these days. LOL. even though most US "secrets" from PRISM to ECHELON are on the web now and have turned into a global joke.

I would also like to share some facts about my problems with the visitations of this blog.
It had happened, that whenever I tried to go back to my previous search engine from this website, something prevented me to move out from the Uskowi on Iran website and I had to close my session or move to an initial browser's page.
I had no problems to return back to my previous search engine from any other visited web pages, even those considered as "unfriendly" to the Western ideals and "values"..

This July I have had frequent messages "that a script has been running (installed) ....and that my computer might become unresponsive", after I tried to enter or type a webside address or words on my search engine....or after I had reached my entry....

I have the same problem with both Firefox and Explorer, I think with so much snooping these days, particularly sites with anything to do with Iran or Middle-East are fair game for all the stasi types and hasbara. I have the script running message various times and have to shut down the browser and start again. Well looks like these are joys of living in snooping world these days. The best is to keep at it as these police states will simply exhaust themselves sooner than later.

Thanks for your response and information that the problem affects people involved in similar activities..

Here is the full text of that message (You and I mentioned, in our comments):

"A script on this page is causing your web browser to run slowly, if it continues to run, your computer might become unresponsive".