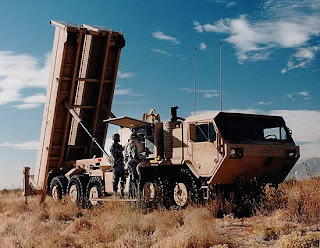 The U.S. has cleared the sale of up to $7.6 billion in missile-defense systems to Qatar and the UAE, Reuters reported today. The Persian Gulf countries had requested the purchase of Lockheed Martin’s Terminal High-Altitude Area Defense (THADD) systems. (Reuters, 6 November)

Under the agreement announced by the Pentagon on Monday, Qatar will receive two THAAD fire units, 12 launchers, 150 interceptors, parts, training and logistical support for an estimated cost of $6.5 billion. The UAE will receive 48 THAAD missiles, 9 launchers and other equipment valued at $1.135 billion in addition to an initial order for $1.96 billion of THAAD weapons systems signed in December.

THAAD is a U.S. Army system designed to shoot down short-, medium- and intermediate-range ballistic missiles with an interceptor that slams into its target. It can accept cues from Lockheed's Aegis weapons system, satellites and other external sensors, and works in tandem with the PATRIOT Advanced Capability-3 terminal air-defense missile. THAAD includes its own radar along with interceptors and communications and fire control units. (Reuters)

The sale will deepen Washington’s cooperation with Persian Gulf nations on missile defense and increase pressure on Iran.

@reader---- Iranian threat to US is overplayed.

Iranian threat to other Gulf states not so much overplayed. US will protect these folks, but they can afford to pay for the protection.

How is it that Iran is a threat to the Gulf states? Iran have never explicitly threathened the folks on the other side of the Persian Gulf. As a matter of fact, Iran doesn't even have the capability to project its armed forces beyond its own borders, neither on land nor on the sea. Iranian military doctrine has been angled towards the preservation of Iranian territory, and to reflect intruders. Infact, last time i checked it was they who made audacious claims on Iranian sovereign territory.

Half a billion per launcher? Man these government contracts are a goldmine, those lobbyists are really paying off for lockheed.

sucking petrodollar from the arabs to rescue american defense industry

It never explicitly threatened Lebanon, but simply subverted it.

Iran has proxies in Yemen and agents in Saudi Arabia....and there's some small talk that Iran is involved in the unrest in Bahrain.

Anyone who hasn't gotten the idea that Iran is, and has been, active in exporting the Khomeinist doctrine has not been paying much attention.

This is another scam to rip-off the Persian Gulf petro-pimpdoms with another bout of Iranophobia. The simple military fact is that most of these puny family run fiefdoms are within Iranian artillery (with base bleed propellents) and short range missile range anyway and no system in the world can "protect" them anyway. Just the usual US scam to fleece the ignorant Arabs. Iran poses no threat to any of these tiny pups.

Yeah,just like the scam when mullahs fleece the Iranian population out of their daily bread and sanity.

You're right Iran poses no threat against those "pimpdoms".
The Islamic regime only poses a threat against the nation of Iran itself.By stealing imprisoning torturing,rapping and murdering the Iranian citizenry.