Military Strike May Lead to Withdrawal from NPT - Iran Official 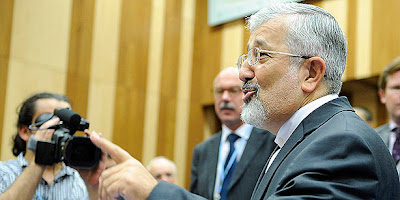 Iran’s Ambassador to IAEA Ali Asghar Soltanieh said in Vienna today that any attack on the country’s nuclear facilities may lead it to withdraw from the Non-Proliferation Treaty (NPT), a pact aimed at preventing the spread of nuclear arms.  (Reuters, 30 November)

If attacked, “there is a possibility that the (Iranian) parliament forces the government to stop the (U.N. nuclear) agency inspections or even in the worse scenario withdraw from the NPT,” Soltanieh said. Military strikes would not stop Iran from enriching uranium, he added.

“Iran is master of enrichment technology ... it can easily replace the damaged facilities,” Soltanieh said.
But, the Iranian ambassador said in a long statement in English to IAEA Board of Governors that Iran is “well prepared to find a negotiated face-saving solution and a breakthrough from the existing stalemate.” (Reuters)
Photo credit: Ali Ashgar Soltanieh, Iran's ambassador to the IAEA (EPA/Reuters, Roland Schlager)
Posted by Nader Uskowi at 9:07 AM

They've been confident all along. Sanctions as pretext/justification for weapons track of dual track strategy ? Tail wagging the dog ?

Who is in control here, Wash DC for Tehran ?

Once the Tiger is found to be only paper, and the Emperor he guards has no clothes...

This is not surprising and is perfectly reasonable. As members of the NPT, states (including the Islamic Republic of Iran) have a right to a nuclear power programme. If that right is ignored by another state attacking a member of the NPT (which Iran is), the NPT would instantly become worthless and therefore, there would be no point in ANY state (not just Iran) staying as a member of it.

Timing is crucial... as pressure builds, the population questions "who is responsible for our suffering"... if a strike event occurs, do they break toward (with), or away from regime ?..

As next round of sanctions goes into effect, Iranians continue to hear barking but see no teeth. Stuxnet was novel and interesting but a tool and not a solution. I've been following this story since Iran-Contra and Ollie "I dont recall" North's testimony... Iran is not new to pressure, and West continues pushing on a string.