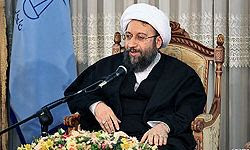 Iran’s Judiciary Chief Ayatollah Sadeq Amoli Larijani wrote to the country’s supreme leader that Khamenei’s directive to government leaders not to demonstrate their differences in public had “roots in pure fountain of Vicegerency.”

Larijani was referring to Khamenei’s role as vicegerent (deputy or representative) of the Hidden Imam on earth. Following is Fars’ English translation of Larijani’s letter to Khamenei.

“Long Live His Eminence the Supreme Leader;    Inheritor of Vicegerency; Salam-on Aleykom:
With all due respect, and congratulating your honor on the upcoming blessed occasion of Qadir-e Khom Eid, the blessed message of that most esteemed leader that has roots in the pure fountain of Vicegerency, addressed to the heads of the three branches of power was wholeheartedly received with heart and mind. I pray to Almighty Allah for assisting all of us to shoulder our responsibilities, and to obey and assist that Most Exalted Supreme Leader.
Sadeq Amoli Larijani    Judiciary Chief"   (Fars News Agency, 1 November)

Note: This is what the Islamic Republic has turned into. The head of the Judiciary, supposedly an “independent” arbitrator of the laws of land, proudly announcing his “obedience” of that “Most Exalted Supreme Leader.”

THAT IS WHAT IT SHOULD BE!

when you say that 'note- the head of the judiciary an independent arbiltrator of laws of land ,proudly ......!-this may seem your knowledge of Islamic LAW IS WANTING!.that is what it should be,even the HEAD of State has to swear allegiance to the LEADER.or else he becomes something else religious wise!!.

Religion should stay out of politics,military and the judiciary.

Religion should not be forcefully imposed on people because in the end people will rebel against the imposed religion.

This is already happening in Iran.The people are against imposed religion.

And the Larijani brothers (The Three Stooges)can dream on if they and that charlatan Rafsanjani with his corrupt family thinks they will have the power after the demise of the old three legged goat and his offspring.

Yeah because other countries show dissent during times of war. The U.S. Supreme Court ratified slavery, and GITMO.

We do understand the Islamic law rather well! Could it be that your lack of understanding of the rule of law in a civilized society in the 21st Century is the cause of our disagreement?

The problem is the rule of Law. That is the Constitution, the highest law of the land. If anything the shortcomings and internal problems clearly show the constitution of IR of Iran needs to be amended and changed heavily and structurally.
It also needs to be noted that just having the law is not sufficient, The law must be applied and respected once in place not like what has been practiced in Iran.

Under the facade of "independent justice system" the Iranian justice system is just a government tool.
When Ahmadinejad was asked by Larry king on CNN if he could secure the release of the American hikers acaused of spying, he responded by saying that he can't interfere in the Iranian juditionary.

Weeks later, under political pressure, the juditionary released the hikers "on bail" which really works as a "bribe" in Iran. No court was ever convened to try the hikers after they were released on bail and the judicial process didn't take its normal course as it would have in other countries with independent judiciary.

The so called justice system in Iran is a joke.
If anything these criminals that have held Iran hostage should be brought to justice in the very near future.

When I see these pieces of trash that have occupied my country,it makes me vomit.

Those flowers in front of him wont make him smell any better!

One of the filthy Larijani brothers.

Nice thick rope will do him nicely!