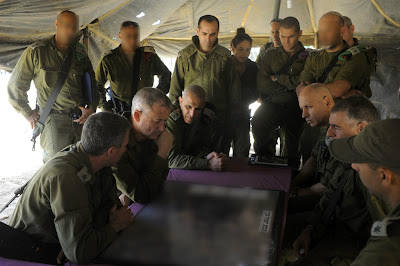 
More than 60 rockets hit Israel today, bringing the total number to 340 since Israel launched Operation Pillar of Defense on Wednesday. The Iron Dome has intercepted 55 rockets today. Rocket sirens were heard in Tel Aviv, Jerusalem and Hebron on Friday, but no rocket hit the cities. (Update: Iron Dome success rate in the first three days of the conflict is estimated at 87%).

Meanwhile, Israel hit some 150 targets overnight, bringing the total number of targets hit by the Israeli Air Force to 450 since Wednesday. The IDF reported that the targets included medium-range rocket launching site and ammunition storage facilities across Gaza. Destroying Hamas’ longer-range missiles seems to be a main tactical goal of Israeli operation.

Hamas, after months of trying to stop militant factions in Gaza from shooting rockets across the border, responded forcefully to Israel’s killing on Wednesday of its top military commander, Ahmed al-Jabari. Hamas seems to be emboldened by its newly found diplomatic stature and support from Egypt, Qatar and Turkey (The Egyptian premier was in Gaza to arrange a cease-fire.) The New Hamas is now vying to fill the Palestinian leadership vacuum created by a weakened and crisis-laden Palestinian Authority.

But Operation Pillar of Defense could at the end show Israeli combat readiness in face of a barrage of incoming rockets and its ability to severely damage and destroy Hamas missile capabilities.

UPDATE: The Gazan casualties as of Friday night have reached 29.
Posted by Nader Uskowi at 10:35 AM

The Zionist Regime of Israel Defense force's deadly air strikes on a Khartoum arms factory in Sudan and, recently, aerial bombardment of Gaza Strip in Palestine, is a show of anger, despair and frustration.

IRAN's powerful military might, and Israel's first defeat to Hezbollah Army of Lebanon back in 2006, have turned cowardly Israel's to fight against adversaries which are incapable of competing with Israel. That's all what it takes. What simple reasons!

The one-sided Zionist genocide in Gaza against the most densely populated gulag has once again exposed the cowardly and savage nature of the Zionist thugs armed with 21st century weapons supplied by the dedabeat US taxpayer. It is also hillarious to watch the Zionist cowardice and hysteria when a single antiquated rocket lands in their hovels of Tel-Aviv or Ashdod. One can imagine the total collapse of Zionist cowards if Iran and Hezbollah unleash their full might.

The best deterrance agsint these Zionist criminals is to keep them on notice that if they mess with Iran, Syria or Hezbollah their hovels will be razed to the ground. Only unlmited total war of attrition will rid the region of Zionism.

It is also ironic that the puppet Arabs are just watching the industrial scale genocide of besieged Palestinians in occupied Palestine by s savage and brutal alien force strutting on US weapons. Zionism is indeed a cancer and must be eliminated. All kudos to Hamas for standing up to the Zionist scum with slingshots against F-16s. VIVA PALESTINE.

-THIS WHOLE THEORY OF AN INVINCIBLE ISRAEL IS A FRAUD-this Nation of few million people ARMED to the teeth was meant to contain the ARAB PUPPETS,so as THE free flow of oil is not disturbed.when it comes to IRAN it becomes another story.DO YOU THINK THE AYUB DRONE THAT WAS SPORTED INSIDE ISRAEL IS THE FIRST ONE SENT BY HEZBOLLAH?..OF-CAUSE NOT,LET THIS NATION be advised that when the 'all options are on the table jock is put into practice,it would be very hard to contain IRAN!.

dear mat, as iran weakens and world opinion increasingly turns against it, Iran's proxies in the Middle east are being toppled. Assad is on the way after losing control of Syria, Hamas is desperate and trying to find a new sponsor in Egypt after being kicked out of Syria....... and Lebanese Hezbollah is wondering how they're gonna hang on without a re-supply pipeline for their weaponry.