Iran Has Upper Hand in the Region and the World – Khamenei 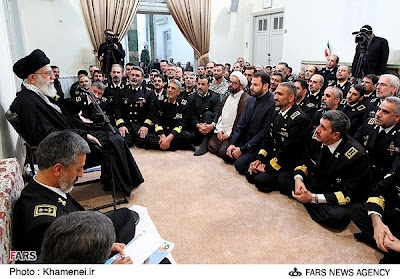 Iran’s Supreme Leader Ayatollah Ali Khamenei said today that Iran is witnessing the flourishing of its policies in the Middle East and now has surpassed the West in term of influence in the region. Khamenei made his upbeat remarks at a gathering of the country’s naval commanders at his official residence in Tehran.

The Iranian government-run press, in an echo-chamber type aggrandizement of the remarks, is calling the ayatollah’s speech historic. Fars News Agency said Israel’s “total defeat” in Gaza was the result of Iran’s superior military technology and its upper hand in the region and the world.

"Iran has upper hand in the region and the world"

In a few days a transcript will probably be offered at Khamenei.ir in English.

Rubbish for the toe rag village idiots that support the onion headed rotten and bankrupt mullahcracy.

they never sad or indicated that they want something from the world. I gess the world of the mullahs is the so called umah.
imagine we do not confrot them with any prejudices and take them seriusly like they want it soo bad.
i do actually try that sometimes and
the conclusion is:
yes IRs MENA policy was better then US`s and IR has been able to see some developments earlier and some were actually started or ended by the IR,but if IR is absolutly right why aren`t they no rolemodel at all.Not even for Irak.And i would ask them in the best persian polie and honest way to explain that via intnt. media.
In short they are not idiots not all of them and bombing democracy, letting all options on the table and striking for justice dosnt make more sense.

"Iran has upper hand in the region and the world"

BTW, the English translation is by Fars News Agency.

yes, he's is pointing out how the overthrow of the Assad dictatorship is really gonna work out well for Iranian influence in the area....and later on he went on to decree that all Iranians are soon to be six inches taller and all will decide that they simply must stop eating quite so much

Iran's stock has indeed risen. It has given the Zionists a thumping, its Syrian allies are on the offensive, Iraq is a close Shia ally and Hezbollah is stronger than ever. It has good relations with Sudan, improving ties with Egypt and has exposed yellow bellied Zionist cowards for what they are; bullying child-murderers and braggarts.

Economically Iran is plugging along despite all US/Zionist destabilization efforts and has no real threats. Its economic and commercial ties are increasing with Asia and all rising powers. It is sitting on top of global energy food chain.

That's precisely what I was referring in the post as the echo chamber. After repeating it so many times and hearing back approval from like-minded supporters, there is a tendency to believe one's own exaggerations! Hope the country's leadership does not fall for it.

Nader with all due respect to you and your blog, do you seriously think that Iran is about to fall apart? LOL. We have hearing this same type of baloney from Tehrangeles and Toronto based delusionals for the past 34 years and Iran has weathered many storms including an 8 year long slugfest with almost all the Arab world with total western support, crippling sanctions for last 34 years, terror campaigns, psy-op propaganada and NOTHING HAS COME OUT OF IT. Iranian F-14's are still flying, Bushere is online, Iranian naval yards are churning out frigates and subs, Iran Khodro is one of key auto-makers in the region, Iran is self-sufficent in most domestic goods and foodstuff, is net exporter of refined oil products (despite wishful thinking of refining collapse a few yewars ago), its military is second to none in sheer nationalism and motivation and I can go on and on. So please pause before wishful thinking. The Islamic Republic will thrive as long as there is public support. There has been a generational change in Iran that eludes the delusional set pre-1979diaspora and their children in the west. I wish you would be kinder to yourself and contain the self-hate and frustration.

Of course it is a frequently used tactic of changing the subject when you have a weak argument. I challenge you to produce a sentence or a single reference in this post that I was saying Iran was falling apart.

I was taking exception with the echo-chamber type declarations that are not based on realities. You say something and your friends loudly declare that you are right, and you start believing in what you had said! You are entitled to your beliefs, but not your facts. Iran does not have the upper hand in the region and the world. Don’t limit your information to Fars News Agency and Kayhan and like-minded media, for your own good and sanity.

The center bold headline: "Iran's Upper Hand in the Region and the World"

Nader, some of your points are vaild, however, my analysis was that despite very serious attempts to undermine Iran, it has more that survived and is still a large and powerful nation, hence, the reluctance of even the US not to take it on head-on, despite yellow bellied Zionist howls.

A recent study concluded that a mere 60 days of low-intensity conflict in the Persian Gulf would cost the US over $1.7 TRILLION conservatively. I believe that in view of the rapidly changing global situation and China about to become number one economy in the next five to ten years, Iran will thrive. Sure, things could be better, but considering the unrelenting US/Zionist/UK hostility, one has admire the Islamic Republic for not yielding. This is an obvious FACT. If you can shed some light on the "imminent collapse" of Iran and the date when the mullahs will simply "disappear", then you must be a sage too. Seriously, all regimes exaggerate, just look at the bodyguard of lies that comes out of the US, not to mention the idiotic daily hollow boasts of Zionists. I believe Iran pales in comparison to US boasting and sheer fabrications like used in WMD-Iraq war, Afghan quagmire, Wall-Street lies, not to mention the CIA lies factory etc....LOL...indeed.

rdsGenaFrom the literal translation of the Kayhan Farsi edition, it would appear that the Supreme Leader is saying:
Iran Has the Upper Hand in the world (he used Jahaan)

This comment is in relation with a meeting with Admiral Sayyari and other military personnel on the occassion of tomorrow's launch of Sina FAC missile corvette at Bandar Abbas dockyards. This is a statement directed at domestic audience and there does not seem to be much exaggeration involved.

This is the first time I am porting on this site but I felt I now need to because Nader, frankly you and your fellow commetators Paul and MD have turned this site in to an anti IRI fest isntead of news and objective views on Iran.

More specifically, if IRI newspapers are so bad and spread lies/misinformation - why do you and the good MD keep using reports/stories from IRI state media on this site? Logic dictates you stop using it!

I am neither Iranian nor anti/pro IRI but to continuosly read stories of how IRI media/official lie - well this site is just an echo chamber of Western MSM like Fox!

I am a regular visitor of your site but i have the impression that you are anti islamic government and this is absolutly ok for me but this implicates that no matter what they do or say you would deslike it.
maybe you dont see yourself as a jornalist but it is still important to remain neutral.
oh by the way when the USA would still back Teheran and not riad would that change something despite the US would have an upper hand in the region too.And dont forget Washington might want to pivot towards Asia. At Phnom Penh, Asian leaders in effect invited Obama to pivot 360 degrees and go home.

All hail his royal highness Khamenei, the true ruler of all muslims!

The headline and the content of this short post was based on Ayatollah Khamenei’s comments during his meeting with the naval commanders. We have double checked the accuracy of the English translation used here (by Fars News Agency) after we were warned that the translation, especially the headline, could have been inaccurate, and we checked again but frankly we believe Fars had it right. The anger you have directed to us is misplaced. If anything, you need to be angry at the ayatollah for making not so smart and precise remarks, I didn’t make them!