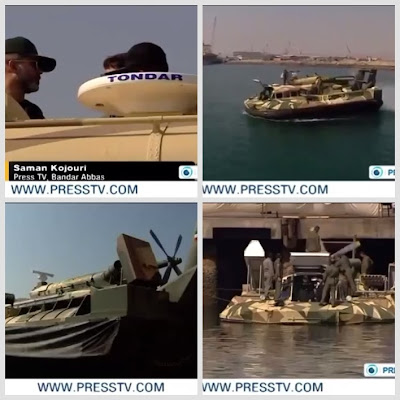 Iran's first domestically made hovercraft dubbed the Tondar تندر (thunder) was delivered to the armed forces today, according to IRNA. The Iranian Navy operated brittish made hovercrafts for decades and they saw combat in the Iraq-Iraq war.

The hovercraft will be deployed in two versions, a transport version, and a combat version which is capable of firing missiles and can carry and deploy unmanned drones. (1)

Of note, the Iranian military this time around acknowledged that its one of 5 countries with such naval capability and didn't claim to be the "First" in the world.

Below is a video of "network one (channel one)" report in farsi:

If the photo is accurate, this is likely a reconditioned and upgraded shah-era Wellington class BH.7 hovercraft.

The Iranians like to depict their reconditioned arms as being "indigenous." But their defense reporting is notably poor in detail, so media announcements shouldn't necessarily be taken at face value or be seen as official.

Thanks mark.
The same photo fom different angles appeared on Iranian news media so I assume its the actual craft being unveiled today.
The video clip link in the post appears to shows the same craft.

Mark, these are not reconditioned, but totally modified, upgraded and armored version of domestically produced hovercrafts. Thy are smaller than the old BH7 and are armed with 109mm rocket pods, and with Nasr 1 anti-ship SSM missiles that are more advanced and compact versions of C-704, which is already being used on the Iranian C-14 catamaran fast missile attack craft. Air-defence on these hovercraft is most likely fixed station Misagh2 and other Manpads. Great achievement by any standard. The google image link below clearly shows 5 of these craft parked at Jask (from the topography and layout of the naval facilities). WELL DONE IRAN.

"Mark, these are not reconditioned, but totally modified, upgraded and armored version of domestically produced hovercrafts. "

No, they're British Wellington class hovercrafts with some Chinese made missiles welded on the side. WELL DONE IRAN.

"Great achievement by any standard."

Western intelligence analysts have confirmed that Iran's military has for the first time equipped the Navy's hovercrafts with long-range missiles. Iran boasts one of the largest hovercraft fleets in the world and has extensive experience with these craft dating back to 1970's and the formation of Iranian marine units to safeguard its maritime interests. Iranian hovercraft saw action in Oman in the late 1970's and later in the Iran-Iraq war.

Iran is now pioneering the development of missile attack hovercraft, ideal for the marshes, inlets and shallows of the Persian Gulf. Iran has also reconstituted a marine fast reaction special forces brigade for quick deployment in the Persian Gulf region.

Recently, Iranian navy Rear Admiral Moussavi attached special importance to the installation of such missile systems on the amphibious craft and pointed out, “Regarding the hovercraft's special qualities, including high velocity and versatility..., they can operate in various coastal and naval areas.”

“The deployment of these hovercrafts has boosted the deterrence power of the Islamic Republic's Navy and substantially increased our capacities due to their high speeds,” Rear Admiral Moussavi concluded.

In recent years, Iran has made great achievements in its defense sector and attained self-sufficiency in producing essential military equipment and systems.

IRIN has successfully test-fired a range of powerful missiles mounted with laser technology on hovercrafts and high speed missile craft including the mass production of Seraj 1, designed on the specifications of the British Bladerunner racing boat,and capable of 65 knots or over 100 mph. These news naval systems are mounted with missiles which display high precision and have a range of 45 km (28 miles) to 300 km (186 miles).


Iran is rapidly gaining new capabilities to strike at U.S. warships in the Persian Gulf, amassing an arsenal of sophisticated anti-ship missiles while expanding its fleet of fast-attack boats and submarines, U.S. and Middle Eastern analysts say.

The new systems, many of them developed on existing Iranian systems and hybrid technology, are giving Iran’s commanders new confidence that they could quickly damage or destroy U.S. ships in the narrow confines of the Persian Gulf if hostilities erupt, most western defence officials acknowledge.

Increasingly accurate short-range missiles backed up by mobile launchers and coastal artillery— combined with Iran’s use of “swarm” tactics involving hundreds of heavily armed patrol boats, midget submarines and underwater craft hidden in hundreds of inlets and marshes along its 1500 kms coastline in the Persian, dotted with rugged terrain and highly fortified islands— could strain the defensive capabilities of even the most modern U.S. ships, current and former military and naval analysts predict.

@anon 8:30 pm
Thanks for the info.
What is your source with regards to specs?

MAY THE ALMIGHTY' BLESS OUR BROTHERS AND SISTERS IN THE IRANIAN DEFENSE INDUSTRIES!

the picture from fars is pretty evidently a file photo and is not the model that has been launched... why keep it in the post?

@anon 8:30 am
I think you and mark are right. It's a shame that we can't even trust Fars news and IRNA to say when they are using file pictures of an import when they post news about indigenous products. Oh we'll, ill try to extract a picture from the video.
I'm also curious if you or Mark or others could offer opinion as to the missile firing portion of the clip. It too could have been an insert from prior maneuvers involving the BH.7.

Ha Ha Ha Mr Fazili some, Even believe Apollo project was a hoax !!

What an appalling way to speak, that reporter has. Presstv should invest in employing people who can speak English decently. My ears feel like they have just been assaulted.

Wow,these idiots are the same type of people that said Iran was wasting its money on the latest arms purchases during the previous regime.

F14 Tomcats for $25 million a piece.Hovercraft purchased in 1973,Chieftain tanks the best for its time etc.
The best that money could provide including arms factories for missiles and F16s by Northrop,Helicopter factory by Bell Helicopters in Isfahan,tank factory in Isfahan,in fact all the foundations of the military industry that we have today in Iran.
These idiots wanted to give back the F14 Tomcat to the Americans because they claimed they had no use for it!
They also cancelled the Iranian Nuclear program for the purchase of 20 Nuclear reactors and an enrichment plant setting back the program behind by 25 years,the morons.
Now the morons are claiming this and that "achievement" all based on the purchases of over 40 years ago.
They've destroyed the economy and banking sector of the nation.They've destroyed the oil industry and currency.China is flooding the country with cheap junk like shovels,shoes and god knows what else to benefit the IRGC bandits and smugglers.
Ten million people are crack and heroin addicts.People are selling their organs in a country that should be the top eighth economy of the world and these morons are boasting about a technology that has been around since the early 1950s!
This regime is a millstone around the Iranian peoples neck and should be got rid of to restore our national honor and dignity, both for men and women so that ordinary people can live their lives instead of being used as pawns for the interests of religious Islamist bigots who hate anything got to do with true Iranian culture.

@ jabbar
The video from the launch shows it launching from a container to the right of the hovercraft while the indigeounous one has it placed on the left... so either their is more then one copy, they changed its positionning (the angle of the missile container is actually kinda weird seeing as it would creat lots of drag), or yeah its just more archive footage...

Iran brings it on itself when it keeps lying habitually. It is standard journalism to note that a picture is an archive picture if its not the real thing. It's also not kosher (sorry, cant help it) to mix archive footage with an unveiling of a new product to spice it up. Sooner or later they'll get caught and lose credibility, like in this case.

yeah, JF....they've oh so much in way of credibility that they're jeopardizing.

Photo replaced with ones from the video clip. sorry

Wonder-weapons! But there are two types of old british hovercrafts depicted in the news story: Wellington BH.7 and SR.N6 as you can easily distinguish here: http://www.shahyad.net/iiarmy/Navy/Hovercraft/Hovercraft.html

In the clip the reporter is stating that Iran is now able to manufacture an entire hovercraft from scratch and may also export them, specifically the one demonstrated in the clip is supposedly one example. In the comment section people say that all of Iran's hovercrafts, including the previously mentioned one, were infact purchased during the era of the Shah, but now with additional equipment mounted on it, which is why it has been stamped as "indigenously built" by the Iranians. It all becomes very confusing... Someone is twisting and distorting the truth...