Ahmadinejad Calls for Direct Negotiations with the U.S. 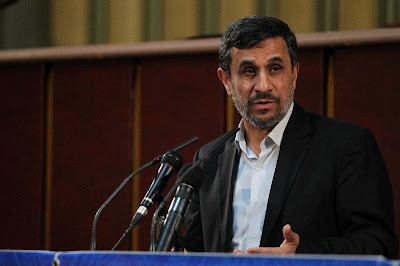 Iranian President Mahmoud Ahmadinejad told reporters in Bali that Iran’s nuclear program has been turned into a political issue and the impasse over the program should be resolved directly between Iran and the United States. (IRNA, 8 November)

Ahmadinejad’s remarks were the latest by a senior Iranian official suggesting that Iran-U.S. direct negotiations over the country’s nuclear program are not only acceptable but desirable. On Wednesday, Mohammad Javad Larijani, secretary of Iran’s High Commission for Human Rights and brother of both the speaker of Majlis and the Judiciary chief, said “To protect the interests of the regime, we would negotiate with the U.S. or anyone else.”

Iran’s Ministry of Intelligence also posted a report on its Website on Wednesday saying to avoid military conflict over the nuclear issue, Iran needs to take “diplomatic and political measures and use the potentials of international bodies, which is a necessary and less costly option.”

The MoI report, titled “Reasons and Obstacles of a Military Attack by the Zionist Regime Against Iran,” also makes a clear distinction between positions by the Israeli government and the U.S. administration. It says President Obama “hopes to solve this issue peacefully and through diplomacy.”
In Bali, Ahmadinejad also told reporters that Iran needs to examine, “Why and who broke diplomatic relations with the U.S. some 33 years ago.” He added that he believed in existence of diplomatic relationships based on mutual respect.
Photo credit: Iranian President Mahmoud Ahmadinejad at a press conference in Bali, Indonesia. 8 Novermber 2012. (IRNA)
Posted by Nader Uskowi at 9:02 AM

Of course the regime was CIA and MI6 pet project.
The project was to send Iran into the 7th century and keep it there.
So far they have succeeded.

most anyone who knows ANYTHING about CIA would tell you that they could never have produced such a project so wildly successful in retarding any progress in Iran.

Could never have been US intention then or would have imploded in short order.

Sorry dumb Iranians; you lost the chance for a deal by over-haggling. Now you'll have to beg.

How little you know.But don't worry, hopefully in your lifetime the truth will be revealed.

I do know just a little and know how poorly the Dulles brothers planned their little adventure in Iran and how badly it turned out for everybody.

The only dumb person here is you so take your insults and shove it where the sun don't shine.