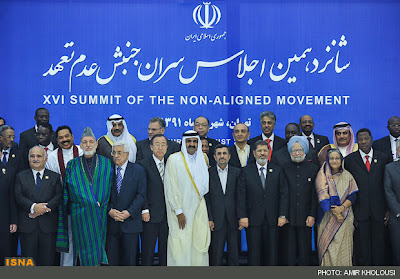 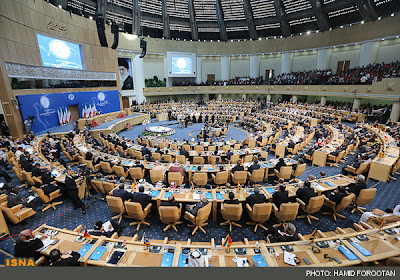 The 16th Summit of the Non-Aligned Movement (NAM) wrapped up today in Tehran. Venezuela will host the next NAM Summit in 2015.

That was a very good move by Morsi, who is 'islamic' and 'democatic' , which the IRI has always pretend to be, condemning Assad - Morsi was essentially saying to them: you cant get away with your anti-americanism and anti-semitism; that is moral and political dead-end; there is no understanding in your 'anti-americanism' as you imagine it to be there; it is nothing there but a resentful lie; this very important distinction was made in Tehran by Morsi; now he is the leader of Moslem world; Khamenei is the loser.

Morsi can now assume positions endorsed by Khatami and iranian Reform Movement: being 'islamic' and 'democratic' - without being antisemitic; that is what Morsi means; IRI could not handle this move in Iran; now they have no other choice to accept that reality.

Khatami like Khamenei and Mousavi are all cut from the same cloth.
There is no such thing as "islamic and democratic."
You can't mix oil with water.

Therefor,there is no reforming this regime.

And another thing. Morsi maybe the leader of the Muslims in the Arab sphere,but Iran is not part of that sphere.Iran is interfering in Syrian Arab and Lebanese affairs, but never the less it's not part of the Arab world.

I see you are not antisemites...

Anti- americanism is the same like antisemitism, because those two countries have common ties like master and "satelite".
Which one would you designate as a satelite?

Anon 6:22---- you seem rather confused so to help you out, when to countries have a common tie, the satellite is the satellite country is the one that has the tie around it's nck rather than the one holding the ends of the tie in its hand.