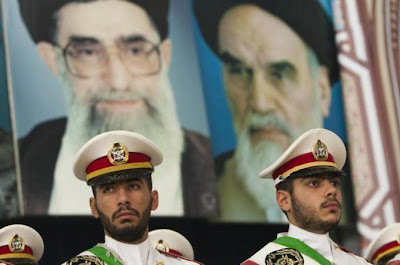 Hamid Dabashi
Hagop Kevorkian Professor of Iranian Studies and Comparative Literature at Columbia University
“Iran must deal with its own people before it can continue jockeying for geopolitical gain in the region.”
Published by Aljazeera
20 August 2012
Photo Credit: Aljazeera
Posted by Nader Uskowi at 9:47 AM

After 2009 (election) the regime has lost the ability to talk to iranian society - irredeemably; they have nothing to say or talk about to iranian people about the reality; there is no common ground there anymore; they know it; what they are left with is their antisemitic vocabulary - and nothing else; und even that antisemitic vocabulary does not return their investments in it any more; even arabs dont buy that crap anymore

Anon 10:51 AM......The regime was never legitimate.Even before the so called elections.
Now it is plain bankrupt.


Wash your mouth and shut it.

Anon 5:01 PM......Aren't you aware you're in an Iranian site?
If so show some respect to the Iranian victims of the earthquake.
If you can't do that,then take your shameless blasphemy elsewhere.

I agree,but with a difference,the regime is in dire straits.And all they have to defend them is cowards like this Anon 5:01 PM who spew out their disdain towards the innocent victims of the earthquake.
Now you know why Ali Khamenei shows his contempt towards the victims,when he has his minions abroad reflecting his opinions.

It is irrelevant if I am Aware of Iran site or not, what use if I and another Exil Iranian are aware or not. They donot help anyway
Earthztquake victim, They are only aware

My point is:
The Iran is not in Daire Strait
The Aljazeera is uneased because
of Success of Syria over Terrorist
and aid of Iran to Syria and lose of money in Syria
takes a limited local disaster
and makes demagogism