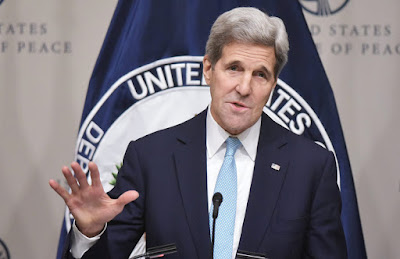 Secretary of State John Kerry said today the U.S. and its allies remain firmly opposed to any role for President Assad in Syria’s future, drawing a sharp line of disagreement with Russia and Iran before Syria talks resumes Saturday in Vienna.

Asking the opposition “to trust Assad or to accept Assad’s leadership is simply not a reasonable request,” Kerry told a gathering at the United States Institute of Peace in Washington. “It is literally, therefore, a non-starter.”

Kerry added that ISIL has a symbiotic relationship with the Assad regime. “They even do business with each other,” Kerry said, “buying and selling oil.” Kerry said Assad and ISIL “are enemies far more in theory than in fact, and neither has shown any interest in bringing the killing to an end.” (Bloomberg, 12 November)

Kerry also listed areas of agreement with Russia and other nations over Syria: Inclusive governance in Syria, free and fair elections, and the need to keep state institutions intact.

In Vienna, Russia will present an eight-point plan calling for creation of a constitutional reform commission made up of opposition and regime figures. There are no provisions in the Russian plan to bar Assad from staying in power or from running in a presidential election that would follow a referendum on a new constitution. That’s what Kerry called “a non-starter.”

Wow isn't that rich? "They even do business together" Shocking stuff! Wouldn't catch the US or any US allies doing that? Surely the Assad question will end when its been agreed to which time frame and what constitutional reforms are to be taken. With the re-invigorated Syrian government securing further strategically important victories, perhaps soon they will be in a position to even cede territory to the FSA or others as part of a ceasefire agreement. At least that would give pause so as the true patriotic Sunni's who had the bravery to stand up in 2011 can first and foremost destroy this Daesch travesty of a noble religion. Maybe there are many men in Al Nusra who could still believe in democratic political Islam. Maybe there is 30,000 men on a journey through Europe who would fight again if they could see an outcome. Turkey and its leaders are the key. If they were wise they could guarantee a ceasefire with boots and tanks on the ground held by the FSA and others agreeable to a ceasefire.

I do really disagree Kerry's statement. It is not US nor any other country to decide Syrian future. Amrican want's him removed and that for their influence in the region however this is up to people in Syria to decide not outsiders. Keep in mind that tehre are lots of people including Alawit, Christian and kurdish people who want to see Assad as president.

That's an interesting observation. But I guess, and correct me if I am wrong, you are not including the Iranians and Russians as foreigners who want to decide Syria's future, in this case by supporting Assad and fighting the opposition. You see Assad could not have lasted as president if he had not received the military aid from Iran, Lebanese Hezbollah, Iraqi/Afghan/Pakistani Shia militias and the Russians, all foreigners, none Syrian. So the principle that the future of Syria should be decided by the Syrians only should also call for these pro-Assad foreigners to leave the country. No?

Its true that the US and allies are not the only foreigners meddling. Russia, Iran.... Have boots on the ground. It is also true that the Syrian people have to make some choices. For them to be able to do so, ceasefires need to be agreed. Meaning, ceasefire lines need to be agreed. Meaning disengagement. Meaning foreigners in the form NATO moving into non government held area's of Syria.to restore order, police ceasefires and facilitate free and fair elections. After Paris? The ball may actually have started rolling.