The turnout in today's election was at 86.68%, the biggest ever in Turkish history. APK regained the 9% votes it lost in June, CHP remained the same and MHP crashed. The pro-Kurdish HDP makes it into parliament, as in June.

The outright victory by AKP allows Erdogan's party to form the new government without forming a coalition. The surprising results ran against recent opinion polls that predicted AKP to be unable to receive a majority. The polls probably did not predict the unprecedented turnout in today's election.

Turkey votes today in its most crucial election in years. Erdogan’s Justice and Development Party (AKP) lost its parliamentary majority in June for the first time in 13 years of single-party rule and then failed to form a coalition government, forcing the new election.

A total of 54 million Turks are registered to vote. The opinion polls were predicting a replay of June’s election, with AKP receiving some 40 to 43 percent of the vote. All eyes were on the People’s Democratic Party (HDP), which made history in June when it became the first pro-Kurdish movement in parliament and gained enough seats to block an AKP majority.

If the final results show an outright majority for AKP, indicated by early returns, Erdogan could form a government without the need to form a coalition. It is not known if he would still try to form a coalition government with the Republican People’s Party (CHP), a Kemalist, social-democratic party, Turkey’s oldest political party. A more broad-based government would ease political instability in a country polarized along ethnic and sectarian lines with a faltering economy. 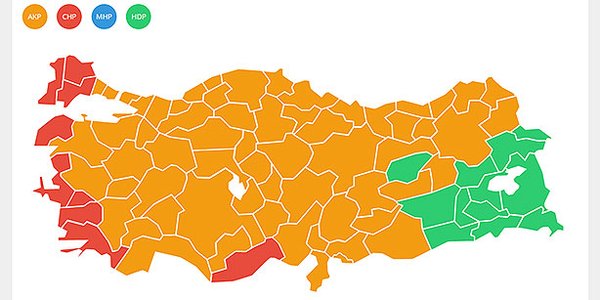 vote for HDP, against Dictator Erdogan

He might have become authoritarian, but there's a reason why he and his party keep on winning.

All major polls were predicting the same results as in June, when AKP lost its majority. What they probably missed was a historic voters turnout at nearly 87% in this election. It seems the AKP was successful to turn out many people who would not have otherwise voted. The result is a historic victory for Erdogan and AKP, with a new mandate to govern. His victory will have huge implications not only for Turkish internal politics, but as important in solidifying Erdogan's regional policies.

Nader what regional policies? Does it includes that of using Turkey border as conduit for jihadist into Syria? To me even though my opinion counts for nothing this victory simply means more blood shed in Syria, humanity will bear the brunt of this victory as Edorgan will feel more embolden in implementation of such bloodletting policy both in Syria and on the Kurds. Democracy may be the best form of government invented by humans but its shortcomings sometimes appears too costly to endure.

Erdogan ist of course got 50% votes, but he is not good president

The turks wants him because he is leader of an islamic party
he is splitting the Nation and goes away from EU.
a EU member turkey is good for Business, good for turkey, for Iran ...