Iran Says It Walks Out of Syria Talks if “Unproductive” 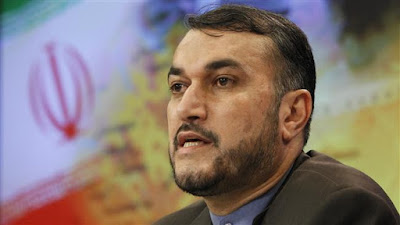 Iran’s Deputy Foreign Minister Hossein Amir-Abdollahian today criticized what he called Saudi Arabia’s “unconstructive role” in recent Syria talks in Vienna, threatening to walk out of the talks should the next meeting be “unproductive.”

“Some countries, particularly Saudi Arabia, played negative and nonconstructive roles (in the recent meeting), as they could not provide a logic for their positions vis-à-vis Syria’s conflict,” Abdollahian said. “If the negotiations will be ‘a show’ and rights of the Syrian people are ignored, Iran will pull out of the talks.” (Xinuha, 2 November)

Following Syria talks on Friday, Saudi Foreign Minister Adel al-Jubeir said the talks should entail a decision on a date and means for the departure of President Bashar al-Assad, as well as the withdrawal of all foreign forces from Syria, including Iran.

A day later, Jubeir used a high-profile regional security conference in Bahrain to accuse Iran of attempting to smuggle weapons to Bahrain and Saudi Arabia, as well as meddling in Lebanon, Syria, Iraq and Yemen, Reuters reported.

Iran needs to get out of Arab affairs and focus on its own development. Nothing good ever comes out of Arab failed states. Let Turkey suffer the consequences. Iran should strengthen its military and just let Arabs kill each other as they have done for 1400 years.

Bravo Iran don't be part of a game. It is so stupid to act like Saudi Arabia and Turkey supportIng four years the killing machin daesh and now to participate in an so called attempt to stop violence in Syria. How could they seat face to face to sooo many well known ppl and just....aaaaahhh it's really crazy. But I try to take it with a touch humour