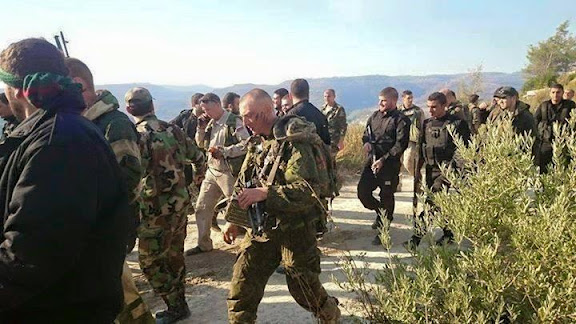 
While the Russians were planning for another operations to free the pilot immediately, General Soleimani contacted [Russian forces] and proposed a special task force unit be formed of Hezbollah's special forces and Syrian commandos who have been trained by Iran and are fully familiar with the geographical situation of the region to be tasked with the ground operations and Russia provide them with air cover and satellite intelligence.

Soleimani promised them to return the Russian pilot safe and sound; a promise that was kept in the end, according to the Syrian officer.

After tracing the place of the Russian pilot using his GPS, it was revealed that the pilot was being kept in a place 6km behind the frontline of the clashes between the Syrian army and the opposition.

Six fighters of Hezbollah's special operation unit and 18 Syrian commandos approached the frontline to carry out the operations and the Russian air force and helicopters concurrently created hellfire in the region and destroyed the terrorists' headquarters in a way that most of the enemy forces deployed in the region fled the scene and the ground was paved for the special unit's advance.

The Syrian officer added that every move of the special units was monitored and covered precisely by the Russian satellites in a way that the slightest moves made 100 meters away from the area of operation was reported to them and every moment of the operation was reported to a very high-raking official in the Kremlin (that he thinks was president Putin) and it was clear that he was monitoring the entire operations through satellites from Moscow.

According to the officer who called for anonymity, the operation later turned into a hunt of the terrorists in the operation zone by the Russian air force from the sky and by Brigadier General Soleimani's operations units on the ground.

COMMENTARY: Some of the details of the ABNA report haven't been verified, however it has apparently been corroborated that an 18-member Syrian commando team linked up with a 6-member Hezbollah special operations team already sitting near a border crossing point to effect the rescue.

It has been pointed out by another observer that the Iran-backed Hezbollah special operations team was performing a SICTA (strategic intelligence collection / target acquisition) mission. Such teams are probably all along that border right up to Jarabulus. [see HERE]

While others have been pointing to the Syrian conflict as a drain on Iranian and Iran-backed forces such as Hezbollah, this writer has stressed the expansion of capabilities--particularly on offense--that the Syrian conflict has spawned during the course of the war.

It says Hendawi was responsible for bringing into Lebanon two suicide bombers who carried out the Nov. 12 attack in southern Beirut. The attack killed 43 people and wounded more than 200.

COMMENTARY: If accurate, such a strike by Lebanese Hezbollah (LH) represents a successful counter-terrorism operation beyond the formal boundaries of said military force.

While the United States, Israel, EU and GCC consider Iran-backed LH a terrorist organization, Russia does not, as expressed at the Vienna II Syrian conflict resolution talks. This may be considered another point of contention beyond the fate of Syrian President Assad, between the U.S.-led coalition against ISIL on the one hand, and the R+5 (Russia, Syria, Iran, Lebanese Hezbullah, Iraqi PMF and Syrian NDF) on the other.
Posted by Mark Pyruz at 1:06 AM

SAA and Hezbollah will be the best of the best when all this is over, no small thanks to Iran.

Hezbollah has been placed in top 5 special forces category among
SAS US SOCCOM Brazil Germany and Russia.

Anon 01:21
Hizbullah makes the top five list but the Israelis don't ?
I think your comment easily makes the top spot in the " funny but totally ridiculous " list .

Some T90 Tanks were deployed to South Aleppo to deal with TOW missiles which is being used effectively by insurgents and has inflicted significant damage to Syrian Army and the allies. Syrian army is planning to conduct an offensive on this front (or Hani Tuman) to break the long imposed siege on Al Fuah and Kafarya. In addition SA has gained the upper hand on Northern Latakia front, advancing steadily toward Jisr Al Shugur In Idlib. Should these operations continue successfully we should expect seeing SA in Idlib Soon.

Israel is a Hollywood fantasy, so deal with it.

"Israel is a Hollywood fantasy, so deal with it." - this man clearly knows his countries. Never in all my years have I heard a comment as stupid. it's not fantasy it's real life. WAKE UP. When comparing Hezbollah to the IDF is rather complicated. But to place Hezbollah special forces in the top five special forces is really stupid. I mean israel is not on that list. when if you speak to a real veteran of the Lebanon war they will tell you that Hezbollah troops, even the more experienced and better trained Hezbollah special forces avoided direct firefights with basic Israeli infantry troops. The Israelis are doing laps around Hezbollah in terms of gear, expirence and training. Idf general infantry special forces units such as maglan train Americans, German, and Greek units with comparable rolls. Recently I was conducting an interview with a veteran of the Lebanon war for a University paper. This man served with Lotar. He said that when training American infantary, the Israelis noted a lack of understanding of combat tactics and proper counter terror techniques within the American troops. This is why when they started training with the American special forces they were very supprised to see that unlike there infantry counterparts the american special forces were very experienced and well trained. Then when I asked him about the Russians and spetnaz he said that the Israelis see there training as poor noting the focus on irrelevant or outdated practices. Then when asking him about Iran he mentioned the multitude of failures within the Iranian security establishment all the way down form oghabad 2 (excuse my spelling) to the quds forces. The Iranians have completely failed at stopping Israel funded espionage and there "special forces" have had quite a few embarrassing moments in Syria (look on live leak). It is those special forces training Hezbollah so I would really not worry too much about Hezbollah's capabilities. If there was to be another war, and we all hope there won't be. The Mossad will activate espionage (sayanim) cell's within Irans miltary and political elite. While the IAF will Level Lebanon within 48 hours. Then the oz brigade will advance in to Hezbollah held villages. Finally the paratroopers, artillery, Golan, givati and all the rest will advance and hopefully do a lot of damage to Hezbollah's infrastructure.

"The Israelis are doing laps around Hezbollah in terms of gear, expirence and training".