Paris was hit on Friday night by a string of deadly terrorist attacks, leaving 129 people dead and many more wounded. The attacks began just after 10 p.m. local time in at least seven locations in and around Paris.

President Francois Hollande has declared a state of emergency throughout the French territory and has ordered borders closed to prevent escape of the terrorists.

“We will stand together. We will never bow. We will never break. That’s the character of our two nations,” said Vice President Joe Biden in a statement on the Paris attacks.

UPDATE: Eight terrorists are killed, seven of them suicide bombers. More gunmen might still be at large. Paris is on lockdown. 7,000 troops have been deployed on streets of France. A massive manhunt is underway.

UPDATE: Thousands sing La Marseillaise, the French national anthem, during the evacuation of Stade de France, the national stadium north of Paris, after the terrorists attempted to attack the venue during the French-German friendly attended by President Hollande. 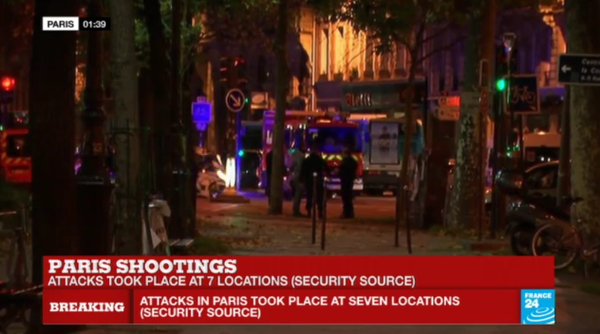 First Russia, then Lebanon and now France? ISIS must be hurting, right?

of course they are hurting
at battle filed the isiss losing , for terrro attack you need only 5 poeple

Many times ,I mentioned that ISIS is based on Wahabi ideology promoted by Saudi Arabia because this tainted religious ideology is state religion of Saudi Arabia.
US & EU always delibrately overlooked the above fact to get big defence contracts of Wahabi Persian gulf Arab states.
To destroy the ISIS, it's time to CUT the head of snake (Saudi Arabia). This country is the root cause of all evil on the name of Islam across the globe. PARIS is the latest victims of this Wahabi (ISIS) ideology.
It is a real time to back Russian, Syrian regime & Iranian efforts to destroy ISIS in real sense on ground.
May God rest of those killed in peace in Paris.
Rizvi/India