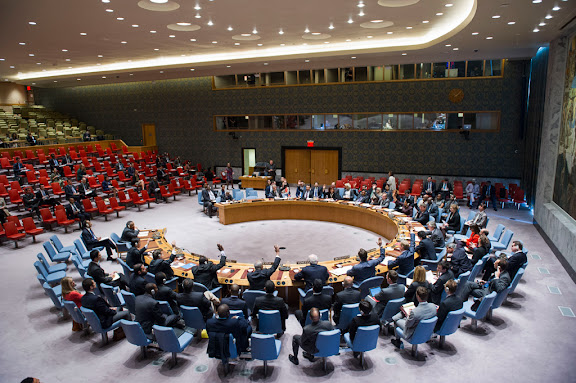 According to the UN News Centre, dated 20NOV15:


The United Nations Security Council this evening called on all countries that can do so to take the war on terrorism to Islamic State-controlled territory in Syria and Iraq and destroy its safe haven, warning that the group intends to mount further terror attacks like those that devastated Paris and Beirut last week.

In a unanimously adopted resolution, the 15-member body declared the group’s terrorist attacks abroad “a global and unprecedented threat to international peace and security” following the “horrifying terrorist attacks” it perpetrated recently in Sousse (Tunisia), Ankara (Turkey), over Sinai (Egypt) with the downing of a Russian plane, and in Beirut and Paris.

It warned that the Islamic State in Iraq and the Levant (ISIL), or Da’esh as it is also known, “has the capability and intention to carry out” further strikes and called upon “Member States that have the capacity to do so to take all necessary measures, in compliance with international law, in particular international human rights, refugee and humanitarian law” on its territory.

Condemning “in the strongest terms” ISIL and other terrorist groups in the region such Al-Nusrah Front, the Council Member States “to eradicate the safe haven they have established over significant parts of Iraq and Syria.”

It called on Member States to intensify efforts to stem the flow of foreign terrorist fighters to Iraq and Syria and to prevent and suppress the financing of terrorism, and reaffirmed that those responsible for terrorist acts, violations of international humanitarian law or violations or abuses of human rights must be held accountable.

COMMENTARY: The full text of the resolution hadn't been uploaded by the UN at the time of this posting but it appears the the government of the Syrian Arab Republic was not condemned in the resolution, which is significant. According to Russia Today, dated 20NOV15:


Syria’s UN Ambassador, Bashar Ja’afari, hinted prior to Friday’s vote that this resolution was long overdue. “Welcome to everybody who finally woke up and joined the club of combating terrorists.”

Meanwhile, Russia is continuing its work on a draft resolution proposing international military campaigns to fight against Islamic State. The current text is an updated version of a document submitted on September 30.


The U.N. General Assembly’s human rights committee Thursday adopted a Saudi-drafted resolution condemning Iranian and Russian intervention in Syria, a decision that the Syrian and Iranian delegations rejected as unhelpful and unjustified. The nonbinding resolution, authored by Saudi Arabia and sponsored by Qatar and other Arab nations, the United States and other Western powers, passed by the 193-nation assembly’s third committee.

Without explicitly naming Russia, it said the General Assembly “strongly condemns all attacks against the Syrian moderate opposition and calls for their immediate cessation, given that such attacks benefit so-called ISIS and other terrorist groups, such as Al-Nusra Front.”

The resolution’s language is clearly aimed at Russia, which has been bombing opposition forces in Syria for two months. Moscow says it is attacking ISIS but Western officials say they have targeted other rebel forces and Western-backed groups.

The resolution also condemned the presence in Syria of “all foreign terrorist fighters ... and foreign forces fighting on behalf of the Syrian regime, particularly the Al-Quds Brigades, the Islamic Revolutionary Guard Corps [of Iran] and other groups such as Hezbollah.”

It also blasts ISIS and other Islamist militant groups for rights abuses and atrocities.

But most of the criticism in the resolution is aimed at the government of Syrian President Bashar Assad, whom Western and many Arab nations would like to see ousted.

COMMENTARY: Predictably, the Syrians and Iranians rejected the resolution. The Iranian response was put forward by Iran’s Ambassador and Deputy Permanent Representative to the United Nations Gholam Hossein Dehqani. According to PressTV, dated 20NOV15:


Dehqani warned of the “adverse consequences” of the resolution on the UN reputation and said Iranian military forces are present in Syria upon an official request by the Syrian government to provide consultations to the war-hit country.

“Therefore, the adoption of such a text is a violation of international regulations and a breach of governments’ right to establish peace in their own territory,” the Iranian envoy pointed out.

He said such claims are aimed at taking revenge against forces that have so far played the most effective role in the battle against terrorism and extremism, adding that Daesh terrorists would have overran more areas in the Middle East in the absence of such forces.

The Iranian diplomat once again reiterated that the resolution would act as an award for extremists and terrorists as well as all those who use financial and logistical resources to spread extremist and terrorist ideologies.


Syria's U.N. Ambassador Bashar Ja'afari rejected the resolution and accused its Saudi authors of hypocrisy about what he said are widespread human rights in the kingdom. He referred to "decapitation and flogging in public squares," saying they were like abuses of Islamic State.

He accused the Saudis, along with Qatar and Turkey, of supporting what he said were terrorists in Syria.

The delegates of Qatar, Turkey and Saudi Arabia rejected the charges.

UN resolutions are useless as over 437 have been passed on Palestine alone and no results, however, in this case only boots on the ground will work and no nation including Russia and Iran are game to put in around 200,000 troops and several hundred aircraft to go after the ISIS terrorists who have sanctuaries in Turkey and Jordan. Turkey today called in the Russian ambassador to complain about the Russians bombing the fleeing IS terrorists near the border, so don't expect much cooperation. The Russian FSB estimates that 9000 IS have been killed and other 10,000 fled to Turkey and Jordan. If you look at twitter feeds from Syria, the IS and al-Nusra terrorists are openly fielding tanks, MLRS and artillery without fear of any airstrike, so whatever Russia is doing is not enough and the air sortie rate combined with rapid Special Forces helo troops are needed. This bombing will only spread the terrorists into smaller cells and all over the world. The idea should be to contain them Iraq and Syria, seal the borders and kill them. Many of the terrorists are making their way back to Europe and the future is not looking very rosy either.

Nader, Can you inform us about the resolution against Iran and its implications as well?

UNGA human rights resolution text not yet uploaded at UN.org. When it is uploaded, will provide URL.

What does it say about the un and its so called "human rights" committee when it not only allows backward medieval nations like saudi arabia that have zero human rights to sit on a committee dealing with human rights,but then it allows the saudis to draft resolutions that are then adopted.Does the un not see or care that this is bringing it even further into disrepute?.What a sick,sick joke!