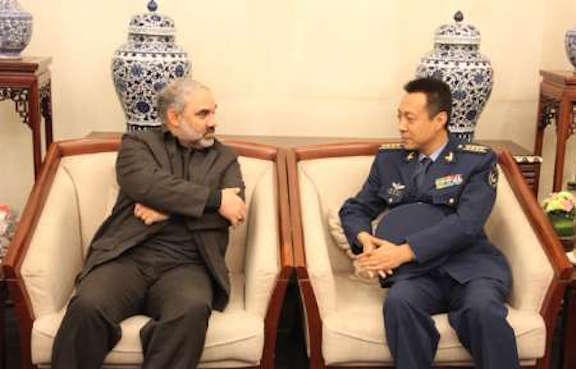 Shah-Safi on 04NOV15 is scheduled to meet with PLAAF Gen. Xu Qiliang, Vice Chairman of the Central Military Commission (CMC) of the Communist Party of China.

COMMENTARY: There are indications PRC and IRI are to engage in renewed military hardware and technology transfers, following the implementation of JCPOA and subsequent repeal of sanctions.

It is further expected Iran will become a member of Shanghai Cooperation Organisation (SCO), that includes a military dimension. From the perspective of SCO members, current challenges include conflict at Ukraine, and a territorial dispute on the South China Sea. Iran, as a regional power, may be seen in this context as potentially contributing towards a balance of power relative to the U.S.-led security order.

Members of the Iranian military delegation with their Chinese counterparts, on 01NOV15 in Beijing 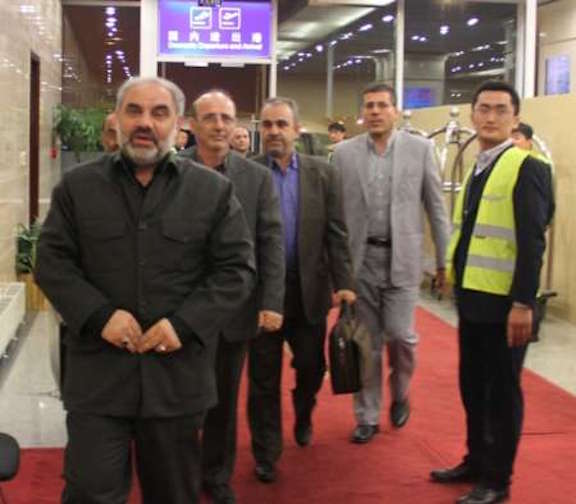 IRIAF Commander Brig. Gen. Hassan Shah-Safi with military delegation upon their arrival at Beijing. By the setting and personal  appearance, it's likely they travelled by means of Iranian commercial carrier flight.

Ali Akbar Salehi (Chief of the Iran Atomic Energy Agency) had also visited China a while ago negotiating a replacement plan for Arak Heavy Water Reactor. He is in Japan Now, negotiating some peaceful nuclear cooperation with Japaneses. Japaneses are one of the leading nations in Fusion Nuclear Technology.
I am wondering if some body has an information about the extent and scope of any cooperation between Iran/China and Iran/Japan.

Iran has traditionally had very good and long-term relations with both nations...of course China since the ancient time, but even during modern time both nations have been looked up to by Iranians because of their economic and technological development. Japan had a unique position among Iranians as it was the only Asian nation to challenge North America and Europe in science and technology. That positions has now increasingly been taken over by China.
As per the current regime in Tehran alignment with China and Russia (two permanent members of UN security council) is a strategic and not a tactical move. Japan on the other hand does not have that status.
For Japan Iran is looking for being the primary oil and gas provider, of course Iran will strive for it but not probably reach it soon. Iran is also looking for Japan to invest in Iran, specially in the Iranian car industry, fine electronics and also I believe rail, ship industry, civil aircraft manufacturing and other advanced areas. Iran will primarily look for joint-ventures, but of course in certain areas they need to purely import.
As per China, Iran needs to pay back its debt for enjoying the veto during tough time. Unfortunately the poor foreign policy in the US prior the final Obama years, has pushed Iran towards Russia and China and as such Iran needs to pay these guys in order to keep them happy and enjoy their support.
Energy export to China is vital so Iran is looking for its status here again. As per oil industry the Chinese want to make sure the big cake is going to them and not the Japanese or Indians so they will do whatever they can to be involved here. Furthermore military export is important for China and here they know Iran needs generation 4++ and 5 fighters. Iran's experience from the Iran-Iraq war showed F-14 was a deadly weapon which basically silenced the enemy air force during the entire war. This can be compared to F-22 today...which is not close to what Iran can get. As such Iran has planned to produce gen 3++ and light gen 4 domestically, have joint venture and pure import on gen 4++ and 5 which it knows it needs in order to balance against Israel, Turkey and the GCC. Here Iran is gauging China and Russia to see what it can get from each one of them, yet again sharing the cake so both are happy. Furthermore Iran needs to buy 6-12 submarines of heavy class during the coming decade and it needs help to either buy them or do joint venture, again Iran is gauging Russia and China to see what it can get. As per both China and Russia, Iran is also looking for civil aviation products and joint ventures as well. Once again here, the US and Europe are so slow to move that I am convinced these new giants will challenge their share in Iran.
As per Iran's market in general, China is already eating it up...from car industry to shoes and clothes and the Chinese penetration is at an advanced level so when it comes to the rest of the market they are in much better shape than for example the Japanese.
Besides these, I think both China and Japan are trying to get into other areas as well such as bank, finance and most importantly insurance. But here Iran is very cautious as per the time of sanctions these players were very quick to freeze Iranian assets and when it comes to insurance Iran normally looks to the West, most probably Germany, UK, Spain and France.
As per Iran's consumer electronics and appliances, South Koreans with Samsung and LG have super dominant positions and they will not let the other players to easily enter in a cost effective way. Their brand is recognized everywhere in Iran and they have a strong network of re sellers and post sales support teams.

Interesting fact: Many Chinese named "Ma" are ethnic Han Chinese Muslims (also known as "Hui", as opposed to ethnic Turkic Uygur Muslims who live in the Chinese West). Apparently "Ma" is a transliteration of the name "Muhammad". That being said, I have absolutely no evidence that the Chinese Air Force general above is Muslim. Just thought it was a fun fact.

Why are the Iranian air force officers in civilian clothes? and they also look like shabby bazaaris! no wonder no one takes them seriously. Just look at the officers from the Shah's era.