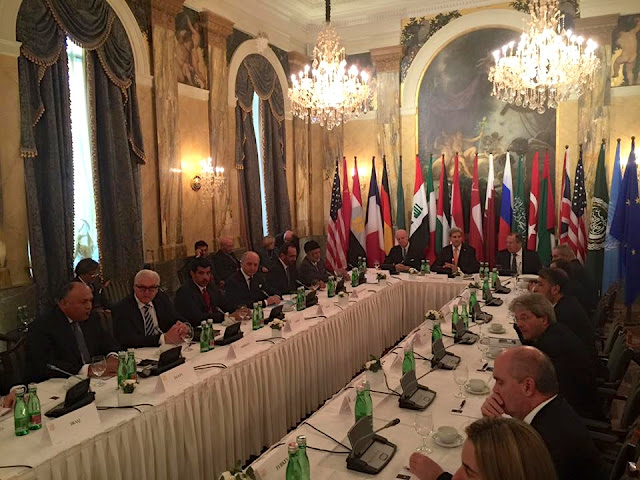 UPDATE: Members of International Syria Support Group (ISSG) expressed a unanimous sense of urgency to end the Syrian conflict. They reiterated their support for a Syrian political transition based on 2012 Geneva Communiqué in its entirety.

ISSG members further agreed to implement a nationwide ceasefire in Syria as soon as representatives of Syrian government and the opposition have begun initial steps toward transition under UN auspices. The permanent members (P5) of the UN Security Council also agreed to support a UNSC resolution to empower a UN-endorsed ceasefire monitoring mission and to support a political transition process in accordance with the Geneva Communiqué.

ISSG agreed on the need to convene Syrian government and opposition representatives in formal negotiations under UN auspices, as soon as possible, with a target date of January 1.

It was also agreed that all parties to the political process should adhere to fundamental principles of Syria’s unity, independence, territorial integrity, and non-sectarian character; to ensure that State institutions remain intact; and to protecting the rights of all Syrians, regardless of ethnicity or religious denomination.

ISSG will reconvene in a month.

The meeting of the International Syria Support Group (ISSG) resumed in Vienna today, as the foreign ministers participating in negotiations set aside their differences at least temporarily and condemned Paris attacks. Secretary of State John Kerry, standing next to the Russian Foreign Minister Sergey Lavrov, said the Islamic State’s terrorist attacks “encouraged us today to do even harder work to make progress and to help resolve the crises that we face.” Lavrov added, “No justification for terrorist acts, and no justification for us not doing much more to defeat ISIL and al-Nusra and the like. I hope this meeting as well would allow us to move forward.” (Reurers, 14 November)

Iranian Foreign Minister Javad Zarif, who did not plan to attend today’s talks, and instead were to accompany President Rouhani on a visit to Rome and Paris, changed his schedule after Rouhani’s visits were postponed after Paris attacks, and has now left Tehran for Vienna to attend the afternoon session of the talks.

The part about secularism alone is enough reason for Islamist groups to reject the agreement. Now, we know Iran and Russia can pressure Assad into accepting something like a nationwide ceasefire. Iran has already been negotiating with the Army of Fateh on Assad's behalf before Russia's intervention. But seriously, who do they think can make al-Nusra and its affiliates implement a ceasefire which they might not even approve of? Saudi and Turkey? I don't think they have that much influence on the rebels.

What's it gonna look like when a brutal, mass-murdering dictator like Assad abides by the agreement but the rebels ultimately fail to? I'm really not being rhetorical, it's just that supporting these groups is one thing, and forcing an agreement upon them which they don't like, another.

What about terrorism? Did they even agree who's a terrorist and who's not in such short time? Is the FSA gonna have to fight al-Nusra like it's fighting ISIS?

The Syrian conflict is complicated and full of ironies. The country has practically disintegrated, with the regime and warlord-type forces controlling different parts of what used to be Syria. Putting this broken puzzle back together is a monumental task, and I wish all who will try doing it best of luck, as they need it, and as it seems impractical. At best, what we might get for the time being could be a de facto partition of the country into a smaller Syria, ruled by supporters of the current regime and the moderate opposition, and significant territories to the east ruled by ISIL and Nusra and their allies. It would take global unity and determination for years to come to get rid of the extremists, in Syria and as importantly in Iraq, enshaallah!

I'm no fan of Assad but don't you believe he's at least a temporary solution to terrorism?

Assad is not only the solution ,but He stands as the bridge connecting Syria's past and future!.

Anyone one wishing a political solution without Him in the current circumstances is just joking and running away from reality!.