‘This Was a Terrorist Act’ 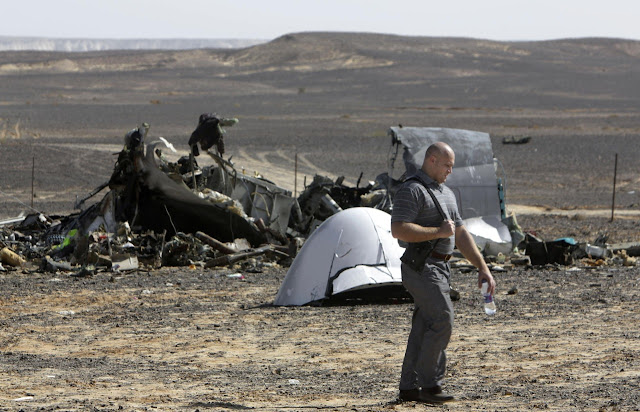 “According to our experts, a homemade explosive device equivalent to 1 kilogram of TNT went off onboard, which caused the plane to break up in the air, explaining why the fuselage was scattered over such a large territory. I can certainly say that this was a terrorist act,” Bortnikov said. (AP, 17 November)

The Islamic State has claimed responsibility for downing the Russian plane in written statements, as well as video and audio messages posted on the Internet following the 31 October crash that killed all 224 people onboard. ISIL said the attack was retaliation against Russia’s air campaign the organization in Syria.

Meanwhile, Russian President Putin vowed to hunt down those responsible for the terrorist attack and punish them. Putin added that the air campaign in Syria “should not only be continued but should be intensified.” He instructed the Defense Ministry and General Staff to present their plans on how Russia’s operation in Syria could be modified.

“We will act in accordance to the UN Charter Article 51, which gives each country the right to self-defense,” Putin said. (AP, 17 November)

UPDATE: Russia conducted several strikes in Raqqa on Tuesday. Fox News quoting a defense official in the region said the strikes included cruise missiles and possibly long-range bombers. The assault on ISIL’s capital in Syria came hours after Russia confirmed that a bomb brought down a Russian passenger jet in Sinai. ISIL has taken responsibility for bringing down Metrojet 9268 on 31 October.