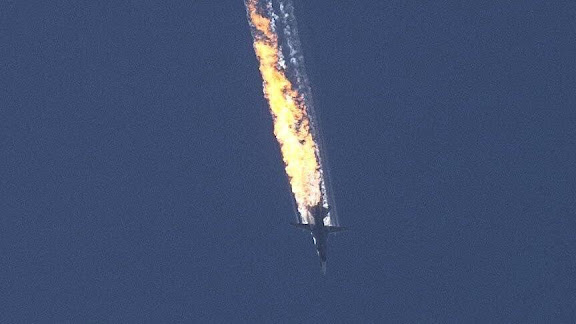 
Turkish fighter jets shot down a Russian-made warplane near the Syrian border on Tuesday after repeatedly warning it over air space violations, Turkish officials said, but Moscow said it could prove the jet had not left Syrian air space.

Turkish presidential sources said the warplane was a Russian-made SU-24. The Turkish military, which did not confirm the plane's origin, said it had been warned 10 times in the space of five minutes about violating Turkish airspace.

Russia's defence ministry said one of its fighter jets had been downed in Syria, apparently after coming under fire from the ground, but said it could prove the plane was over Syria for the duration of its flight, Interfax news agency reported.

According to Russia Today News:


A Russian Su-24 fighter has been shot down in Syria, the Russian Defense Ministry said, adding the plane hadn’t violated Turkish airspace and was flying at an altitude of 6,000 meters.

“During the flight, the aircraft was flying within the borders of Syria, which was registered by objective monitoring data,” the ministry said, adding that the aircraft was "supposedly shot down from the ground.”

COMMENTARY: This is the first time a NATO member armed forces has downed a Russian or Soviet military aircraft since the 1950s.

This action by the Turkish military could be interpreted by the Russo-Iranian led coalition as rendering support for armed opposition forces, against Russian military forces engaged in supporting current Syrian pro-government offensive at northern Latakia Governorate. [see military situation map at bottom of post]

Russian and Turkish assets fell on fears of an escalation between these two countries that have seen periods of hostility and open warfare during the previous five centuries. 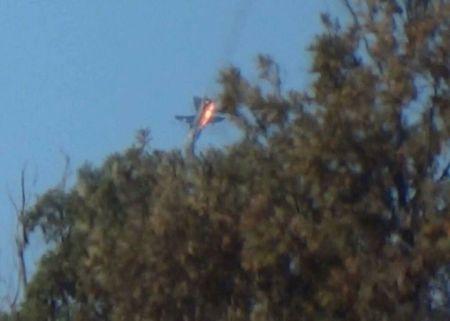 RuAF Sukhoi Su-24 "Fencer" attack aircraft falling to earth upon Turkmen Mountain, in the north of Latakia region of Syria 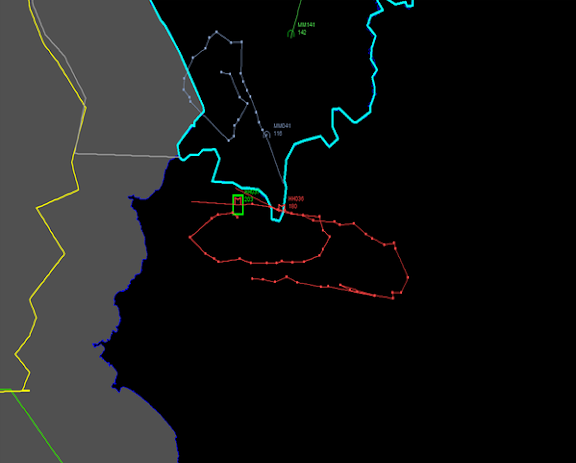 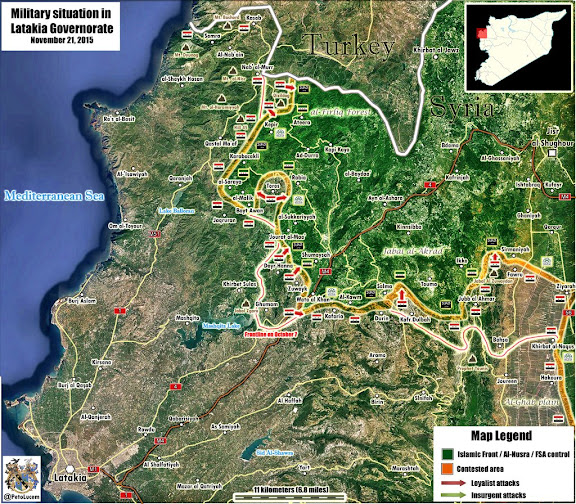 Russia needs to deploy S-400 near the Turkish border as Turkey's pet terrorists are getting whacked by SAA as it secures the border. One of the pilots is captured and the other may have been killed. This is truly disgusting as Russia is fighting a noble war for human civilization and the SU-24 was inside Syrian airspace.

Turkey claims the Russian pilot was 10 times warned that he was in Turkish airspace before the Russian plane was fired upon..... so the Russians are gonna have to interpret THAT. the Iranians of course have nothing to do with this and no one cares about their opinion.

" Turkish General Staff released the radar trace analysis of the Russian jet. The analysis shows the plane entered the Turkish airspace over the southern province of Hatay while circling over northern Syria. "

The affairs in Levant can be best described as a complete " Fluster Muck " .

Even if the Russian bomber had violated Turkish air space for a brief moment, it was shot above Syrian air space and was downed in Syrian air space. There is a video in the web showing two Russian pilots coming down on their parachutes while Turkish speaking rebels firing on them in the air. Most probable pilots were alive after ejection and at least one of them has been slain by the Turkmen rebels. Turks has been done this on purpose. Their support for the most notorious terror groups is obvious for every one. Now we should wait and see what will be Putin's response to Erdogan. I hope it will be a bone crushing one paid by the rebels on the ground.

Now Russia will not avoid airstrikes on rebels, who get support from Turkey and NATO, located at the Turkish border and close to Idlib, Latakia areas, and Russia will treat any incursions by western forces on Syrian land the same way.....
Cruiser Moskva, with the S-300 Fort onboard, has got appropriate authorizations.

Russia's next move will be interesting. Will we see the Syrian government declare any Turkish aircraft detected in its airspace considered hostile? Could we even see the SyAAF air base within Kurdish held Syria re-opened to the Syrian Govt or possibly Russian aircraft. Unlikely. But I bet they could make an offer of air defence against Turkish planes bombing Kurds, whilst pretending to be bombing terrorists, that the yanks couldn't. Interesting few days ahead.

Clearly this has happened because Turkmen were being bombed. Right on the Border. Very aggressive by the regime and Russia. However I can't help but wonder if this is also a sign of the Turks frustration at "redoubling our efforts", 'expanding our campaign", 'rebombing bits of rubble we've bombed several times already' they are hearing from France and the US. Errrrgoddam may be trying to drag Nato into a crises he thinks he can control. He just needs to try and be as rational as the Russians and Obama are right now. Test things this will! Gift the Russians it may. Turkmen on both sides of the border should be closing their border. Finding and slaughtering IS fighters. With a kangaroo court and a female executioner! Let the promising peace talks continue and let all the Turkmen carve out their cantons. Try and influence its halfwit patron in Ankara to join the Kurds, Alawites, Christians, FSA and even former Salafist backed Islamists to bring some peace to this country.

Russia is under attack:
1. Its passenger jet with 200 passengers downed by a bomb from Egypt to Russia
2. Its Su-24 fighter jet downed in Turkey
3. Its helicopter downed in Syria (most probably the one who was looking for pilots, not confirmed)
4. One marine in the pilot rescue team killed in action (confirmed)

This means Putin is pushed into a corner and he doesn't like that...his reaction will be swift and direct but calculated on timing to get the maximum media effect and re-establish his global status...so one thing is sure...his will retaliate.

that radar trace analysis is doctored !!TRUST the Russians they know what the are saying!!-As usual Turkey is a weak Nation that has no place in Europe. YOU don't just shoot a foreign jet like that !.

Russia is a "has been" with very few options at its disposal. I doubt she has the wherewithal to take on NATO at this juncture in its history. Yeah, it's still a power, but not a significant one.

no, a Russian nation under the thumb of a KGB thug named Putin is not to be trusted at all.

the day before the jet was shot down, the Turkish government formally conveyed a warning to the Russians that Russian military aircraft were violating Turkish airspace and that the Russians were unwelcome and must stay out.

Russia ignored this and the Turks responded, as is their sovereign right.

your comment is silly. saying that Turkey has no place in Europe makes no more sense than saying Russia has not place.

Well maybe, but at least it still remains more relevant internationally and even more so regionally than Turkey itself in that regard. Such impulsive and irrational act by Erdogan only hints further at his anger of witnessing his powerlessness towards achieving his long-sought goal of annexing bordering parts of Syria under the guise of a security buffer and openly undercutting Syrian Kurds in the process. What exactly he wanted to achieve militarily by downing a single isolated bomber is unclear so far, considering it is most likely going to be the last time ever that Turkey can take on Russian assets by surprise without consequences. If in doubt ask the Moskva crew and the few batteries of deadly and feared S-400 on their way to offer overlapping coverage of most Southern Turkey all the way to Incirlik air-force base. Not to mention Su-30s providing close fighter escort from now on. A Su-24 attacked from its rear blind-spots totally unprepared for an IR-homing missile is one thing, taking on interceptors head-on, absolutely ready for hostile maneuvering and equipped with top-notch air-to-air missile is another altogether for Turkish F-16 patrols. Reports are plenty about Russian strikes getting tripled since the last 12 hours. It is not going to be long before Turkish-affiliated forces in the area are wiped out and/or forced to retreat to their home base in Turkey. Erdogan made an impression that soon turned to be a miscalculation with lasting consequences. He can kiss his no-fly zone goodbye as well for starters.

S-400 now cover all of Syria and Turkey is for major turbulence. Erdogan's desperate gamble backfired and now Russia will support President Assad till the cows come home.

Assad will be dead long before the cows come home. as it is, the Assad dictatorship has been broken and never again will control Syria.

Could it be that Turkey and other countries are ruled by a group of idiots ?
Better to spin off the Syrian Turkomen enclave itowards Turkey in exchange for Turkish cooperation. in closing its border to jihadi traffic and trade .

Turkey claims that it warned "ten times" DURING 5 MINUTES PERIOD, but the time to fly over Turkish pocket of land requires 17 seconds only.......for warplane such as SU-24....

Those numbers cited by Turkey don't sum up in a logical way...

The Russian plane went down inside Syria. It's hard to believe claims from Turkey, the same country that has been supplying arms to IS, trading oil with them and treating their wounded in its hospitals.

The Islamist extremist groups and their foreign backers have been assuring the world of that for years. They sound like Baghdad Bob, the Iraqi information minister when Iraq was invaded in 2003.