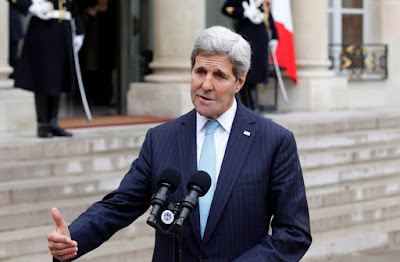 Secretary of State John Kerry said today in Paris that a ceasefire between Syrian government and opposition could be just weeks away from reality. He told reporters that the ceasefire envisioned by the political process agreed upon in Vienna on Saturday would exponentially help efforts to fight the Islamic State.

“That’s a gigantic step,” Kerry said. “If we can get that done, that opens up the aperture for a whole bunch of things. We’re weeks away conceivably from the possibility of a big transition in Syria… We are not talking about months, we are talking about weeks hopefully.” (AP, 17 November)

Meanwhile, Saudi Arabia will host a meeting of Syrian opposition by mid-December, at which they are to agree on a delegation to send to talks with representatives from Assad’s government. Once those negotiations begin, a ceasefire is to take effect, according to the agreement reached in Syria talks in Vienna on Saturday.

Photo: Secretary of State John Kerry in Paris (Chesnot/Getty Images/AP)
Posted by Nader Uskowi at 11:30 AM

They'll be coming to Riyadh, please let us know!

Heres an article anyone who supports the so called "moderates" should read,its an eye opener
http://www.nytimes.com/2014/10/28/magazine/theo-padnos-american-journalist-on-being-kidnapped-tortured-and-released-in-syria.html?_r=1

where in this world is the UN !