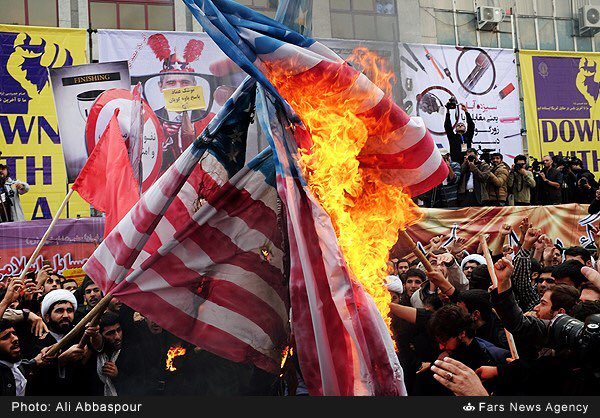 Thousands of Iranians today rallied to celebrate the anniversary of the 1979 hostage-taking at the U.S. embassy in Tehran, as hardliners warned against the “infiltration” of the country by the American and Western supporters, and chanted “Death to America.”

The U.S. embassy was sacked by hardliners in early days of the Islamic Revolution in 1979. The ensuing U.S. hostage crisis lasted 444 days and Washington and Tehran have yet to restore diplomatic ties.

Iran’s Supreme Leader Ayatollah Ali Khamenei in a speech yesterday marking the anniversary of embassy takeover and hostage-taking warned the Iranians against trusting the United States in the aftermath of the historic nuclear reached earlier this year. Khamenei also warned against improving and normalizing relations with the U.S. On the streets, some protesters dragged a coffin marked “Obama.” He situation in Iran

“Western countries, especially the United States are trying to take advantage of the situation in Iran after the nuclear deal to normalize relations with Tehran and infiltrate the country,” said IRGC in a statement marking the occasion. (Fars News Agency, 3 November)

Why show this mob and not the demonstrations around Cyrus the Greats tomb by free thinking Iranians when they chanted,"We are arians and don't worship arabs" and "Iran is our soul and Cyrus is our father"? Looks like the Akhoonds have failed miserably in trying to convert Iran into omatistan. The hired mob above will no doubt receive their daily sundise as usual.

Dear Anon, your extreme right-wing brand of Persian xenophobic nationalism is an ideology that belongs in the dustbin of history along with fascism and nazism. Please do not pollute these pages with your diatribes

@swakil.....No it doesn't. Just go and see some pictures of Hezbollah in Lebanon wearing black uniforms and giving the nazi type salute.You don't know nothing of persian nationislm because if you did you wouldn't be aimimg your diatribes at me. Go and tell those young Iranians in Iran that persian nationalism "belongs in the dustbin of history".What I can confidently tell you is that Islamic ideology and its politics in Iran belongs in the dustbin of history.We will win.

There are no doubt other xenophobes with racist thoughts such as yourself in Iran. I know. I grew up there. Fortunately, you represent a small proportion of the population. You are no different than the far-right xenophobes in England, the EDL, or the front national in France, or the Golden Dawn in Greece. What all of you have in common is that you take all your frustrations about the economy and politics, some of them well-founded mind you, and blame it all on some "other". In your case, it happens to be Arabs. Every single one of your posts mentions ethnicity and tries to define Iranians in opposition to Arabs. This is an extremely uneducated and simplistic view. Anyone with even a cursory knowledge of Iran knows that it is a multiethnic remains of an empire rather than a homogenous nation-state. Iranians are Persian, Turkish, Arab, Baluch, Kurd, Lori, Bakhtiari and other ethnicities as well. Many of the dynasties in Iranian history were Turkic in origin. The "Persian culture" that you know today would have been completely unrecognizable, as the modern Persian language itself, to pre-islamic Persians in Achamenid times. This is because, like all middle eastern cultures, Iranian culture has interacted, mixed and adopted many elements from Turkish, Arab, Mongol, Greek and Roman cultures. Your view of the world is too narrow to even understand these facts, so I'm gonna stop wasting my breath trying to educate you.

@swakil......Do you even know what extremism really looks like? For a clue look at the Islamic regime in their way of thinking and their barbaric actions against the Iranian people.The regime is imprisoning torturing,raping and killing every single day of the week.Then you claim that persian nationalism is extremist.The records show that the Islamic regime is the far right extremist one and Islamism in general is the most extremist and fascistic in its ideology.The Iranian people have felt this islamic ideology for the past 37 years and they know that it is rotten to its core.

You are letting your hatred for the current Iranian political system cloud your judgment. You start with hatred of the politicians, then generalize it to all clerics, then to the whole ancient and honourable religion of Islam, and then to all Arab Islamic culture. You need to get a grip on yourself. There is more to life than hate.

The shah's corrupt dictatorial regime was certainly no better, anon. He was a weak western puppet that sold the honor of his nation to the americans and Zionists many times. That's why the overwhelming majority of the country led a revolution and threw him out like a rat.

Iran has an 2574 year ancient and honourable culture.Not the 1400 year imposed ideology of the arabian desert.

Nothing in Iranian history is worse than the gangsters that are occupying todays Iran.

Unfortunately for you, reality does not conform to your narrow bigoted opinions. It is possible to both be a believing Muslim and a proud Iranian for example. And not all Muslim Shia clerics are supporters of the Islamic republic. And 99% of Iranians profess the Islamic faith. But these facts do not conform to your simplistic conceptions of Iran as a pure land of white blue-eyed Aryans, different in every way from the dark skinned "desert dwellers" that have been their neighbours and with whom they have interacted for millenia. Again, unfortunately for you, your ideas are nothing more than racist ethnic supremacist fantasy.

Oh really Anon jan? I guess you are immortal then and were alive during the Mongol invasions when they plundered, raped and killed every inhabitant of the capital and built a tower out of their skulls? Or how about after the Greeks led by Alexander destroyed your beloved Achaemenid empire and looted all of Iran's riches and enslaved her women? Alive then too. Cause you must have been in order to make a fair comparison.


You just proved that you know nothing of Iranian nationalism when you mentioned "pure land of white blue-eyed Aryans". You are confused with Nazism of the thired reich instead of the force of good that unites all peoples in Iran zamin.It's very easy to call others "racist" when you yourself are confused by comparing the two.Whether you like it or not Islam as a political and moral force has been bankrupted by the Akhoonds in Iran. 99% of British are christians,doesn't mean the church should rule the country with hired "religious" armed thugs like what is happening in Iran. Iranian people have learned that religion and politics don't mix.Something that unfortunately you seem to have not grasped yet.

No, my friend, it is you who have exposed the shallowness of your ideology with empty words such as "goodness that unites all Iran's peoples". Does that goodness also extend to the ethnic Iranian arabs of Khuzestan, many of whom have proudly defended their country and been martyred in the jang e tahmili? I call you a racist not because you support Nazism, because you discriminate against Arabs and non-Persian Iranians and their religion in every one of your hate-filled posts. Your version of Persian nationalism is much closer to fascism and Nazism than you'll ever admit.

We don't "discrminate against Arabs" as you would like us too.We discriminate against the backward and savage ideology of Islamic fundamentalism that has bankrupted our society into political economic and above all social decline. Iranians can see thru the whole rotten infrastructure of political Islam.So please don't try too hard convincing yourself and others that we hate arabs by playing the "racist" card here.

Yes swakil jan. The Islamic regime has lead to the bankruptcy of the faith the majority of people once believed in.The very people that lead the IRI are supposed to be Iranian but unfortunately have shown their disdain towards Iran and Iranian.There isn't a day that goes by that your beloved Islamic regime is executing a dozen people,torturing and raping or looting the nations wealth to put into private bank accounts or giving it away to Syria Lebanon or some other arab cause which have no relevance for the people of Iran.Therefore these so called Iranians are far worse than the Mongels and Alexander who were foreigners.

It was the Achaemenids that created the nation of Iran.If it wasn't for them there would be no Iran today.By simply stating your opinion regarding this issue you have exposed your total disdain towards Iran. But at the same time break a sweat trying to praise a system like Islamic ideology that is the enemy of Iran who tried to destroy the very country you claim to concern yourself with.