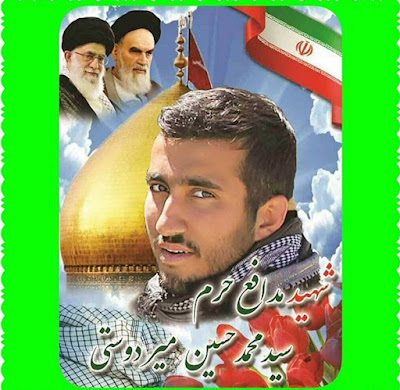 On Saturday, it was reported that IRGC serviceman Mohammad Hossein Mirdusti was killed in Syria. The latest report brings the number of known IRGC KIAs in Syria in the month of October to 32, including three general officers and three full colonels. (Twitter/@dudi_cohen)

This monthly Iranian casualty figure during the Syrian conflict would actually be considered light when compared to American figures during the Iraq War, where American ground troops were actively engaged in counter-insurgency operations.

For a comparison, see:

Not that I'm in any way minimizing casualties experienced by either American or Iranian military forces, nor am I in any way comparing the combat capabilities of the two respective armed forces. It's just that so much is being made of the Iranian casualty figures, particularly in the Western press, that a sense of perspective should be provided, IMO.

The Iranian military says it has only advisory role in Syria and it's not involved in combat mission. In October, the Iranian casualties spiked to 32, exponentially higher than its monthly casualties during its previous 4.5 years of military involvement in Syria. That's significant news.

Iraq War was a combat mission and not comparable to Iran's advisory role in Syria, that's why 32 Iranian KIAs in one month is so huge. You can of course argue that these high casualties are manifestation of a change in Iran's role from advisory to direct ground operation, which is also as newsworthy. That's the perspective that needs to be provided, IMO.

I don't know how big is a Iranian battalion but let's say it's 500 troops, 30 to 34 losses is 6 to 7%, that's not insignificant. If Iran sustains that level for a few months, you have a significant loss in leadership and probably start having a moral problem.