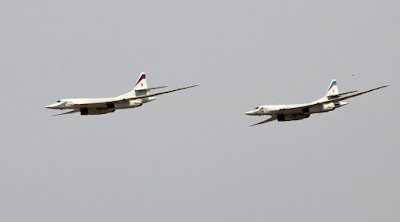 The Russian Defense Ministry has released a video of its strategic bombers conducting their first airstrikes in Syria on Tuesday. RT reports that groups of Tupolev Tu-95 (Bear), Tu-22 (Blinder) and Tu-160 (Blackjack) long-range bombers took off from Russian airfields and returned to base after striking their targets in Syria. Russia also launched cruise missiles against the targets.

Russian Defense Minister Sergey Shoigu said that the involvement of its fleet of 25 strategic bombers will allow Moscow to double the number of airstrikes in Syria. Up to now, the sorties were carried out by Sukhoi Su-25, Su-24 and the new Su-34. (RT, 17 Novemver)

Not unlike (of course a much shorter distance involved) when B-52's from Barksdale flew to bomb in Desert Storm and returned to their base in one long non-stop bombing raid.

YES they did a 'wonderful' bombing campaign on non existing weapon of mass destruction sites and deports !.

only a Nation that enjoys impunity because it hosts the UN in the whole world can do that!.

True. And many many more sorties over the last 24 years. USAF does have to travel a lot further to meddle and create mayhem in the middle east than other powers. Somehow a not so uni-polar world isn't as scary as it was a few days ago. There's already talk of peace for Syria. Plenty of blood letting to go sadly, yet with Russia, a nominally socialist led France taking the lead, the Anglophile lead Status Quo may finally be coming to an end in regards to Syria.

Russian "White Swan" strategic bombers on the attack against ISIL!

Makes one wonder if all of a sudden everybody is sharing intelligence, or, collateral damage threshold has broadened? Meaning seems to be a whole lot more stuff to bomb in Daesch and Al Nusra...... held Syria at the moment? I hope the Americans can understand that the world will not tolerate having to clean up Texan.... Christian aggression's again. I think Obama does. I think the time is right and probably overdue, for joint operations. Between Russia, US, EU-Turkish and local allies to get their heads right. With their assets they could extinguish ISIS/ISIL/Daesch in months. 50,000 Foreigners V 35,000 Foreigners racing around the desert, some in hilux's and some in helicopters. I'm seeing Bagdadi a foot note of a lost war in the history of Chechnya and Syria. A Chechnya and Syria that still exists, just fine without the ideology and gold that flows from the house of Saud. Let the call of duty westerners and grand theft auto westerners get it on! And then, let the real hard work begin. And as per usual, that will be done by the lucky, would be collateral damage, majority, survivors.

No nation in history of military aviation since 1911 has won a war by bombing alone. The Daesh area of terrorism is desert larger than Texas and firing 20 million Rouble KH-55 will not do much. Only major boots on the ground and sustained land campaign reclaiming village by village is the only hope. France should put its money where its mouth is and put a couple of divisions in western Iraq and eastern Syria and go for Raqaa and Mosul. Bombing poor Arab civilians is quite sad and counter-productive as IS is cowardly terrorists who hide in homes, schools and hospitals.

Excellent point by B.M.A. in reply to very 'knowledgeable' Iddon.

Well, instead to 'waste' KH-55 in exercises it is better to utilize and test them against real targets.....

The Turks need to decide what they are doing here. The Borders need to be slammed shut on these ISIS foreigners. France has spent the last few years in MALI and other west African countries fighting and directing a massive anti insurgency operation. A less intensive conflict perhaps but carried out over an enormous area and involving air mobile special forces. Frances problem is it can not spare as many of those forces as she may like. This battle does not need to be fought village by village. It would be a battle of maneuver. Isolate, surround, Kill. Would mean lots of helicopters. Would mean some helicopters getting shot down. If other countries, like Russia and France, especially the US and Turkey can accept casualties, and a coherent plan, maybe these RATS can be cornered and exterminated.

Why must it always degenerate into a pissing contest over who's war machines are better than who's? BTW is the SR-71 still flying? As for B2, pretty sure they not invisible to the Russians anymore, and they may want to share the info with allies who have capabilities to bring it down with a little intel? As the Serbs did with a flight plan they got off a french Nato officer during the 99' Kosovo war. More relevant perhaps would be availability of X-47 and F-22?