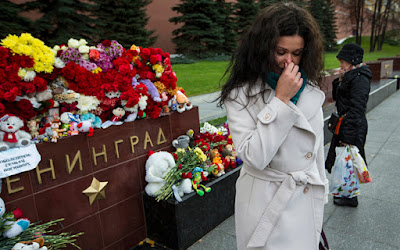 Russian investigators have concluded that the Metrojet airliner that crashed on Saturday in Sinai had broken up in mid-air before crashing. The investigation also shows that the bodies of the passengers seated in the rear of the aircraft showed 90 percent burn, France24 reported. Both findings are consistent with a powerful mid-air explosion in the rear of the plane when it reached cruising altitude, causing fire that led to the severe burns and breaking up of the plane under the force of explosion.

Russia’s Interfax also reported that a cockpit recorder had picked up sounds of chaos in Metrojet 9268's final moments.

“Judging by the recording, a situation onboard developed suddenly and unexpectedly for the crew, and as a result the pilots did not manage to send a distress signal,” Interfax quoted an official familiar with the investigation. (Interfax/The Telegraph, 3 November)

Soon after the crash, the Islamic State in Sinai, the Egyptian affiliate of ISIL, took responsibility in the social media for bringing down the plane, which killed all 224 people aboard. In the past, ISIL has never taken responsibility for a terrorist act it did not commit, and its current claim should be taken seriously. If true, this could be Russia’s version of 9/11, with terrorists using aircraft to cause mass casualties.

Forensic experts will readily determine whether or not explosive residue is present, indicative of a bomb.

The ISIL video purporting a missile strike appears bogus, and MANPADS will not reach the cruising altitude the aircraft had attained.

Definitely no missiles involved, as ISIL MANPADs do not reach 22,000 feet altitude. The Telegraph today quotes U.S. intelligence sources as saying the satellites had detected a mid-air flash as the aircraft went down, but were able to rule out a missile strike because there was no tell-tale trail coming from the ground.

The mid-air explosion could have been caused by technical problems, like the explosion of a fuel tank. But also by an explosive device onboard. I am sure the investigators will figure out how the fire that inflicted such severe burns on the passengers seated in the rear of aircraft started. We should know that within a few days.

I also have not seen any video purporting a missile attack on ISIL's known social media outlets. What they have published so far is a statement by Islamic State Sinai Province on the news site associated by ISIL saying they were responsible for bringing the plane down, without saying how. What I said in the post was that ISIL has so far not taken responsibility for any terrorist act it did not commit, and we should take their latest claim seriously.