Another way to assess Iran's support of Assad 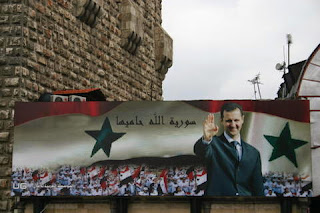 Many detractors of former U.S. President Jimmy Carter lambaste him for leaving a former ally of the United States, the last Shah of Iran Mohammed Reza Pahlavi, fly around the world in exile without a country in which to take refuge. As Ronald Reagan put it during the 1980 presidential campaign, the Shah was a “stalwart ally” of the United States in that region and did its “bidding” there. Not assisting him or giving him refuge when he went into exile Reagan believed was “a blot” on America's record.

When the Shah died in 1981 former U.S. President Richard Nixon, a friend of the Shah, attended his funeral in Cairo wherein he called the Shah's treatment by the U.S. in exile as “shameful”, since it had “turned its back on one of its friends.” He too believed it had been a mistake not to assist that former American ally. After all, the Shah was an autocrat who he had helped elevate to be become a major regional power during his presidency as part of his administration's Nixon Doctrine.

Both these now deceased former American presidents voiced their view that even after the Shah had fallen the U.S. should not of snubbed him after he having had, in Reagan's words, “carried our load” for so long in the region they believed it was only right that they stand by their friend and ally until the end.

I'm often reminded of that episode of history when I see the lengths to which the current regime in Iran is going to prop-up the regime in Syria of President Bashar al-Assad. Yes, Assad is a strategically important ally and his fall would undermine Iran's strategic interests in the region vis-a-vis Hezbollah in Lebanon. But at the same time there is a much more personal component to the support Damascus has been receiving from Tehran given the fact that it was the Assad regime in Syria which had given decisive assistance to Iran during its brutal eight-year war with Saddam Hussein's Iraq.

The fostering of the Tehran-Damascus alliance came at a time when the help Iran got from the outside world during that war was extremely limited. Even after Iraq began to use chemical weapons on the battlefield. Many in the Iranian regimes Islamic Revolutionary Guard Corps (IRGC) paramilitary still remember the help Syria gave them at a crucial and critical time for them shortly after their inception and see their support of the Assad regime today as one way to repay that support. Which is one reason why IRGC forces are also being sent to Syria to ensure Damascus and the remaining parts of the country Assad still retains remain under his control -- and possibly even to help him undertake an offensive aimed at retaking Idlib Province.

As the Shah had held the fort for Washington for so long in the Persian Gulf region so too did Assad for Iran in the Levant. And many in the establishment in Iran feel that another reason Assad should be supported when his rule is being directly threatened.

The comparison is obviously highly imperfect in many respects. After all, there have been weeks in Syria in the last four years whereby the Assad regime killed and tortured to death more people than the last Shah did during the entirety of his lengthy 38-year reign. Additionally, the last Shah did not authorize the bombing of his own country's cities like Assad did. And while the primary reason Tehran has sacrificed blood and treasure in keeping Assad in power is indeed strategic there is also that more personal component to this support which shouldn't be readily forgotten. Assad may well be a mass-murdering bastard, but it's worth remembering that from Tehran's point-of-view he is – as was Somoza to Washington once-upon-a-time – their bastard.
Posted by Paul Iddon at 12:00 PM

Any comparison between Pahlavi dynasty rule in Iran and Syria's regime conduct is utterly false .The conflict in Syria has degenerated into a fight between evil and really evil with millions of innocent civilians suffering unspeakable conditions .
Iran's strategic interest in Syria is not the survival of Assad's regime per se , but preventing a takfiri take over or taking hold in any parts of Syria as such .Given the combined effort and support of Turkey , Saudi Arabia and UAE for the takfiri savage terrorists , Iran's efforts have been paltry and inadequate so far .
I think Iran made a strategic blunder by not using whatever influence it had to moderate the Syrian regime conduct in the conflict , however keep in mind that Iran isn't known for exercising shrewd foreign policy in accordance with international law or in line with its national interests .

Don't forget, Paul, there exists a mutual defense pact between the Islamic Republic of Iran and Syrian Arab Republic, of which the current Syrian president's government remains recognized by the UN.

No such defense pact existed between the U.S. and Islamic Republic of Iran during the deposed shah's final years, a figure deposed by perhaps the nearest total social spectrum of any revolution in history.

Syria is an absolute mess and it did not have to be that way. Just as Iranians let in foriegners with islamic idiology Free Syrian army let foriegn forces with islamist and jahadist idiology to fight alongside them against other Syrians and the hatred of Asad blinded them to the dangers of islamism. They had numerous opportunity for peace but chose war. Now DAesh and alnusra front are really in charge. Recognising this Iran did not get involved If Iran was seriously involved with millions if basijis in Iraq or Syria it would have been over by now. At massive human cost.