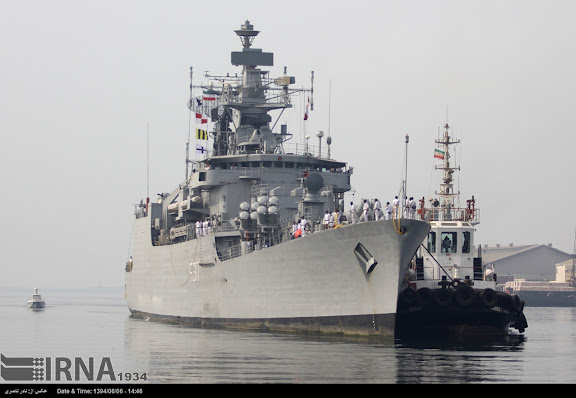 During May–July 2009, INS Beas was a part of the Indian Navy task force on deployment to Europe. During this deployment, the task force participated in joint-exercises with the Royal Navy and the French Navy. Exercise Konkan-09 with the Royal Navy, was conducted off the coast of the United Kingdom. Exercise Varuna 2009 with the French Navy was off the coast of France. [source: Wikipedia] 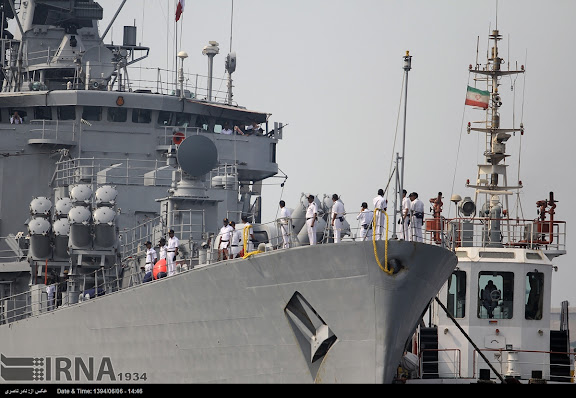 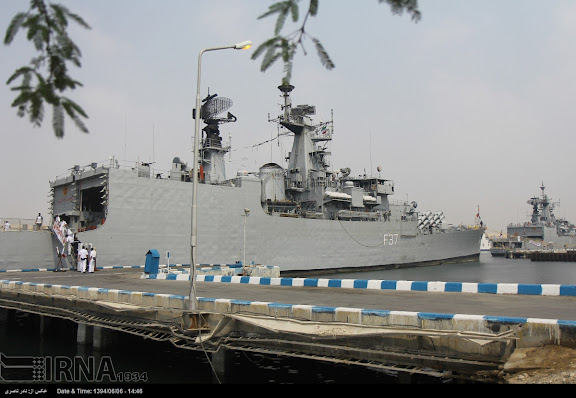 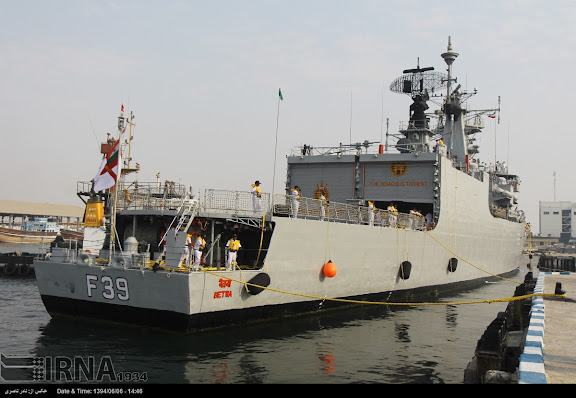 INS Betwa notable actions include Operation Cactus, where the Indian Navy was called in to rescue the Maldivian hostages taken by Sri Lankan mercenaries off the coast of Sri Lanka. INS Godavari (F20) and INS Betwa captured the freighter, rescued the hostages and arrested the mercenaries near the Sri Lankan coast.

INS Betwa was also part of Task Force 54, returning from the Mediterranean during which time the 2006 Lebanon War broke out. As a part of Operation Sukoon, INS Betwa participated in the evacuation of Indian citizens from Lebanon to Cyprus. 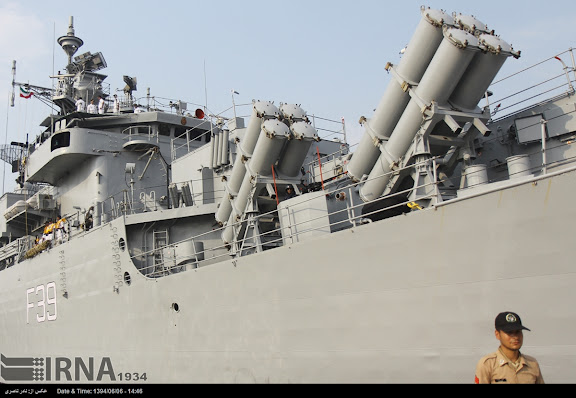 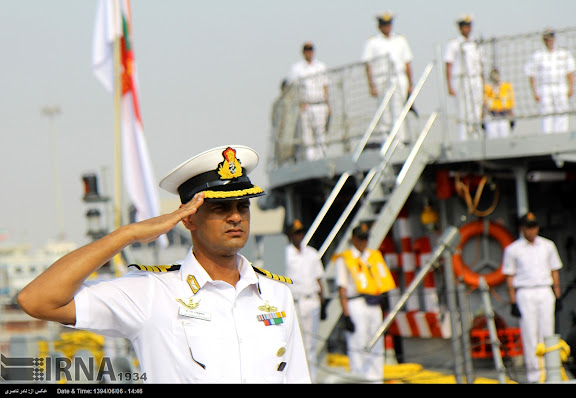 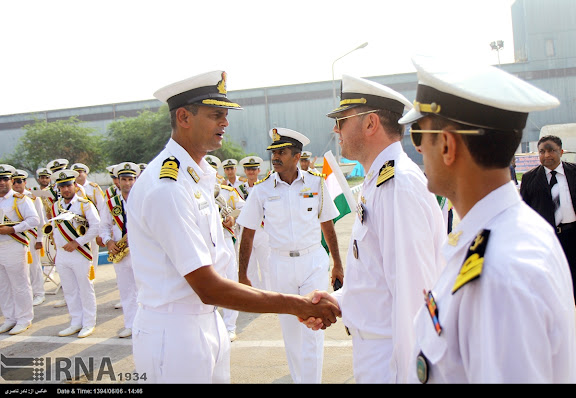 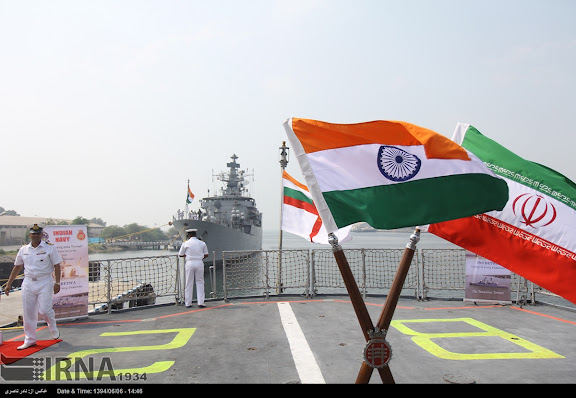 Crossed flags of the Republic of India and Islamic Republic of Iran, and behind them Naval Ensign of the Indian Navy, seen at the stern of INS Betwa.

Now these are real well armed frigates and well maintained, not like the antique Vospers from the Shah's era. Iran should be buying mothballed Russian warships and upgrading them. Indian navy will the one of three bigger and most modern ones in a decade with new aircraft carriers.

Actually the Indian Brahmaputra class as seen above is an evolved development from the British Leander class, which preceded the British Type 21 Amazon class that the Iranian Alvand and Moudge class traces its evolution..

india is a great natiion.

Iran can be too if the mullahs let educated Iranians run things and make the armed forces professional and have exposure to the world. Iran should be conducting joint large scale military exercises with Russia, China and India an would learn a lot about how modern militaries conduct combined arms operations The Chinese and Russians just embarked on largest joint maneuvers. Iranian officers should be sent to foreign military staff colleges for exchanges. India would be an ideal partner as they have good relations with Iran dating back thousands of years.

Actually Mark they are domestically Indian made and have twice the tonnage of Iranian Vospers which is light frigate and more like a Corvette. The Indian Betwa and Brahmaputra are real frigates.

The Brahmaputra class frigates (Type 16A or Project 16A) are guided-missile frigates of the Indian Navy, designed and built in India. They are an enhancement of the Godavari class, with a displacement of 3850 tons and a length of 126 metres (413 ft). Although of similar hull and dimension, internally, the Brahmaputra and Godavari classes have different configurations, armaments and capabilities. 3 ships of this class serve in the Indian Navy.

china , india, russia have good relationship with US.
The Iran can not join any military exercises with any of then.

now after the Nue agrement many things can be changed.
anyway Inidia Progress is admirable.
we will flow them not only in Milary but in civil engineering , for example IT

Anon 7:30 AM,Mullahs will never allow educated Iranians to run things.They want everything for themselves.

AnonymousAugust 29, 2015 at 4:16 PM
Your posts might have more credibility if you at least learned how to spell correctly.
Also just because someone is a nuclear physicist does not mean they are qualified to run an entire nuclear program that runs the gamut from reactor design/construction all the way to centrifuge design,for this you need capable mangers and administrators to oversee the various programs.On the face of it iran has done fairly well with its nuclear program especially when one looks at the obstacles that were placed in its way.

AnonymousAugust 28, 2015 at 10:47 PM
What?,you mean like india did with the vstol kievs?,how many years late and how much over budget were they again? .It makes absolutely no sense whatsoever for iran to buy clapped out cold war ex soviet navy vessels that have spent years or even decades moldering away tied up at the dockside and then have to spend god knows how much to have to have them completely rebuilt from top to bottom,that strategy might be okay for india with its navies blue water pretensions/aspirations but makes utterly no sense for iran.

Mark PyruzAugust 29, 2015 at 1:59 AM
As always you make an excellent point as both the moudge and brahmaputra are copies/improved copies of older british designs,after all you have to start somewhere.

Yes
design of Centrifuge and Heavy Water reactor does not need any special skill
the design if Drones and missiles too
of coures
belive those NAVY officers here like Admiral Sayari are unqualified , illiterate

The Brahmaputra class are the 2nd generation of indigeneous frigates (the 1st being the Godavari class)of ours and thanks to their SS-N-25 SSM armament are still a competent design, though they have negligible signal suppression capability. However a ship is only as good as its crew and good training is absolutely necessary. Iran will have to make serious investment in its training infrastructure first and have constant interactions with other navies to learn new skills and maintain old ones.All this takes time and our experience is that time invested in training is never wasted.I know that the Iranian political system is overtly religious, but at sea it is only professional competence that will ensure control and even survival. Good luck to the Iranian Navy and its men.