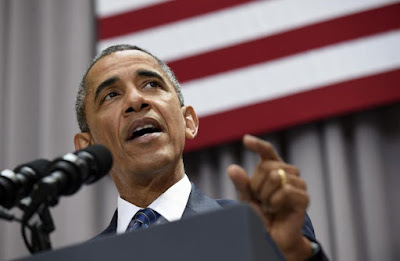 President Barack Obama today gave a comprehensive speech on the nuclear deal with Iran at the American University in Washington. To read the text of the speech, please click here. Following are few highlights:

One can nitpick at many of the assertions made by our President but one has to bear in mind politics as they are in the Beltway.

The end result justifies the rhetoric required to help enable adoption of JCPOA.

On the Iranian side, similar heaps of rhetoric are also being employed.

When only 28% of Americans support and 57% oppose this lousy deal with the terrorist Mollah Regime, "heaps" of something are surely called for:

Those polls are not surprising considering
AIPAC has spent around 11.6M in tv ads to convince the Americans that the deal is bad.

I am actually shocked at what is happening with the us politicians. Some are pushing so hard for Isreal ' s interest more so than their country and commander in chief. How is this not treason?

Anonymous August 5, 2015 at 7:59 PM
The irony is that they find themselves in company with a lot of iranians who see this "lousy deal" as a capitulation to the great satan,but none of the hardliners on either side have any alternative to this agreement apart from the previous status quo,as for the west they were probably lucky to get this deal,certainly the longer they would`ve waited the worse the deal would have got,however the neocons/zionists view anything other than an iranian surrender as a bad deal

This poll was of registered voters who are not representative of most Americans who dont vote at all. These are mostly older Americans. This is called a "sampling Error" in statistics which makes this poll invalid

Secondly who cares if older Americans oppose it

The poll you show is like this poll of Millenials who overwhelmingly support it
http://www.philly.com/philly/blogs/thinktank/Millennials-strongly-back-Iran-deal.html.

The only difference between the two is the millenials will be the ones who would have to go and die in a War with Iran, which learning from the Iraq war they realize they dont want to. So their opinion is a bit more concerning. Nice try though

Are the Supreme Leader-for-Life and the IRGC (who will see a windfall of many, many billions) from this so-called deal, "hardliners", softliners or hard on the outside and soft on the inside (like a nice, ripe avocado)?

No matter which way we cut this deal, it is clear that the U.S. has surrendered. The entire gamut of the sanctions regime, so meticulously crafted over a decade has unraveled. It is hard to believe that it has come down to this.

So what we are reading up on many alternative sites holds water, which is the U.S. testing Iran to alter its behavior in exchange for this massive concession.

But it is delusional to believe that the IRI leadership will change its policies. I guess the U.S. has finally realized that its ME project stands shattered without Iran's acquiescence and participation.

It is a monumental victory for the resistance axis of Russia/ China/ Iran. No doubt.