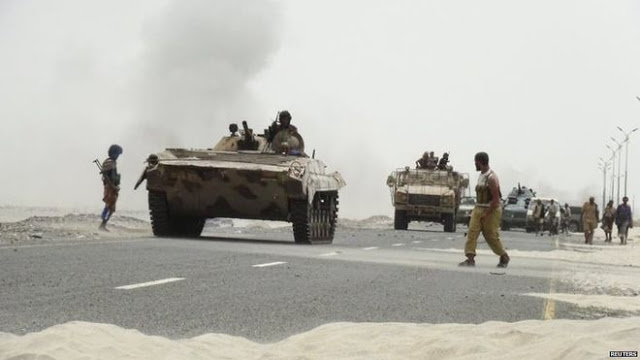 UAE-led pro-government forces today recaptured Yemeni southern provincial capital of Zinjabar from the Houthi insurgents and their allies. Zinjibar had been held by troops of the 15th Brigade that remained loyal to the deposed president Saleh who is allied with the Houthis.

hotis are finished Saudi's have proven themselves to be master military tacticians.... who will be defeated first hotis or Asad?

I'm not getting any feedback on a very simple question which I've been asking for a while; is there any reason why the pace of these setbacks for Houthi forces should slow down before the Arab-coalition reaches San'aa?

I assume the logistic capabilities of the Arab-coalition ground forces, led by the UAE, could be a significant factor in determining how fast and how far the pro-government fighters could advance.

Houthis are more of a priority for the Saudi's.As for Assad the writing is already on the wall for him.

Things would have been very different had the IRGC been involved. Hence, the blockade.

AnonymousAugust 9, 2015 at 1:48 PM
"Saudi's have proven themselves to be master military tacticians"
LOL!,
I`ve read some truly ridiculous statements on this site over the years but this is without a doubt the most ridiculous.
The saudi actions in yemen have been dictated by fear,paranoia and desperation at every step,first they tried bombing from the air and when that 4 month campaign failed the saudis in increasing desperation finally sent in ground troops,they now find themselves in exactly the same situation as the nato axis in afghanistan and the us "coalition" in iraq ie,an open ended occupation,in this case propping up an unpopular dictator who will be seen by a great many of the populace as nothing more than a saudi quisling,facing a determined and very capable resistance.The saudis and co will likely find just as the us/nato forces did that it is very easy to step into a quagmire but very,very difficult to extricate oneself from it,just because the saudis may and that is still a very big "may" occupy the country does not mean the end or defeat of the houthis,indeed it would not surprise me if five years from now the saudis are still trapped in yemen fighting a determend insurgency and unable to leave with a steady never ending stream of dead and wounded being unloaded everyday at riyadh while looking desperately for some sort of face saving deal that will allow them to declare "mission accomplished" and then get the hell out.I guess if you think the saudis "have proven themselves to be master military tacticians" then I guess you must think that george bush jr is one as well,right?

Even if they tried the IRGC could not have done a damn thing in Yemen. The IRGC is a two bit mafia organization designed for the purpose of oppressing Iran and milking it dry.