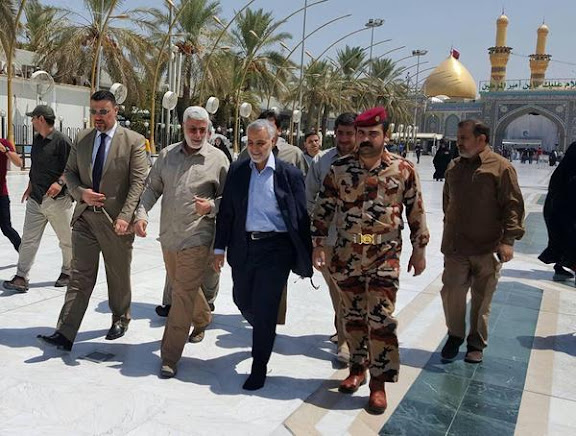 Soleimani's depicted demeanor appears refreshed coming from the renowned Shia shrine, access to which had been a very high-casualty goal of the IRGC and a youthful Soleimani during the Iran-Iraq War (1980-1988). Operation Iraqi Freedom inadvertently served to realize this much coveted Iranian war aim.

Last year, Iraqi Defense Minister Khaled al-Obeidi estimated the number of pilgrims in the city of Karbala for the annual Arbaeen commemoration reached a record 17.5 million, by far the biggest majority of non-Iraqis being Iranian. It's easy to see why popular support inside Iran for the war against ISIL remains high, across the breadth of Iran's relevant political spectrum.

Earlier this week in Tehran, ISCI President Seyed Ammar al- Hakim praised Grand Ayatollah Ali Sistani's fatwa and the creation of PMF, which he states was helped by Iran, specifically identifying IRGC-QF Commander Soleimani for his role in "Iraq's recovery." [source: ABNA] Sistani is Iranian-born.
Posted by Mark Pyruz at 2:42 AM

That's quite the informal media campaign the Iranians have going for Soleimani's extended presence in Iraq, for war against ISIL.

Will it be too sensitive politically for Iraqi government to allow some of those pilgrims to fight ISIL if they volunteer to do so ?

I believe the restriction, which prohibed Iranian shi'ites from visiting the holy mosque/shrines in Iraq, was lifted in the mid 1990s.