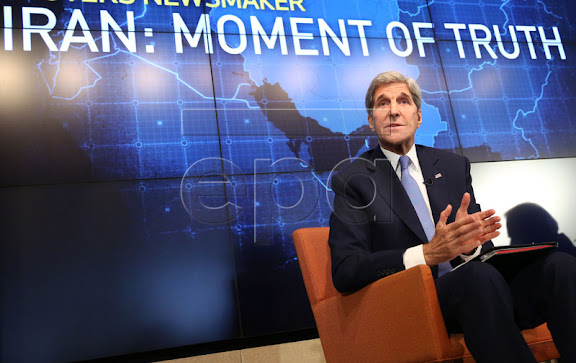 
Violations of an arms embargo by Iran or restrictions on its missile program would not force an automatic reinstatement or "snapback" of United Nations sanctions under a landmark nuclear deal, although other options would be available, U.S. Secretary of State John Kerry said on Tuesday.

"The arms embargo is not tied to snapback," Kerry said. "It is tied to a separate set of obligations. So they are not in material breach of the nuclear agreement for violating the arms piece of it."

The U.N. arms embargo and ballistic missile sanctions were the most difficult sticking points toward the conclusion of marathon negotiations between Iran and six world powers last month.

Iran, backed by Russia and China, had wanted those restrictions to be terminated under the nuclear agreement, which was completed on July 14, but a compromise was struck under which the arms embargo would remain for up to five years and the missile restrictions for up to eight years.

COMMENTARY: Some of the language being used by Kerry in his explanation regarding Iran arms and missiles appears similar to that used by Zarif in selling JCPOA to Iran’s conservatives and military leadership.

It has to be admitted the negotiators at Vienna came up with a clever means of settling what was considered an insurmountable roadblock to an agreement: the issue of Iranian arms transfers and missile development.