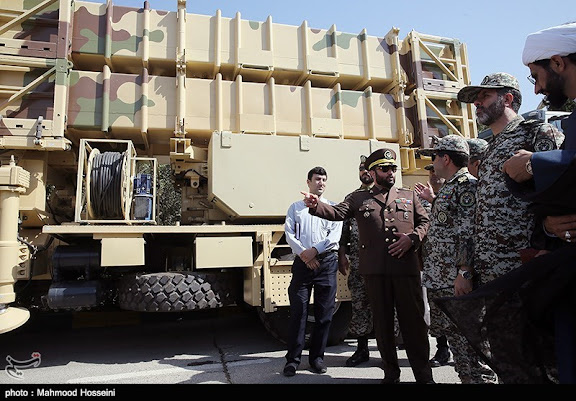 A number of Iran’s manufactured air defense systems, including upgraded radars and electronic warfare equipment, were exhibited on 29AUG15 in Tehran.


One of the uAlalalmnveiled products was the upgraded model of the Keyhan (Cosmos) radar. According to the commander, this new version is a fully mobile radar system with high resolution.

Keyhan is a long-range radar that uses mixed frequencies to identify small flying objects, and is suitable for detecting large number of aerial targets in the electronic warfare. Elsewhere in the exhibition, a variety of ground-based radar jamming systems were unveiled.

The jamming systems, which have been connected to the country’s integrated air defense network, are employed for electronic countermeasures in the fight against aerial threats.

A number of other Iranian radars, including Bina, Nazir and Talash were also put on display in the exhibition.

COMMENTARY: Radars Bina, Nazir and Talash are apparently going to be formally unveiled early in the coming week. This is what was disclosed by Mehr News Agency:

“Fath 14 is a state-of-the-art long-range radar system domestically produced to be attached to missile systems and is capable of discovering hostile aircraft or drones,” said Brig. Gen. Esmaeili.

He said Talash missile defense system is a long- and medium-range system with a domestic missile capability designed and manufactured by the Ministry of Defense and Armed Forces Logistics (MODAFL).

“Bidar is a surveillance and intelligence analyst system and its main characteristic is that it is untraceable and completely home-made,” he said.

Esmaeili also maintained that two other strategic, domestic radar systems dubbed “Dina” and “Nazir” are expected to be unveiled on Tuesday. According to him, these two radar systems have complex technological capabilities that make them quite unique in the region. 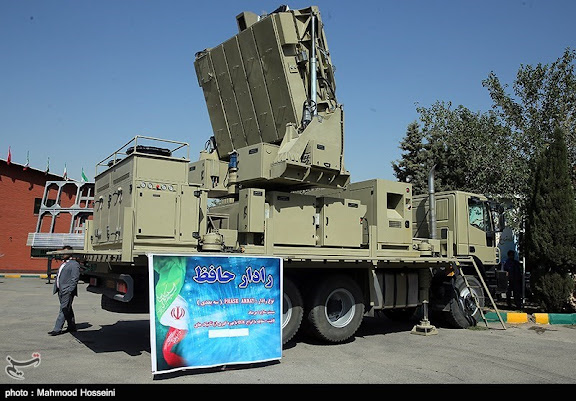 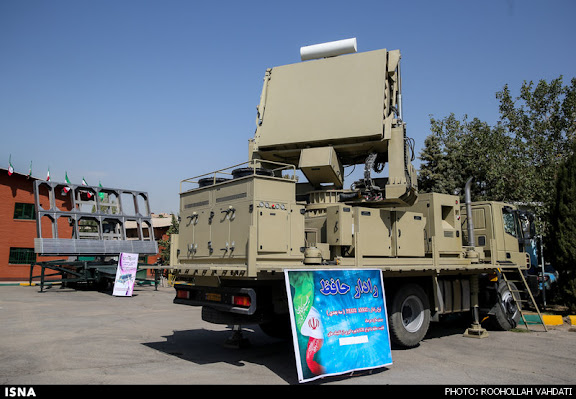 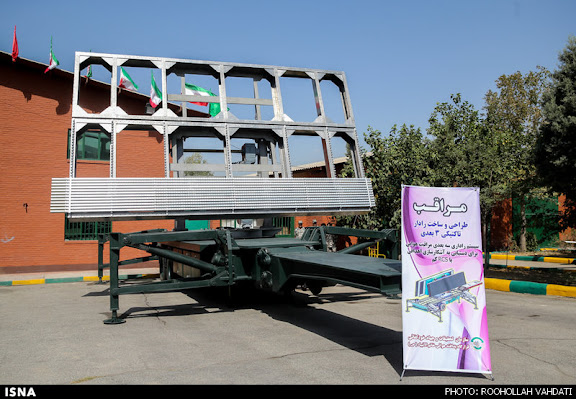 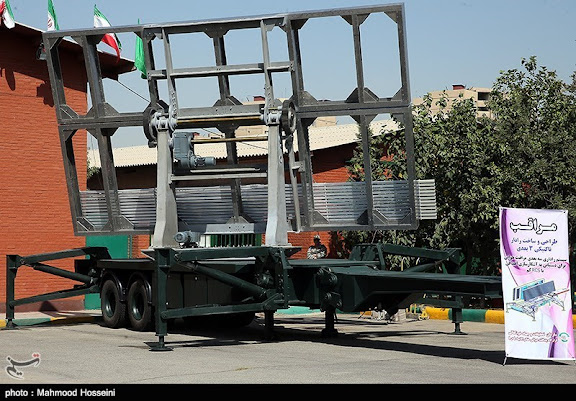 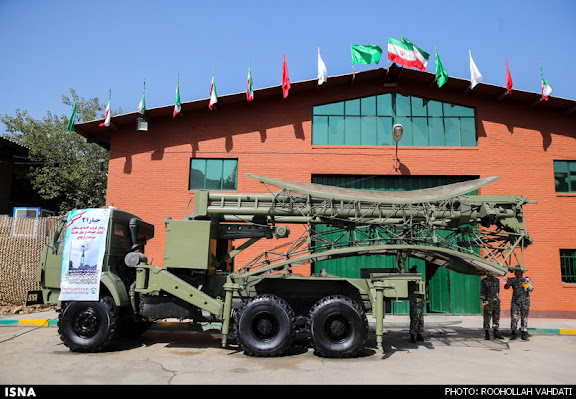 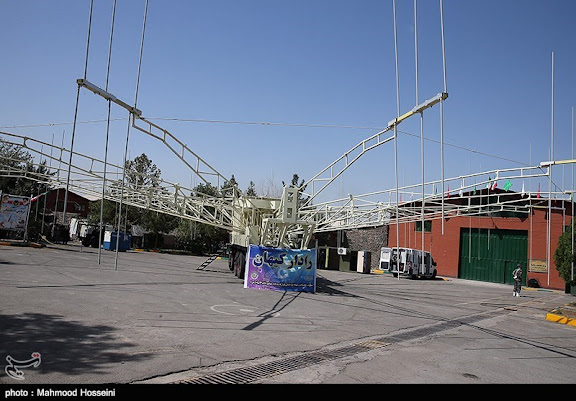 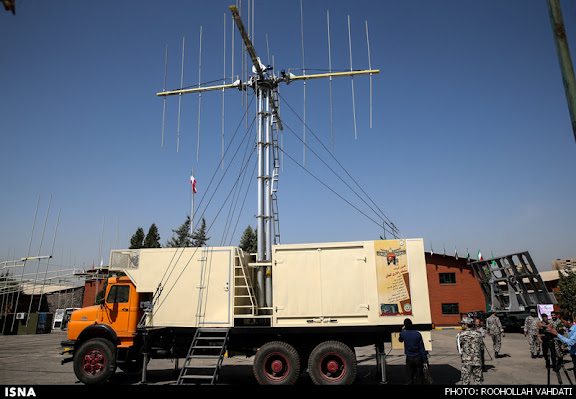 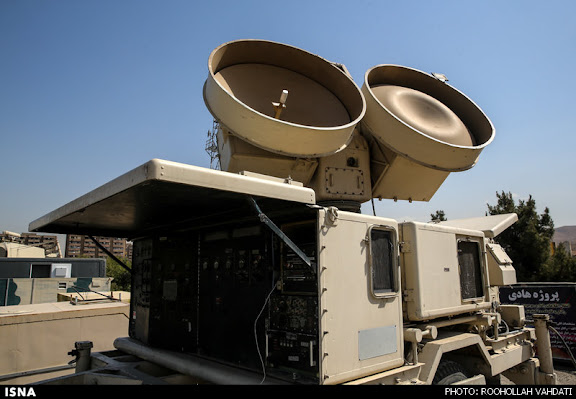 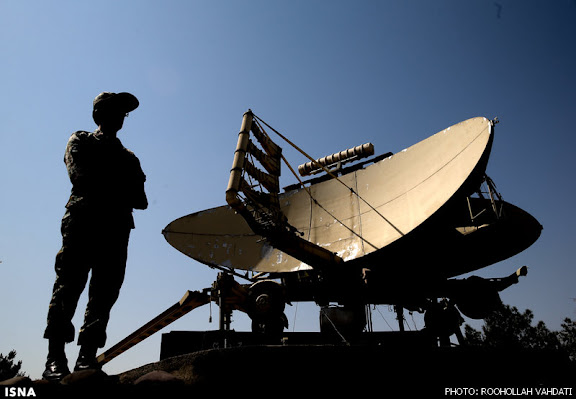 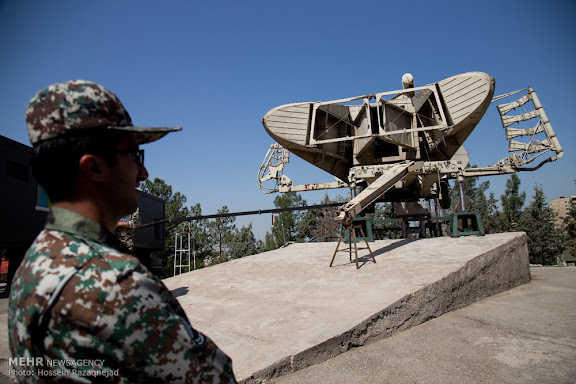 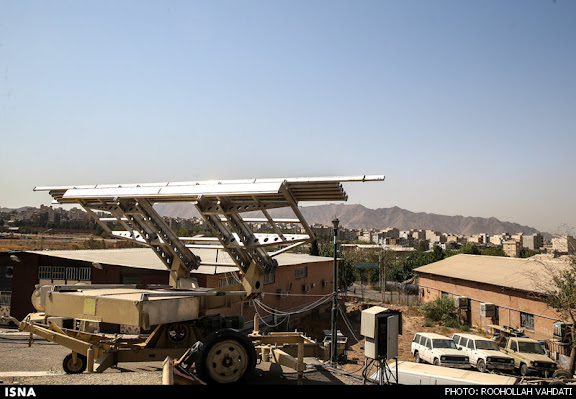 This is a pretty decent effort by any standards. Hopefully, the S-300 will join Iranian air defence soon. Quite impressive. Thanks for posting Mark.

Correct, by the size of the Quad heavy truck mobile launchers it appears to have longer range than the HAWKS or even Sayyed 1 & 2. It is basically modernized mobile SA-2 and you are right, Iranian Air defense chief Gen. Farzad Esmaili said the Talash-3, or Endeavor-3, missile will enable Iranian forces to “shoot down any hostile target,” even at high altitudes. Speaking on state TV, he said the missile was successfully test-fired recently. He did not describe its range.

However, since the Talash utilizes the Sayyad-2 missile, a modernized reverse-engineered hybrid of the American RIM-66 Standard missile and SA 2. The range of the Sayyad-2 missile is not known but is almost certainly at least 60km, which would make it a long range missile. It is unclear what radar(s) the Talash II utilizes, but an unknown multi-spectral sensor was displayed at a recent parade alongside the system. Iranian officials have previously described the Talash-2 SAM as being developed to serve as a medium-range component of the (very) long range SA-5 SAM system, but Iran will likely deploy the system as an independent long range SAM system along with the Bavar 373 or Russian S-300 as well.

Iran has a hobby to display defense equipments regularly to show its military caliber, all shows never coincided with claims whenever contested in real battle ground. Proof is Iraq Falluza, months long offensive by Iranian backed militants with Iranian weapons do not make any breakthrough despite heavy causalities of Iran backed militants, 'WHY', its all about inferior quality and poor ammunition fire power Iranian weapons, with lack of proper real time targeting mechanism. In the same way Iranian much publicized Drone Shaheed 129 with missiles never seen offensive mode in real ground battle either in Syria or Iraq anywhere. Iran Qaher 313 fighter aircraft shameful ceremony by the then president Ahmadinejad, whole world laughed on Iran non operational model as fighter jet, which never seen after that, WHY all such foolish acts done at the expanse of Iran tax payers. It is quite necessary that Iran must self evaluate and not fool them selves nor others. Rizvi/India

Well in that case one could say the same thing about the USAF. They've been bombing ISIS positions for almost a year now with U.S advisers on the ground but with no tangible results in any battle that did not see direct, overwhelming participation of Iran-backed militias lead by IRGC general Qassem Soleimani, like in Tikrit.

As a matter of fact, the Safeer Jeep, which is the most Iranian-made weapon to be deployed in Iraq, has proven to be a success in unconventional warfare. This is why production of the vehicle has increased back at home, where Iran is now producing thousands of these vehicles annually.

Besides, the Iraqi theater isn't a place where Iran can field *every* and *any* weapon it produces, for multiple and obvious reasons. One is that Iraq also receives support from the U.S, and would not risk its relationship with Washington by allowing Iran to flood the ministry of defense with Iranian-made weapons. Two is that many of the weapons that are celebrated in and produced by Iran, like ballistic missiles, tanks, drones and anti-aircraft systems, are mostly useless in the war against ISIS, which is a non-conventional war.

Yes, the Qaher-313 was a rushed unveiling of an uncompleted project. But that doesn't mean all Iranian weapons are incomplete! You mentioned the Shahed-129, but you forget that, unlike the Qaher-313, it was in fact tested and mass produced. It may be undergoing some upgrades to the firing systems, but it's obviously real.

Plus, Iran doesn't use tax money to finance it's military but instead relies on oil revenues.

Iraq Falluza?!!! If you meant Fallujah, that fell because of Iraqi Army incompetence and so far there had been no campaign by Shia militias to reclaim it, but Shia militias did participate and lead the retaking of tikrit which was successful, also the city of Ramadi which was a very important city too have fell because the American trained and equipped Iraqi army fled in wake of ISIS attack and again no Shia militia there, so what battle you are refereeing to?

even if any operation fails its not because ''poo ammunition fire power iranian weapons!!!'', it is because of many shortcomings of Iraqi armed forces(moral, air support, communication and etc), Shia militias are not armed with heavy artillery pieces and heavy armor, they mostly use 107mm MLR and mortars, iraqi army has access to heavy artillery and even Iranian made 122mm HM-20 MLRS were supplied to Army not the militias.

And what do you see in these equipment shown at this event that makes you so critical? are there any thing out of place there? are they fake? or maybe you just don't like Iran and can't accept the new reality so you decide to base your criticism on unrelated stuff.

If you have anything against the authenticity of these radars and air defense system shown here, please share them with us.

There has been a new report by Tasnimnews which has interesting details on Talash AD system developments and its components.

Talash 1 was the initial tested version of Talash, it used an older variant of Sayyad-2 missile and was tested against low and mid altitude targets successfully.

Talash 2 used an improved version of Sayyad-2 which had higher engagement altitude.

Talash 3 was basically Talash 2 which was synced with russian S-200 in order to have higher range.

Then they dropped the S-200 from Talash 3 and added the new Sayyad-3 missile to it, this last system which is the final and definite version is now called ''Talash Air defense system'' and apparently this is the system that will be deployed and enter mass production.

The report didn't specified the Sayyad-3 and Sayyad-2 missile ranges, according to report the Talash is consisted of 5 components.(I use the exact persian translation as I don't know the correct terminology)

Each Talash air defense unit will be consisted on three launchers, two command and control vehicles and radars.

Also sayyad-3 launchers will have wider and longer canister in order to accommodate the missile.